Charlie Purdue ready to bounce back after Tokyo selection snub 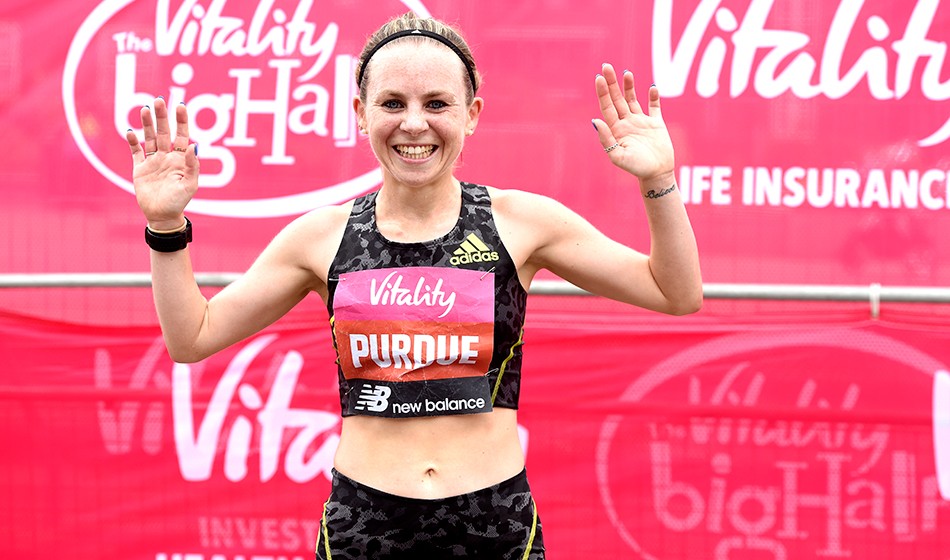 After the pain of missing out on the Olympic Games, the British marathon runner is looking forward to a return to racing 26.2 miles on Sunday in London

Charlotte Purdue allows herself a wry laugh. Asked if the pain of missing out on the Olympic marathon had been eased by the fact that the stifling heat and humidity of Sapporo looked so tough to run in, she says: “My coach [Nic Bideau] was out there and said it wasn’t as bad as Doha [the 2019 World Championships marathon], but it did still look pretty brutal so, yeah, that did help a little bit.”

The laughter doesn’t completely mask a lingering tinge of frustration, though. Purdue has, for the most part, moved on – a process which has been helped by having the Virgin Money London Marathon as a target – but there’s little doubt that the controversy which saw her not selected for Tokyo 2020 was a heavy blow.

A personal best of 2:25:38 at the 2019 London Marathon had given her the qualifying standard, while British Athletics had given every indication she was in prime position for a place. Purdue says she even ran the aforementioned and notorious World Championships marathon – a race in which she was one of the 28 of the 68 starters who didn’t finish in the searingly hot and humid conditions – purely because the governing body had recommended she do so as it would provide ideal Olympic preparation. She would have far rather attacked a fast time on the streets of Chicago or Berlin.

It was also their recommendation that she sit out the Tokyo trials in March due to a bone stress to her femur having caused her to curtail training and that she should, instead, turn her focus towards being fully fit for Sapporo.

To miss the trials, Purdue knew, meant that nothing would be guaranteed but the signs were she would be on the plane to Japan. Steph Davis took an automatic spot when she won the Kew Gardens race, an event which Jess Piasecki and Steph Twell also missed due to their own injury problems.

But it was the latter trio who got the Olympic nod, leaving Purdue perplexed to say the least. At the time the 30-year-old said she felt like she had been “thrown under a bus” and appealed the decision, albeit unsuccessfully.

After a perhaps understandable motivation slump, the spring has returned to her step and London now represents a new beginning. While she won’t completely deny the notion that there is a point to prove, it is overridden by the simple desire to find the kind of form she was in when she last toed the marathon start line in the British capital two years ago.

“It was really frustrating because I was advised not to run and to focus on getting ready for the Olympics,” she says of the selection episode. “The wording was kind of … not telling me I was going to be selected – I knew that not doing the trial meant I wasn’t guaranteed – but they’d given me an indication that I was in a good position.

“Then just to be told on the phone that I wasn’t selected because of my injury risk, I was really gutted. I did do a 90-minute run on the day of the trial, so I wasn’t injured at the time, I just hadn’t done the training.

“I didn’t really know what to do because the whole of the last two years and longer had been geared towards making the team for Tokyo.

“Having the London Marathon in October was a good target. When I didn’t get selected and I got back into running and training again it was good to have that focus.

“I wouldn’t say I got over it pretty quickly but once I knew that my appeal was unsuccessful, I just had to go ‘right, move on’ and focus on getting back to being fit.

“I’m still gutted about it deep down, but I just want to move on now. Tokyo is done, the race is done. I just want to get back racing and back to fitness.”

The signs so far have been good. Purdue’s first race since February of last year saw her win the Big Half for the third time, lowering her own course record to 69:51.

Then, at the Great North Run in Newcastle recently, she ran even quicker with 68:49 to finish third behind Hellen Obiri of Kenya and fellow Brit Eilish McColgan.

Whereas the London Marathon presents the chance to automatically secure a place in the British team for next year’s World Championships, no plans or targets have been settled upon for 2022. With the Commonwealth Games, European Championships and the usual glut of big road races also on the menu, there are a number of options to consider but first will come the task at hand.

“I’ve actually surprised myself how I feel like everything’s clicked back into place,” says Purdue. “I think if I’d been racing all the time, then definitely it would have been like more proving a point but now it’s just about me getting back out there and picking up from where I left off.”

As ever with the marathon, it’s not just about who finishes first. There will be a number of subplots to keep an eye on over the coming months and races, with major championships qualifying standards – at the World Championships, Commonwealth Games and European Championships – to aim for.