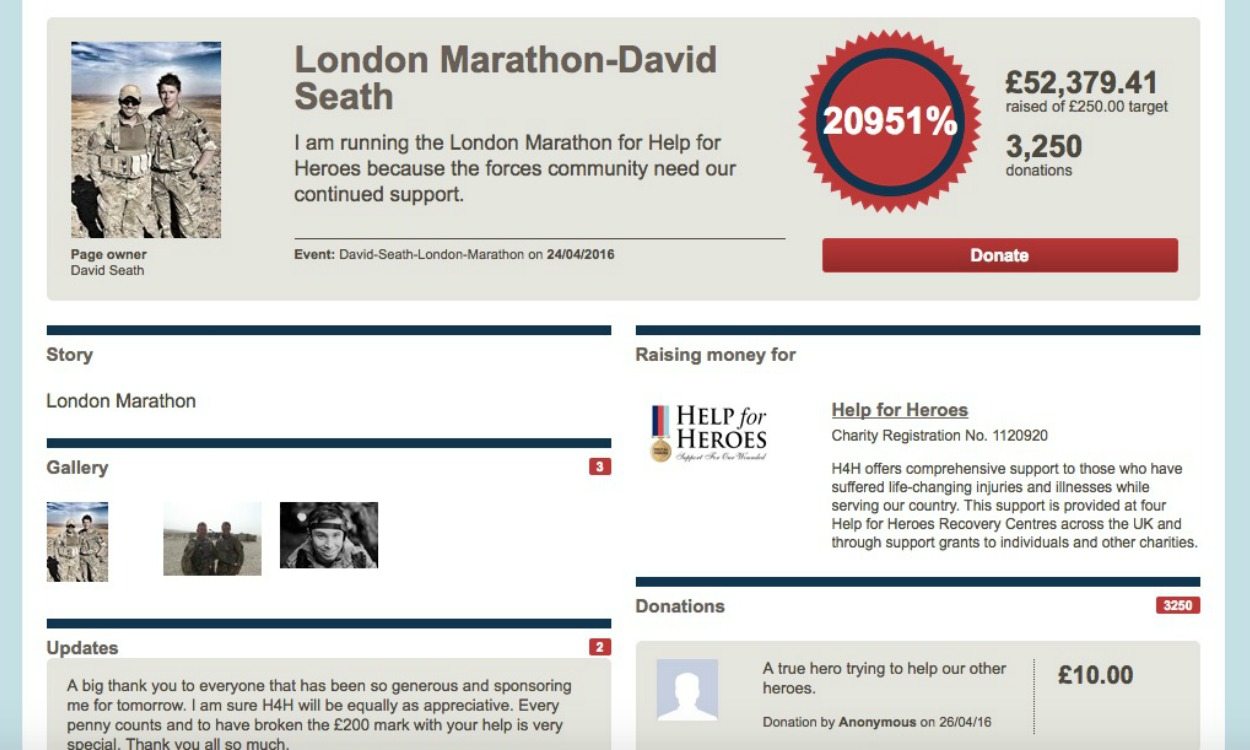 More than £125,000 has been donated to Help for Heroes following the army captain’s death when running for the charity at the London Marathon

Tributes have been paid to London Marathon runner David Seath who collapsed while taking part in this year’s event.

Over £50,000 has been donated to the army captain’s Just Giving page and more than £75,000 to a fundraising page set up in Capt Seath’s memory.

The 31-year-old from Cowdenbeath in Fife had been running to raise money for the charity Help for Heroes.

A serving officer in the British Army, Capt Seath collapsed at the 23-mile mark and, although he received immediate medical treatment, he later died in hospital.

In details released by the Virgin Money London Marathon, Capt Seath’s parents Libby and Pete, his brother Gary, his girlfriend Gabby Judd and his aunt Morag paid tribute and welcomed donations in the army captain’s memory to his Help for Heroes fundraising page.

Libby Seath said: “David has achieved more in 31 years than most people do in 70. He lived his life on the edge and to the full. He was running to raise money for Help for Heroes, a cause which was very important to him.”

Lieutenant Colonel Jon Cresswell, Commanding Officer of 29 Commando Regiment Royal Artillery, also paid tribute and said: “The Regiment was devastated to learn of the tragic loss of Captain Dave Seath during 2016’s London Marathon. Dave was an outstanding commando officer, a natural leader and a true gentleman. He was my Assistant Adjutant and so I knew him very well. He served on operations in Helmand with 19th Regiment Royal Artillery before joining the Commando Gunners and earning his green beret.

“Witty, charming and polished, Dave was a fabulous host and stylish performer. As such he was the obvious choice to lead the Blue Peter Ten Tors team last year. Selected to train the future officers of the Afghan National Army later this year in the rank of major, Dave had a great career ahead of him. The thoughts of the Regiment are with Gabby and Dave’s family and friends at this tragic time. We have lost one of the great characters of our Regiment and take strength from the memory of his example and leadership.”

“We will walk as one, the final three miles of the marathon, starting where he fell,” Capt Walker-McClimens wrote.

“We’re raising money for Help for Heroes, a cause he ran and died for. He was our friend and hero. Please share this page far and wide.”