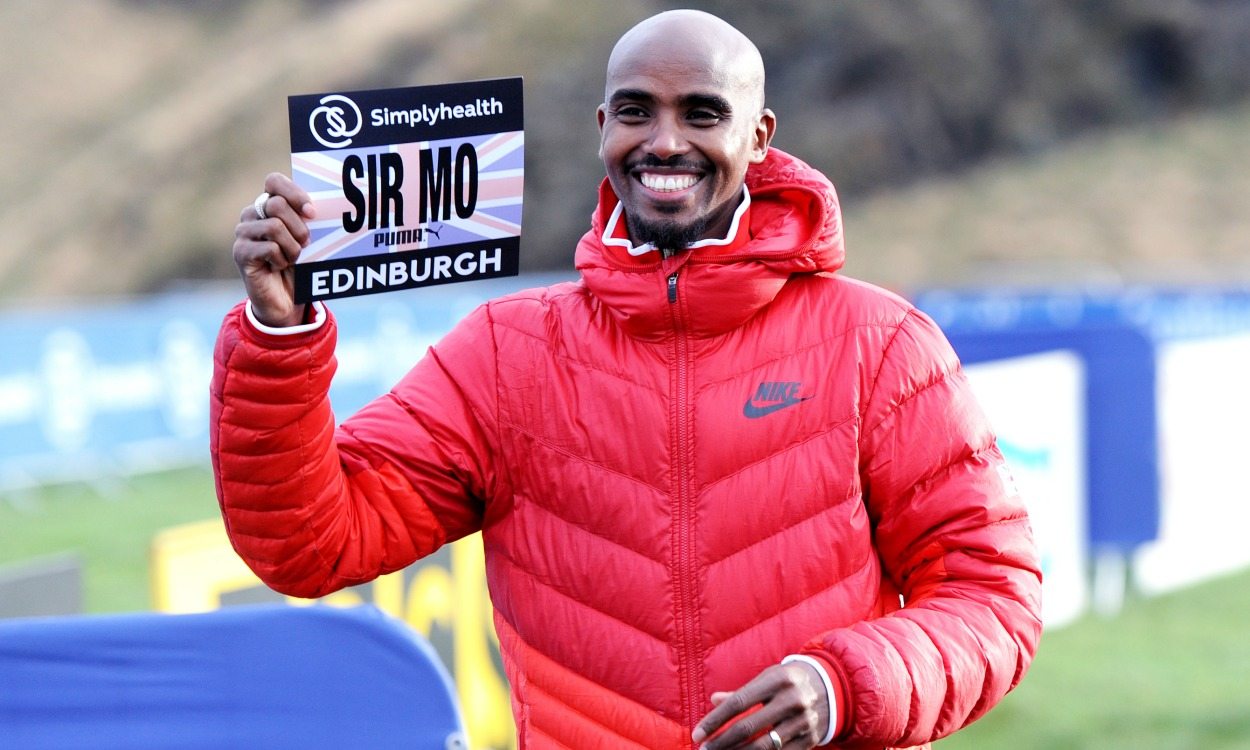 Sir Mo Farah has revealed that Saturday’s Simplyhealth Great Edinburgh XCountry is likely to be the last cross country race of his career.

The newly-knighted four-time Olympic champion will aim to get his 2017 off to a winning start in Holyrood Park over 8km. However, his task will be far from easy in a field including the likes of American three-time champion Garrett Heath, who defeated him last year.

Farah, who says “training is okay”, is building towards the last hurrah of his track career at the IAAF World Championships in London this summer, before his attention turns to the roads and longer distances. And he will take time to acknowledge there are other events in the coming year which will be appearing on his running agenda for the final time.

“I think it’s going to be pretty much my last cross country because I have to be able to plan for the road,” he says of his weekend’s mission. “I think you’ll probably most likely see me competing at 15km, 10 miles and half-marathon and then the marathon. In order for me to learn about the marathon I need to try and compete more (at the longer distances).

“I’m lucky to have had the career I’ve had and at some point everything has to come to an end. It’s not what I want to do but at the same time I feel it’s right. I’d like to be able to see what I can do at the World Champs and then I want to move to the marathon. This is it, I guess.”

There is sure to be a sizeable, supportive crowd in attendance in the Scottish capital. Given his new title, it remains to be seen which name the British public will use to cheer him on. The man himself insists little has changed.

“It’s same old Mo,” he smiles. “Everybody who knows me as Mo can still call me Mo! It’s nice to have the title but, at the same time, nothing’s changed. It’s still a cross country tomorrow, right?”

He added: “To be given the title, it’s something I never dreamed of as a kid, coming to Britain and not speaking a word of English – there’s no word really to describe it.

“It’s an honour to be able to be called Sir. It’s something I never dreamed of as an athlete. To be able to represent your country was very exciting. I remember the first time getting a Great Britain vest was amazing and to have the career I’ve had and to be able to achieve what I have for my country, and then to be recognised for it, is incredible.”

As Olympic triathlon champion Alistair Brownlee insisted, however, Farah should have had further recognition in the BBC Sports Personality of the Year awards last month. Farah failed to make the top three in the public vote, despite achieving the Olympic ‘double double’ over 5000m and 10,000m in Rio this summer.

“I would have voted for Mo,” said Brownlee. “His achievements are incredible, and what stands out about them is that no one from this country has ever done them before, and there is a good chance that no one will again. It’s not like someone does it every year — it is a complete one-off in what are two very competitive, blue riband athletics events.”

Farah admits to some bemusement that he did not fare better.

“It was a bit weird,” he says of the award which went to Sir Andy Murray, with Brownlee second and show jumper Nick Skelton third. “I just thought ‘oh’. I thought I might have been top three, I don’t know if I would have won it, but it’s not something that’s within my control.

“What can you do? What am I control of? Winning races and doing well for my country – I’ll continue to do that. That’s what drives me and no one can take away what I have achieved. I’ve got my medals and that means more than everything else.

“Alistair’s a great athlete and I’ve got a lot of respect for him coming out and saying what he did. No one really needed to say anything and it’s nothing that’s really within my control.”

When it comes to the race at hand in Edinburgh, the expected firm going should help Farah. Defending champion Heath is not the only athlete who will be preying on the 33-year-old’s mind, however. He can see a strong challenge coming from the rest of the USA team, as well as one of his own compatriots.

“We’ll have to fight it out and see what happens. Cross country is what it’s all about – you never know what you’re going to get, do you?”