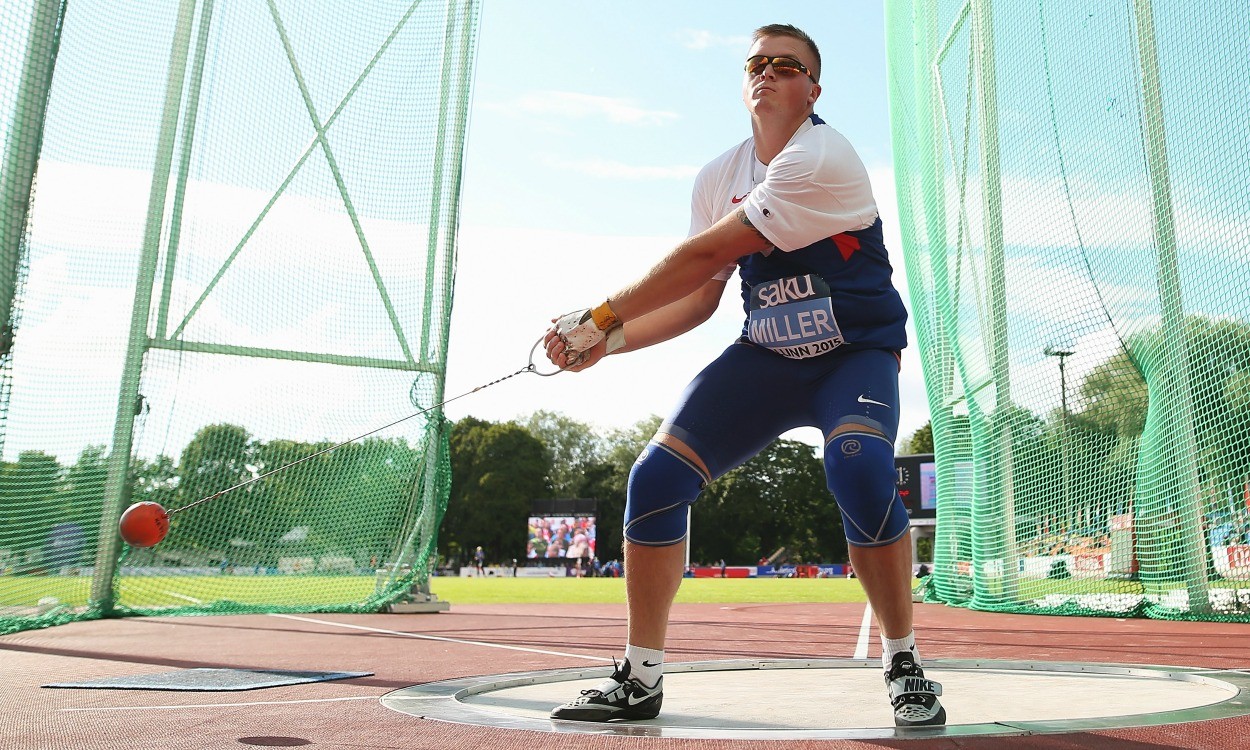 Nick Miller became the first British athlete to win a men’s European under-23 hammer medal on Friday and he did it in style, throwing 74.46m to get gold ahead of Russia’s Valeriy Pronkin.

“I’m very happy to win as that’s all that matters today and that’s what I came here to do,” said the 22-year-old Briton, who also explained how an old knee injury had been bothering him during the competition.

“At a championship it doesn’t matter whether you win by a centimetre or ten metres so that’s all I wanted. There was a lot of pressure wearing the blue number as I always want to do well for Great Britain and for myself, so there’s always pressure. The goal now is the British record!”

Earlier on in qualifying in the women’s event, French thrower Alexandra Tavernier broke the championship record to progress to Saturday’s final. The 2012 world junior champion threw 72.98m in group B to easily beat the automatic qualifying mark of 68.50m.

It was not long after Miller had won Great Britain’s first medal of the championships that two more were claimed for the nation. Jip Vastenburg of Netherlands won the 10,000m title in 32:18.69 after a strong finish and behind her both Rhona Auckland (32:22.79) and Alice Wright (32:46.57) clocked PBs to secure silver and bronze respectively.

Russia’s Nikolay Markov won the 20km race walk in 1:23:49 ahead of Spain’s Alvaro Martin with 1:24:51, while Czech Republic’s multi-talented pre-race favourite Anezka Drahotova had to settle for silver in the women’s event as Russia’s Mariya Ponomaryova broke the championship record with a 1:27:17 PB to Drahotova’s 1:27:25.

In the women’s triple jump, Dovile Dzindzaletaite was victorious with her Lithuanian record 14.23m (+1.9).

Leading the competition throughout, Hungary’s Xenia Krizsan scored a total of 6303 points to take the heptathlon title ahead of Russia’s Lyubov Tkach with 6055 and Austria’s Ivona Dadic with a 6033 national record tally.

The morning’s action had seen British sprint hurdlers David King and David Omoregie clock 13.74 and 13.85 to win their respective heats and secure their spots in the final, while France’s world junior champion Wilhem Belocian – the European under-23 rankings leader ahead of the two Brits – was a late withdrawal from the event.

After her 13.00 in the 100m hurdles heats, Switzerland’s Noemi Zbaren equalled the championship record with 12.88 in her semi final.

Britain’s world junior silver medallist Shona Richards went quickest in the first round of the 400m hurdles with 57.40. In the men’s event there was a shock exit for Russia’s European Championships fourth-placer Timofey Chalyy as he was a way off his 48.69 best with 51.12 for third in the final heat. Poland’s Patryk Dobek went quickest overall with 49.83 in the first heat.

There were no real surprises in high jump qualifying as Russia’s Mariya Kuchina, Italy’s Alessia Trost and Belgium’s Nafissatou Thiam were among those to make it safely through to Sunday’s final.

Fresh from clocking a Slovenian record of 1:46.00 at the beginning of the month, Zan Rudolf was the quickest in 800m qualifying with his 1:49.17 in the third heat. Britain’s Jamie Webb was also among those to progress to Saturday’s semi finals with his 1:49.95 for sixth in the first heat, while Ireland’s Mark English also made it through with his equal second place finish in 1:52.91 in heat four, placing just ahead of Britain’s Theo Blundell.

» Results for the first two days of European Under-23 Champs action can be found here, with the event resuming at 9.40am local time (7.40am UK) on Saturday