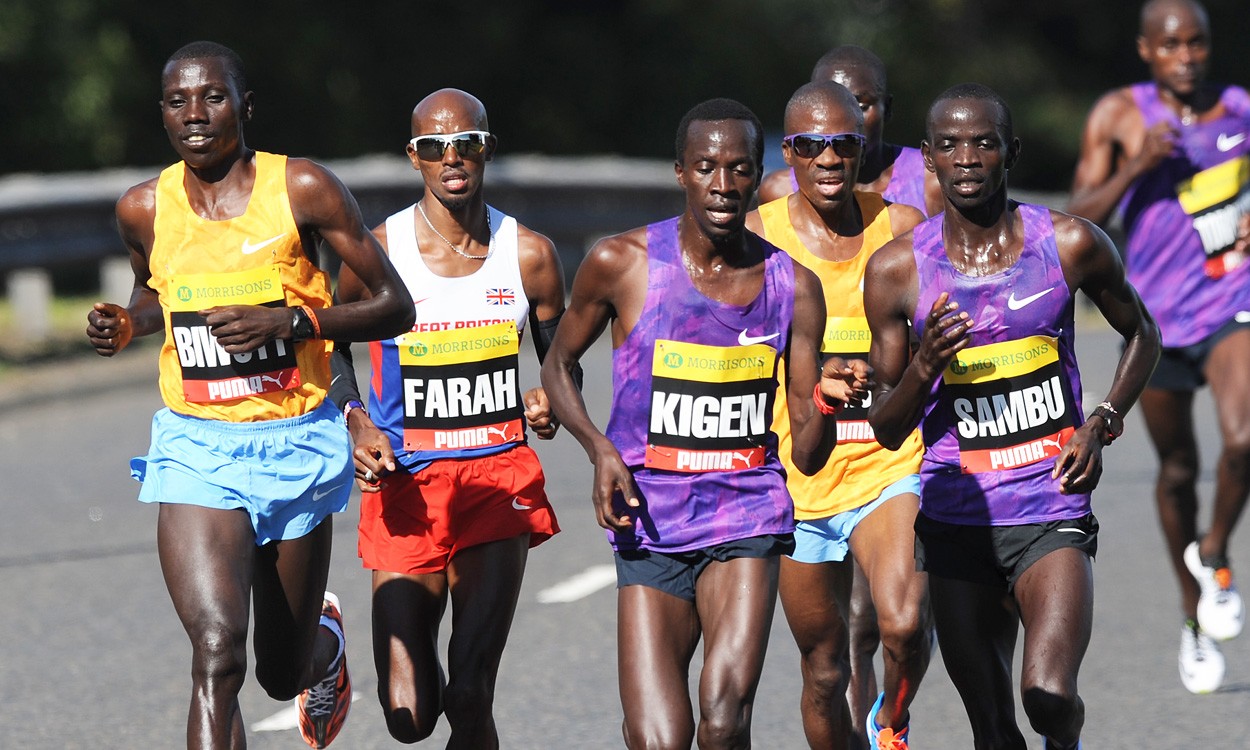 The double Olympic, world and European track champion runs the quickest ever half-marathon by a European athlete to beat Kenya’s Stanley Biwott

Mo Farah became the first back-to-back winner of the Morrisons Great North Run since 1992, leaving it late again to cross the line two seconds clear of Stanley Biwott of Kenya in 59:22.

Two weeks after completing a second successive 5000m-10,000m double at the World Championships, Farah used his trademark lightning finishing speed to pull away from Biwott with less than 200m remaining.

The pair were clear from 15km when Biwott led the move away from Kenya’s Mike Kigen, who last year pushed Farah all the way to the line, and Stephen Mokoka of South Africa.

Farah’s time is the fastest half-marathon by a non-African, although his 59:32 from Lisbon earlier this year remains the European best because of the extent of the downhill gradient over the Newcastle to South Shields course. Kigen was third with 60:10 – 30 seconds ahead of Mokoka.

At around 12km Biwott moved to the head of the field and appeared to be trying to pull away, but Farah was always just a few strides behind and they went through 15km in 42:28.

Not long after they passed 10 miles in 44:41, Farah moved back on to Biwott’s shoulder. On the final downhill section, with 2km to go, where Farah lost ground on eventual winner Kenenisa Bekele two years ago, the Brit tried to move away but Biwott came back and they were neck and neck even as the 400m sign was passed.

Of Biwott, Farah said: “He definitely made me work hard today and tested me.

“He was trying to get rid of me (over the last couple of miles) and credit to him.

“With two miles to go, I was really hurting but he slowed down a bit near the end and I was strong mentally.”

Callum Hawkins clocked 63:33 to finish as the second British athlete after Farah and 11th overall.

David Weir achieved a record-equalling sixth Great North Run victory in the men’s wheelchair race, crossing the line 1:58 ahead of the rest of the field.

Weir, who holds the course record of 41:31, was untroubled by 2010 London Marathon champion Josh Cassidy of Canada, who was third in 45:20 as Britain’s Simon Lawson repeated his second of last year.