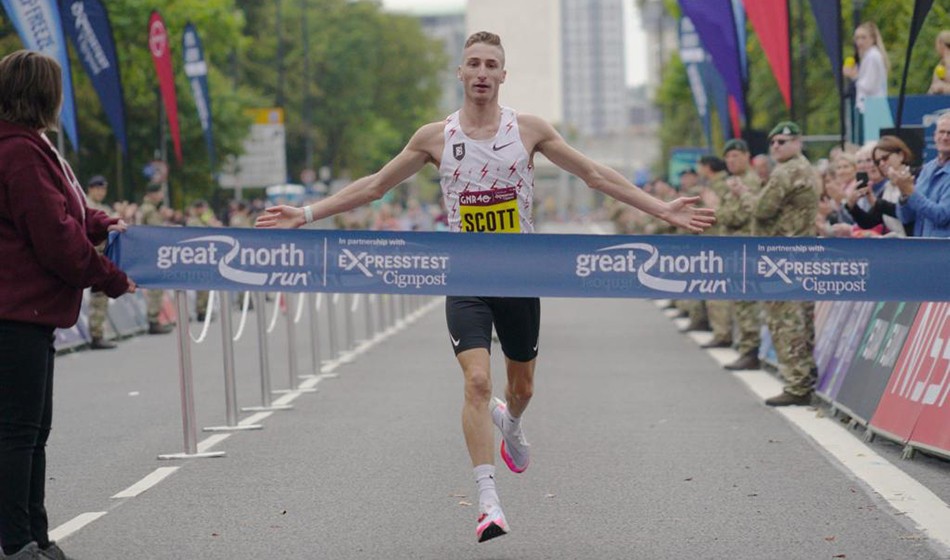 The Great North Run celebrated its 40th birthday in fine style as mass participation running returned to Britain’s streets and the elite athletes produced a memorable day of racing with some terrific performances befitting the landmark occasion.

The theme tune to the film Local Hero is synonymous with this event and could be heard across the loudspeakers as the fields assembled at the start line in central Newcastle.

Come the finish, there was also a local hero for the crowds to cheer home as Marc Scott, who lives and trains in America but hails from Northallerton in Yorkshire – a short drive south from the race – won his battle with Kenyan Ed Cheserek.

In the women’s contest, world 5000m champion Hellen Obiri was triumphant in the second half-marathon of her career after overcoming the stern challenge of Eilish McColgan, who looked very much at home in what was her debut over the 13.1-mile distance.

For Scott, it represented a victorious end to what has been a topsy-turvy year. The 27-year-old produced a string of impressive performances across a range of distances in the early part of 2021 before securing the British 10,000m title at the start of the summer.

However, there was disappointment with his Olympic performances in Tokyo, which were hampered by foot problems, as he failed to make the 5000m final and was 14th in the 10,000m.

Scott had a spring back in his step at the Great North Run, however. He and Cheserek had broken away from the eight-strong group which had led the way in the early stages. After relatively sedate opening 5km sections of 14:28 and then 14:41, a time of 14:15 between 10km and 15km signalled the beginning of the fight for first place.

Energised as he came back over the Tyne Bridge for the second time on the revamped course which had been changed due to Covid restrictions, Scott looked to be enjoying himself as he made light of the tough, hilly finish and ultimately had time to take in the adulation of the spectators as he hit the line in 61:22, with Cheserek finishing nine seconds back.

American Galen Rupp won the sprint for third as he clocked 61:52 to just see off Britain’s Jake Smith (61:54), while Emile Cairess made an impressive half-marathon debut with 61:57 for fifth. Olympic marathon bronze medallist Bashir Abdi was sixth in 62:08, while prolific Australian track racer Stewart McSweyn ran 62:52 for eighth. 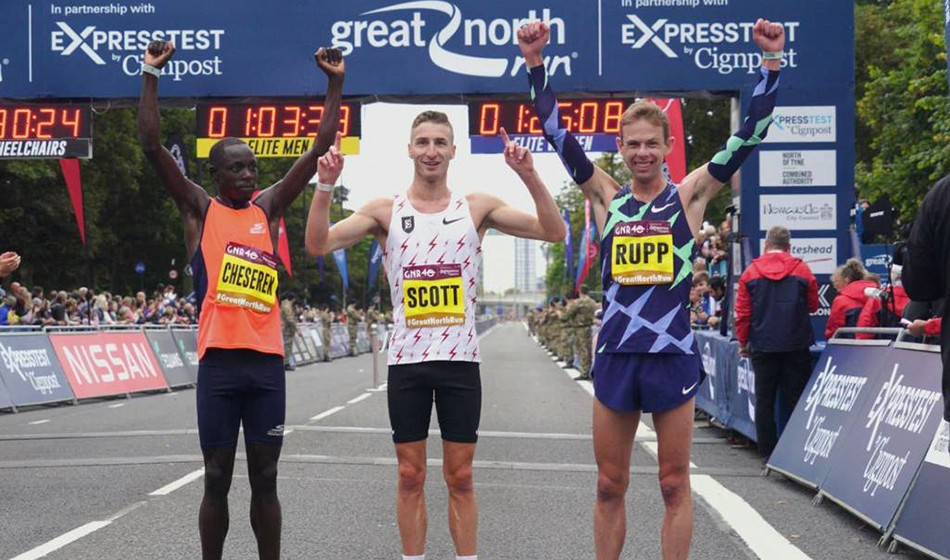 “I’m really delighted to win such a prestigious event,” said Scott, who succeeded six-time winner Mo Farah. “It was really difficult – the last three miles are all pretty much uphill – and it was hard to get into a rhythm.

“It’s incredible [to be running in front of people again]. Even just to have the mass participation back, it’s such a good feeling. The streets were lined with people, which is what the Great North Run is known for.

“Especially being from just 30 minutes down the road, it was good to have people shouting my name the whole way. It’s great to follow in the footsteps of [Kenenisa] Bekele and Mo.”

When it came to the women’s race, Obiri and McColgan had separated themselves from the field after 5km, at which point the Olympic silver medallist made the first of a number of attempts to shake off her British challenger.

By the 10km mark, passed in 32:02, they were locked together and 20 seconds ahead. After 15km, Obiri aimed to make a decisive uphill move but again McColgan, whose mother Liz won this event three times, hauled herself back into contention.

The Scot’s resistance was finally broken in the closing stages, however, and Obiri hit the line in 67:42, six seconds ahead of McColgan who immediately went to third on the British all-time rankings with her time of 67:48.

The woman she moved down to fourth on those lists, Charlotte Purdue, produced a strong finish to clock 68:49 for third and provide another confidence boost ahead of tackling the London Marathon at the beginning of next month. 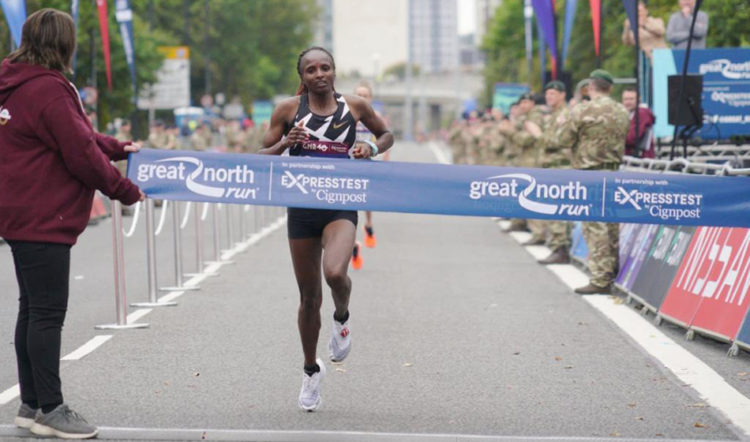 Hellen Obiri on her way to victory. Photo: North News

“I did what I wanted to do for today,” said Obiri, who had finished second in the 5000m at the Diamond League final just a few days earlier. “The first half was very good but Eilish was very strong and there was a lot of pressure on me running with her.

“To run 67 minutes so soon after Zurich is very special for me.”

While McColgan had been eyeing her mother’s PB of 67:11, she was delighted with her day’s work and now full of confidence ahead as she looks towards a future on the roads which will feature the marathon.

“I wanted to be competitive today. I found myself broken away with Hellen and I thought ‘I’d better commit now!’ and I can’t really ask for anything more from today.

“Hellen is such a strong athlete that’s it almost a privilege to be that close to her in what is my first half-marathon.

“I felt more comfortable on the roads than I do on the track. I think, because I’m so tall, it was nice to have my own space – I had the whole road to stride on and it surprised me how comfortable I did feel and it gave me a lot of confidence being next someone like Hellen.

“I still have ambitions on the track but this is the start of my progression towards moving up and moving towards the marathon.” 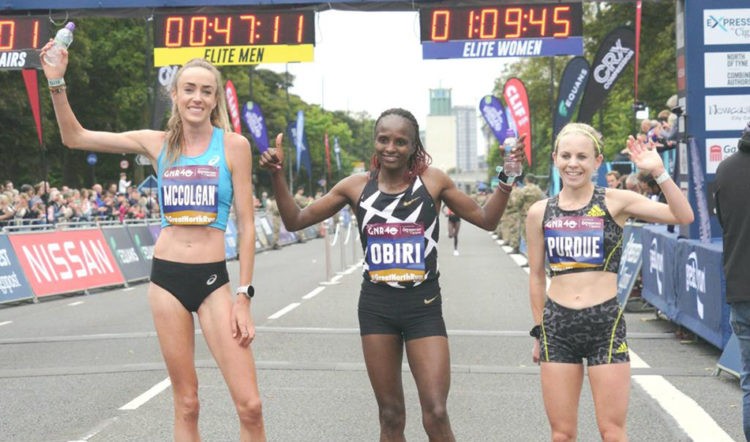 The wheelchair events began the day’s racing and Sean Frame produced a dominant performance to finish first, clocking 49:51 ahead of Simon Lawson’s 51:20 and Callum Hall’s 51:27.