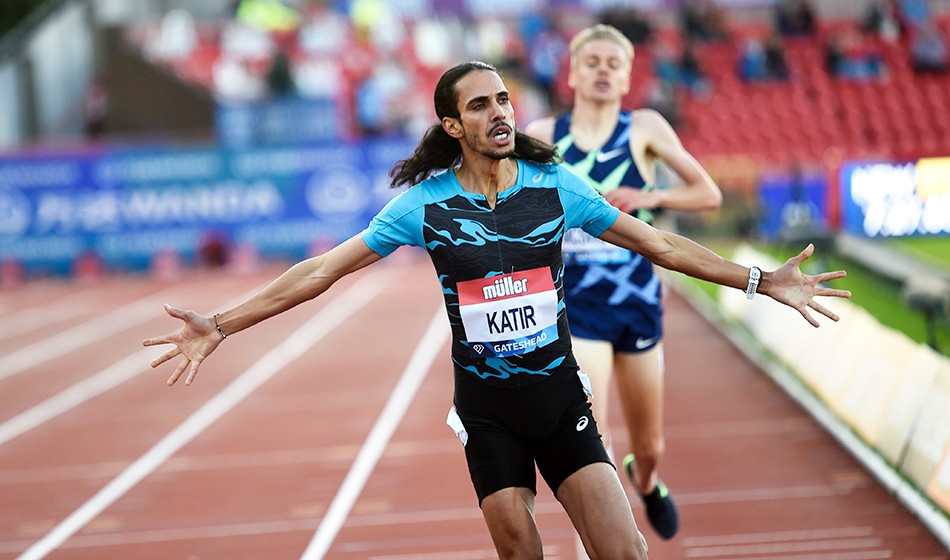 The men’s 3000m at the end of the Müller British Grand Prix in Gateshead had originally been built around Mo Farah’s likely appearance. But it still provided the clear highlight of the Diamond League on Tuesday (July 13) with some great British performances.

Adam Clarke paced it perfectly through the opening kilometre in 2:30.60 and Stewart McSweyn was ahead at 2000m in 5:03.74 but Katir, the former Moroccan, was on his shoulder. The Australian ran 59.32 three laps out and 58.83 for the penultimate circuit but Katir was still full of running and ran his last lap inside 55.82 which means his last three laps were inside 2:53 and the last kilometre was 2:23.90.

Katir, who runs the 5000m in Japan, said: “I had a dream to be part of the Olympic Games. I’ve worked very hard to achieve this goal and this performance is the consequence of working hard and training in the mountains.

“The first time I won in Gateshead it gave me a lot of confidence and positive energy and I thought ‘hey, I can make it’. Of course I will respect all the other athletes that are much better than I am (in Tokyo), but I’ll fight as much as I can to make the podium. First of all I have to get to the final and with all the respect for the other participants.”

Apart from the Spanish and Scottish records falling, Yemaneberhan Crippa also set a Italian mark of 7:37.90.

Elliot Giles just edged Jake Heyward in a surprising Emsley Carr Mile. All eyes were on past winner Jake Wightman, who had expressed a hope for a sub 3:50 mile. Erik Sowinski took the leaders through 400m in 55.73 and 800m in 1:53.82 with the target looking on as Wightman took command on the third lap.

The Scot had only just come down from altitude training and seemed to ease back through 1200m in 2:54.46 (60.44 for that third split) as Giles, Heyward and Archie Davis looked menacing.

Everyone expected a major acceleration from the world fifth-placer but Giles kicked past on the final bend and there was no response from Wightman, who did not get the pre Tokyo boost he was hoping for.

Heyward, who partners Wightman and Josh Kerr in Japan, finished well and as he thrust his arm out at the finish many thought he had got the verdict but Giles won it 3:52.49 to 3:52.50, encouraging PBs for both, as Davis also set a PB in third in 3:54.27. 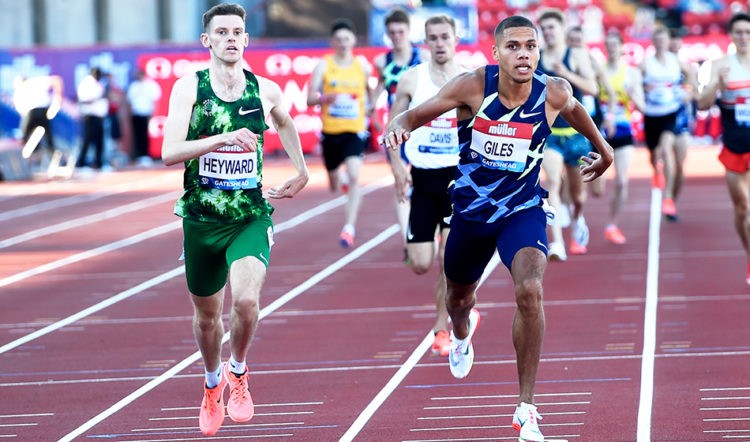 Giles said: “It was great – double the distance double the pain and double the fun. I did three races in six days and shows I’m in good form and this is the icing on the cake.

“I didn’t realise Jake was closing on me so much and then I saw he was coming up behind me so that was a really rookie error on my behalf, but luckily I managed to push through and grab that win.”

Giles of course goes in the 800m at Tokyo but his two team-mates did not compete in the two lap race at Gateshead with Daniel Rowden being a late withdrawal. The race was actually won by American Isaiah Harris in 1:44.76 from Commonwealth champion Wycliffe Kinyamal’s 1:44.91 and neither made their respective Olympic team with Harris a frustrating fourth in their trials. Peter Bol finished fast for third in 1:45.22.

US trials winner Trayvon Bromell is the clear favourite for Tokyo but up and until now he had not proved himself outside of America and was only fifth in Monaco last Friday and his only other outdoor run outside the US was a last place in Jamaica in 2019. Yet in Gateshead he proved himself though as he won easily in 9.98/0.4.

The American said: “I’ll take that win and I really want to get back into training, get my body under wraps, recover and get ready for Tokyo. I want to be healthy and I’m blessed for that.” 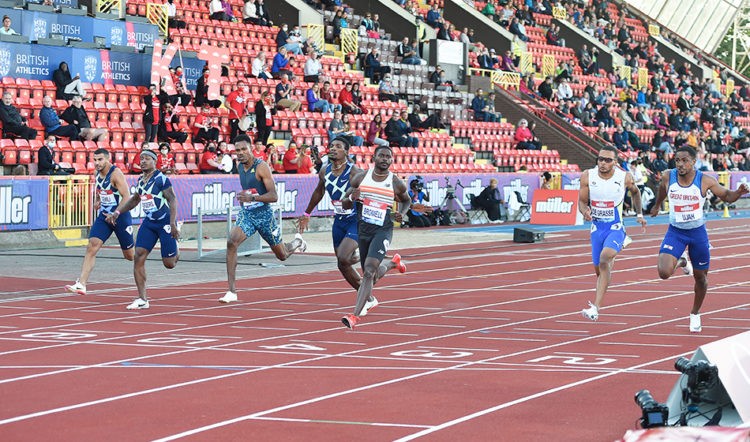 In second CJ Ujah continued his consistency with a 10.10 which deserved more as he finished ahead of European champion Zharnel Hughes, Olympic medallist Andre de Grasse and Tokyo US representative Fred Kerley, who all ran 10.13. Adam Gemili was eighth but his 10.21 was encouraging in that he was within a metre of all bar Bromell.

Reece Prescod easily won the men’s B 100m in a highly encouraging season’s best of 10.13/0.7 well clear of Josephus Lyles’ 10.29 and Netheneel Mitchell-Blake’s 10.31. Prescod said: “It was a relief to go out and run a season’s best. I’ve been struggling this year with finding my form and returning to the UK mid-season so my body has not felt quite there.

“To come out here and put together a great race and not panic gives me great confidence going in to Tokyo. Two weeks ago I was running 10.39 at the British Champs and now I’ve put down that time today so I’m really pleased with it.”

After the low of the European Under-23 Championships and a lack of practice among the British team and many of the UK runners not yet in peak shape there was some worry about the likely fortunes of the men’s 4x100m team but they won in a world leading 38.27.

There were some good change-overs between Ujah, Hughes and Richard Kilty and Nethaneel Mitchell-Blake had a clear lead at the start of the final leg. De Grasse finished incredibly strongly and only finished two hundredths of a second short of the British team with a 38.29 with Netherlands third in 38.49.

Everyone expected the men’s 110m hurdles race to further embarrass the Jamaican selectors but their trials winner and Commonwealth champion Ronald Levy was a clear winner in 13.22. Reigning Olympic champion Omar McLeod, who won’t be in Tokyo after a poor trials run, was level until the eight hurdles but messed up his last two hurdles and ran 13.42 and barely held off former world indoor champion Andy Pozzi (13.45). UK trials winner Tade Ojora, who was a finalist in the European Under-23 Championships a few days ago, was sixth in 13.87.

The 2017 world champion Johannes Vetter is one of the biggest favourites for Tokyo and he won but not as convincingly as you’d expect from a 96.29m world leader. He threw 82.13m in the first five rounds but a better 85.25m in the final round.

That last throw overhauled former Olympic champion who threw 82.81m earlier but a modest 76.14m final round which saw him finish behind Julian Weber, who threw 77.16m after an earlier 81.07m.

A far from from satisfied winner said: “It was a really difficult competition and I’m really disappointed as conditions were not good at all. The surface was really slippery and the conditions were really unprofessional.

“I was throwing the first five throws about six or seven metres before the line and the last one was all in which was the 85m. I’m back in Germany before Tokyo and I want to throw 90m again. The world record is possible in Tokyo. You can’t plan throws though and if it happens it happens.”

A rather moderate men’s high jump saw a win for 37-year-old Donald Thomas of Bahamas, 14 years after he won the world title. His 2.25m beat Marco Fassinotti on countback.

The men’s triple jump was a much better quality and saw a win for Portugal’s world leader Pedro Pichardo who jumped 17.29/-0.1 in the first round and then 17.50/1.0 in the all-important final round.

UK trials winner Ben Williams struggled to get it right and finished sixth with a 16.22/0.3 leap.

British trials winner Nicklas Baker again proved the best of the Brits winning the all-domestic 400m in 46.24 with Joseph Brier (46.34) who failed to make the Manchester final second and Lee Thompson third (46.46).

Martyn Rooney set a season’s best of 47.74 in seventh and defeated a totally out of sorts fellow European champion Matthew Hudson-Smith (48.29).

Rooney said: “It’s the last big race for me and I would have loved to have seen the crowd full like Wimbledon or Wembley but I’ve enjoyed it. Thanks for all the people who have pushed me along in my career, even if it has been negative and they have kept me honest and all the support has just driven me on.”