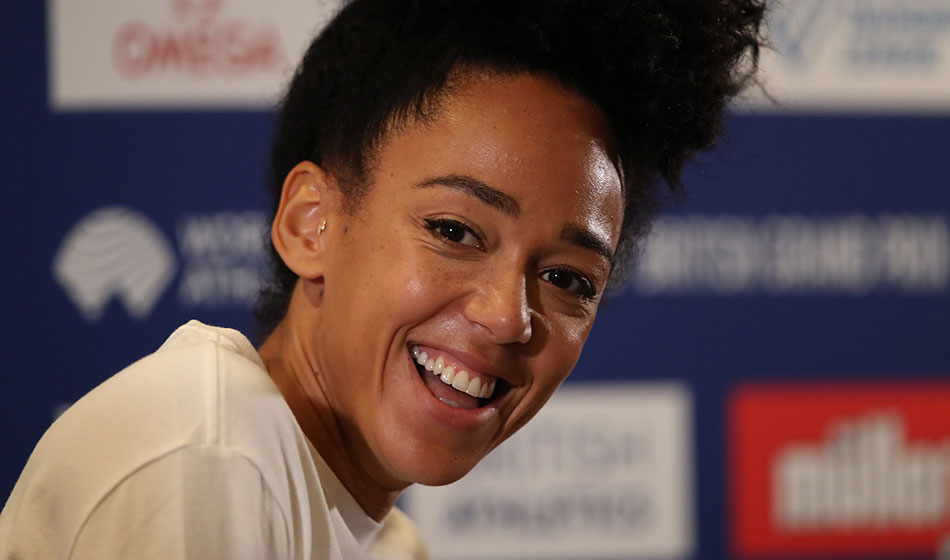 Katarina Johnson-Thompson has declared herself “100 per cent” fit to mount a medal challenge at the Tokyo Olympics, after seven months of battling her way back from serious injury.

The heptathlon world champion has revealed she ruptured the Achilles tendon on her jumping leg in December and doubts had surrounded her ability to compete in what would be her third Games.

The 28-year-old was named earlier this month in the British team bound for Japan, with her place reliant on being able to prove her fitness in time. It would appear she is on track, after returning to action with a high jump performance of 1.84m at a recent low-key meeting in France and she is now preparing to take part in the long jump competition at the Müller British Grand Prix in Gateshead on Tuesday (July 13).

She has one further competition scheduled between now and Tokyo and Johnson-Thompson insisted that a first Olympic medal remains the target.

“I’m back, I’m fully fit and ready to go,” said Johnson-Thompson, who will be up against a field including long jump world champion Malaika Mihambo in Gateshead.

“It’s been a long, tough road. It’s a big injury so I was devastated. I’ve been really trying to focus on the future and putting all of my positive attention into performing at the Olympic Games.

“It is my jumping leg but I high jumped on it last week, which is a very good sign, I’m long jumping off the same leg – I haven’t changed legs – and everything has healed. In fact, my left leg is now stronger than my right because of it.”

Asked if she can still be a medal contender this summer, she said: “That’s my aim. I wouldn’t have worked as hard as I have for the last seven months to get to the position I’m in. My goals haven’t changed, but circumstances beforehand have changed. I just know that I’m pushing every day to still achieve my targets.

“I’m in a good place and obviously missing competition practice but that’s why I’m here.

“I’m 100 per cent now. Everyone knows this is one of my first big competitions and it’s July but at the same time anything can happen in the heptathlon and in the coming weeks I’ll see where I’m at performance-wise.”

Johnson-Thompson cut a positive figure at the press conference for what will be the final Wanda Diamond League meeting before the Olympics takes place, highlighting the huge progress she has made mentally, as well as physically, since her sixth place finish in Rio.

“I feel like I can approach events now more rationally and can go in there knowing exactly what I need to do, instead of going in there and hoping for the best.”

Outside pressures are a particularly difficult thing to block out in the age of social media, with the recent online abuse directed towards England’s Euro 2020 finalists a stark reminder of the downsides to being a high-profile sportsperson.

“Social media is very difficult,” said Johnson-Thompson. “It does affect you in many different ways. I’ve not had online abuse directed at me but I’ve had negative comments which can affect my performance and my mentality going into different competitions.

“Everyone deals with it in different ways and I just know that every time I go out there I’m trying my best and that’s all I can do.”

Meanwhile, Olympic 110m hurdles champion Omar McLeod has admitted to being left “heartbroken” after not being selected to compete for Jamaica in Tokyo.

The 27-year-old, who is also performing in Gateshead, has been in fine form all year but the one race which didn’t go to plan was the Jamaican Olympic trials. Suffering with cramps and highlighting a competition schedule which left very little recovery time, he finished last and well outside of the top three place required to qualify.

McLeod, who said that his attempts at an appeal have proved fruitless, insisted he was in shape to run incredibly quickly. “When my name was not on the list I was pretty heartbroken,” he added. “I went into the championships as a world leader. I was competing well. I was going to treat the trials just the same. Every opportunity I had I gave a great performance. I was robbed of running really fast at the Jamaican trials.

“I thought I could run a ridiculous time, potentially a Jamaican record or world record. I had nothing else to prove. I was ready to go defend that title.”

One man who will be able to compete for Olympic honours, however, is Trayvon Bromell, who is currently the world leader for 100m after clocking 9.77 in June.

The American champion has established himself as the favourite for Olympic gold but will be looking to bounce back from coming fifth at the Monaco Diamond League meeting when he toes the start line in Gateshead alongside the likes of compatriots Fred Kerley and Ronnie Baker, Canadian Andre de Grasse, as well as the British trip of CJ Ujah, Adam Gemili and Zharnel Hughes.

Bromell, who has returned to the very top of the sport after battling with long-term injury, will only be racing for the second time in Europe since 2016 and will be using Tuesday’s outing to fine-tune his Olympic preparations.

“I want to stay humble and race and perform,” he said. “I’m going into Tokyo wanting to be the first person over the line and I’m not really worried about the time.”