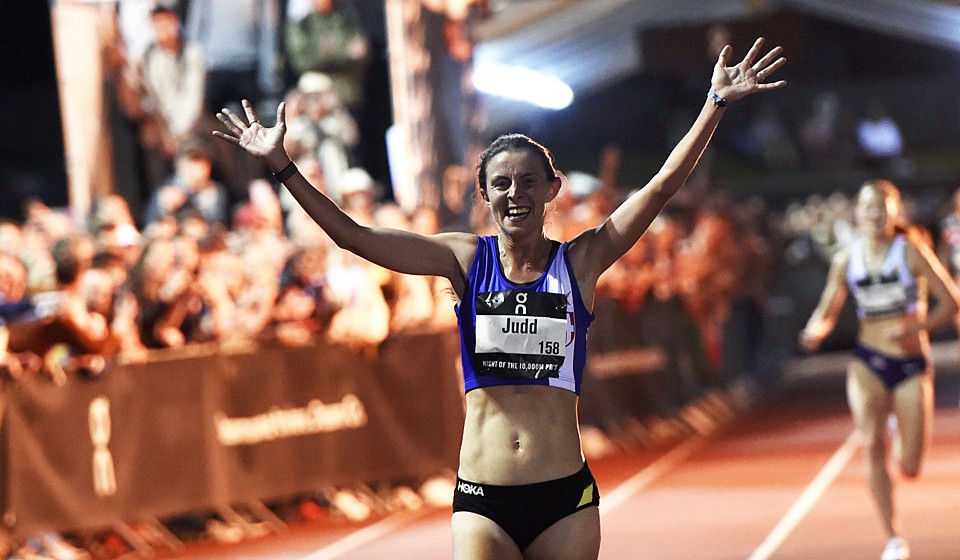 Night of the 10,000m PBs roars back into life as Briton lands Oregon spot, while Atkin overcomes sponsorship struggles to take title but misses qualifying mark

The phrase “if you build it, they will come” might have been written for the 1980s baseball film Field of Dreams but it also very much applies to the Night of the 10,000m PBs, which enjoyed a pulsating return to the athletics calendar on Saturday evening (May 14).

Due to the pandemic, this annual celebration of 25-lap racing has lain dormant since its last staging in 2019, but the volunteer-led monster created by event director Ben Pochee roared back into life at the Parliament Hill track in North London.

The sun shone, the crowds arrived in their droves and the athletes delivered on an occasion when the final two races – the British Championships contests – presented the chance to land places on the team for the World Championships in Oregon.

It might sound trite but it could be argued that the biggest winner of the whole event was the sport of athletics itself, although no one was wearing a bigger smile than the newly-crowned women’s British 10,000m champion Jess Judd.

With the necessary qualifying time already in the bag, the Tokyo Olympian had to make sure she was in the top two British finishers to guarantee her place on the plane for Eugene. However, just to rubber stamp it, Judd not only took overall victory but did so with a winning time of 31:22.24, inside the mark of 31:25.00.

Her victory was by no means straightforward, however – even after the pre-event withdrawal of the in-form 2021 British champion Eilish McColgan.

After European indoor 3000m champion Amy-Eloise Markovc had been prominent in the opening half of the race and led the field through 5000m in 15:44.91, Samantha Harrison decided to roll the dice and go all in just before the 6000m point was reached.

Running just the second 10,000m track race of her career, the Charnwood athlete who had been a long way back from the early five-strong leading pack before closing back in, shook the whole race up as she put her foot to the floor with a no guts, no glory approach.

The 27-year-old began to put daylight between herself and the chasing Judd and Markovc but 2000m later the effort really began to tell as Judd appeared on her shoulder. 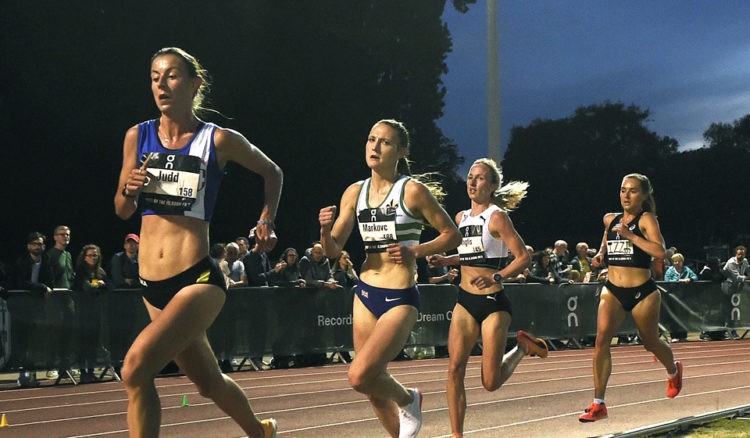 The outcome now seemed inevitable and it was certainly no surprise when the latter stormed ahead with two laps to go. Judd was able to savour the moment, while Markovc fell agonisingly short of her World qualifying target by clocking 31:25.57 after overhauling Harrison, whose brave efforts yielded a time of 31:30.63 which was well inside the Commonwealth Games England and European Championships qualifying standards.

Fourth-placed Sarah Inglis’ time of 31:39.60 also gave her a European qualifying mark, as well as a Commonwealth qualifier for Team Scotland.

For Judd, who will get married in September, a year which was already going to be big just got a whole lot bigger.

“I got really emotional coming down the home straight,” said the 2021 British 5000m champion, competing over 10,000m on the track for the first time since the Olympic final. “I’ve just never won a [10,000m] race. I’ve always been there or thereabouts but I’ve never won so to do that was amazing.”

“I got really emotional coming down that home straight. I never win and I’m always sort of therein or thereabouts.” @jessjuddxx speaks to @euancrumley after winning the elite women’s 10,000m at @NightOf10kPBs and qualifying for @WCHoregon22 🎙 pic.twitter.com/mWMoPJOZCC

Judd had made sure of that Olympic place when coming third last summer at a much lower-key British 10,000m Championships event in Birmingham. To be back in the Highgate hubbub meant everything.

“It’s what the sport needs,” she said of the event. “I’ve seen people on the way round that I started at the club with when I was 12, 13 and thought ‘this is unbelievable’. It’s the grassroots and we need to protect it.”

Now comes her preparation for the summer ahead, in which all three championships – World, Commonwealth and European – will be targeted.

“I’d like to do everything, as I get married in September,” she added. “I want the Judd name to go out on a high.” 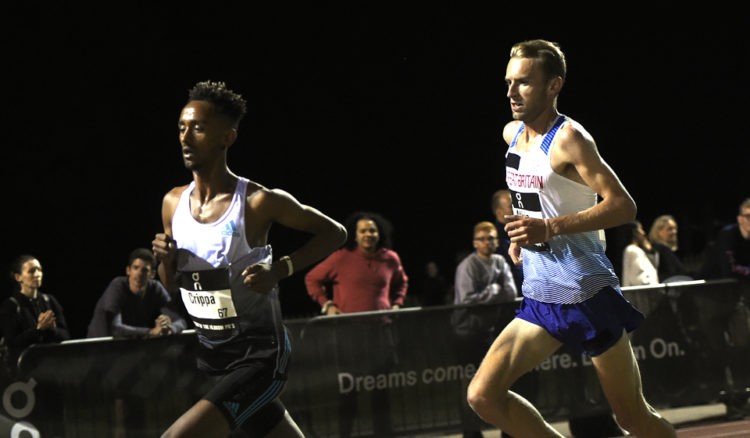 Overall victory in the men’s race went, once again, to Italy’s 2019 winner Yeman Crippa. The European bronze medallist placed himself at the head of affairs after the first lap and later simply stretched away from the opposition, leaving the outcome in little doubt as he won by over 15 seconds in 27:16.18, the second-fastest 10,000m of his career.

Behind him, the duel for British supremacy was won by Sam Atkin, who was second overall in 27:31.98 and followed by compatriot Emile Cairess in 27:34.08. Neither was able to register the Oregon qualifying standard of 27:28.00, however, while Ben Connor completed the British Championships podium with 27:51.82 in fifth.

It was a bittersweet evening for Atkin, whose PB of 27:26.58 took him to the Olympics last year but will now decide about his next steps after falling short of the World standard. The imminent confirmation that he is to become a sponsored athlete after what the US-based Brit admits has been a difficult time, however, has put him in a positive frame of mind.

“It was a good effort but I came a little short today.” @samatkin__ chats to @euancrumley after being the first British male in the men’s elite 10,000m at @NightOf10kPBs 🎙 pic.twitter.com/v94jpThlTe

“It’s been an absolute struggle,” admitted the man who has the World 5000m qualifying standard to his name. “I compete against all these guys that have sponsors, they don’t have to worry about getting paid to go travelling, getting a salary … if I didn’t have my parents, I wouldn’t still be in this today.

“I should be hoping for something even better now that I don’t have to worry about the little things and can concentrate on running instead of when my next meal is.” 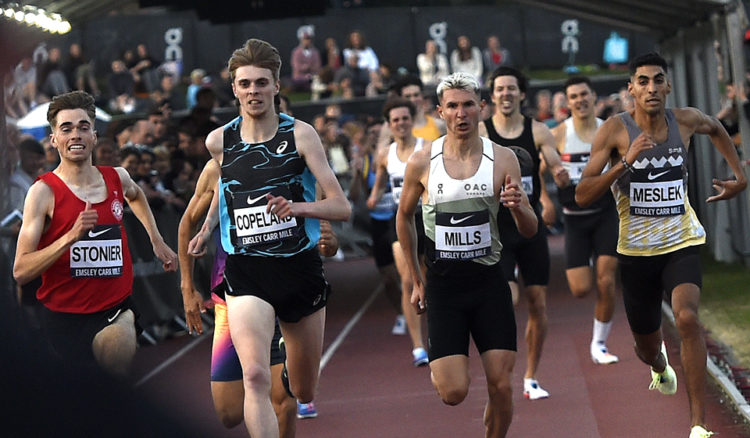 It wasn’t just the 25-lap action taking centre stage on the Highgate track, with the prestigious Emsley Carr and Millicent Fawcett mile races also included in the packed programme.

Both contests provided plenty of drama as the sun went down.

Prior to the event, Matt Stonier didn’t even possess a track mile PB but he took to the distance impressively to add his name to the illustrious list of Emsley Carr Mile winners.

His year had already included the 1500m BUCS title and third place in the men’s under-20 race at the English National Cross Country, but he just edged out British indoor 1500m champion Piers Copeland in a dramatic finish, with a world-class time of 3:54.89 to 3:54.91.

Irishman Andrew Coscoran was right behind in third with 3:55.31 followed closely by Ossama Meslek and George Mills. 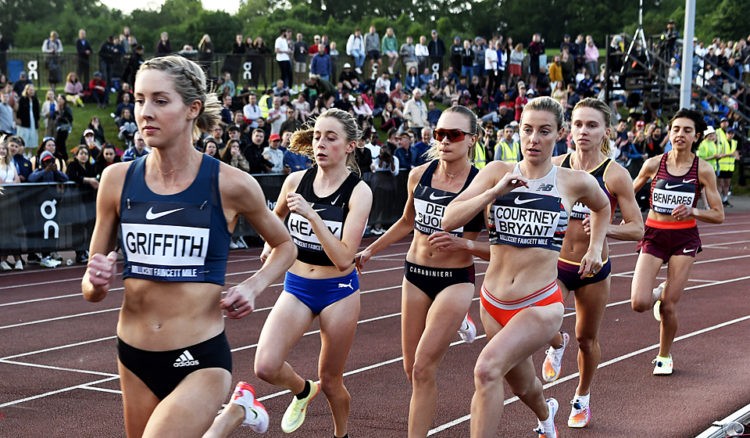