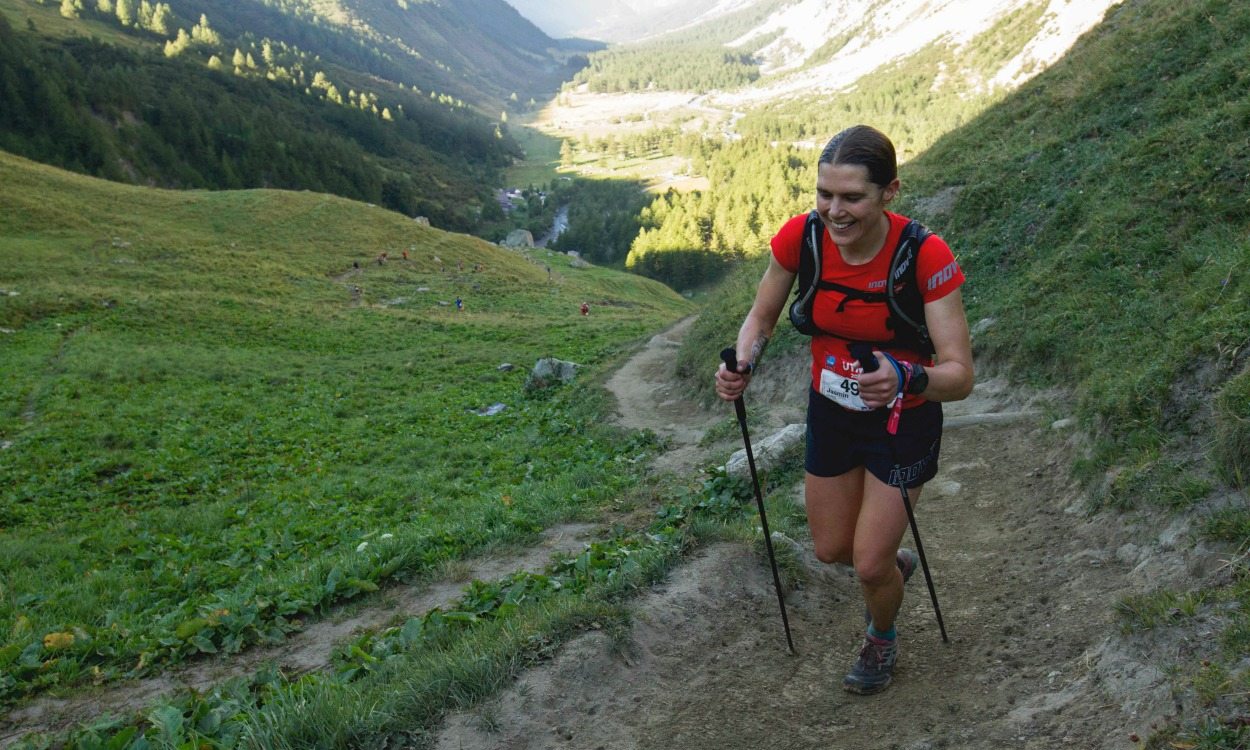 Jasmin Paris admits she’s a little tired. That comes as little surprise when you consider what she has managed to squeeze into this past year.

There have been ‘Sky’ races (the new and growing events which involve a cross between running and alpinism), Extreme Skyraces and also an impressive sixth-place finish at this year’s Ultra Trail Mont Blanc race.

But that has not been her crowning glory — not by a long shot. Closer to home, she has single-handedly been ripping up the record books for three of the most revered events in British mountain running.

To get round just one of these under 24 hours is an enormous achievement in itself. To complete three is pretty remarkable. To not only manage that but break the women’s record for two of the events and the overall record for the other truly is the stuff of running legend.

But that’s exactly what 33-year-old Paris did.

Back in April, she made her assault on the Bob Graham course. The women’s record of 18 hours and 6 minutes had been set the previous year by Nicky Spinks. Paris came home in an astounding 15:24. Her time is the sixth-fastest ever and is just 90 minutes outside the overall record held by another legendary fell runner, Billy Bland.

“The Bob Graham time surprised me and changed my outlook a bit. I definitely went into the Ramsay aiming to break the men’s record”

In June, she reached new heights, breaking the overall Ramsay Round record. Her time of 16 hours and 3 minutes destroyed the mark of 16:59 set by Jon Ascroft last year.

Having spent much of the summer racing in Europe, time and weather was against her being able to fit a Paddy Buckley attempt into the calendar year. Paris took her chance in October, though, and finished in a women’s record time of 18:33 (Spinks had held the previous best of 19:02).

“At the start of the year I’d worked out there was a good chance that, if I worked at it, I could get round all three but I didn’t think I was going to break the records,” says Paris. “The Bob Graham time surprised me and changed my outlook a bit. I definitely went into the Ramsay aiming to break the men’s record.”

The Paddy Buckley experience was very different. “By the end of the season I knew I was tired and I knew I only had a limited number of weekends where I could really go for it,” adds Paris. “The daylight hours were getting shorter so, as it was, I ran much more of the Paddy Buckley in the dark than I did for the Bob Graham and the Ramsay, which obviously makes things a bit harder.

“It was really wet and slippy on the Paddy, too, so you had everything working against you. The longer you leave it (in the year), the worse that’s going to get.

There’s many a runner out there who would like to ‘stumble’ that quickly. And Paris now has a very prominent place in some well-thumbed history books.

“The Bob Graham has this legendary status — and that’s part of the reason why I was surprised that I was able to run it that fast,” she says. “Doing it in 24 hours is such a big challenge. Then, to get that close to Billy Bland’s time — he’s talked about with such awe in fell running circles — an hour and a half really isn’t that far off so I was amazed to get that close to it.

“The person that held the Ramsay Round record before me is a really close friend — he came out and supported me and I supported him — so it was more of a team effort. Charlie Ramsay, who ran the original round, he did turn out and support as well. He comes to everybody’s Ramsay round, it’s wonderful.” 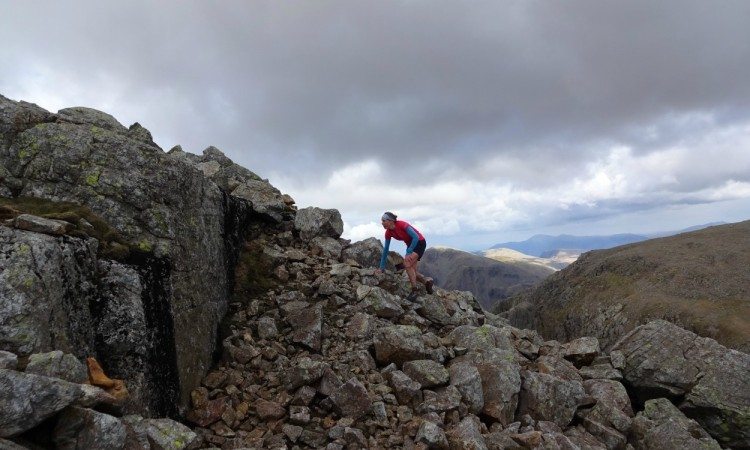 And it’s that support network, the inclusive nature of the sport, which keeps Paris coming back for more.

“For the Welsh record, for example, the people who paced me on the first leg were Chris Mear (a former record holder) and Tim Higginbottom (current overall record holder). They came out at four in the morning to support someone they’d never met before and who was trying to break their record. It’s just wonderful that people are keen to come and do that.

“That is exactly what fell running is like. On all three rounds, I’ve been supported by friends but I’ve also been put in contact with local people who know the route very well, so I’ve made lots of new friends and they’ve all made friends with my friends so it’s been this kind of mixing of people from Wales, Scotland and the Lake District. It’s built this network.”

Paris has spent much of her life among mountains. Experiencing wild places as she grew up was time particularly well spent — and hinted at a natural talent for endurance sport.

“My background is hillwalking – I didn’t really start running until I left university – but I found even when I was much younger that I was able to go for a long time and seemed to get much less tired than other people,” she says.

“I think that the running I do now is just an extension of the hillwalking I did. All the footwork and things – I’m sure I developed that when I was walking as a teenager and in my early twenties. I think the ability to move over rough ground — that comes through experience and having grown up with it. Not that you couldn’t learn it later on but you have to spend time on it.”

There are also aspects to fell running which are much, much harder to learn. The ability to ‘switch off your brain’ when tackling a steep descent is a key attribute, for example.

“I often think that descending is where people lose more time than climbing,” says Paris. “You might not be a good climber and you’ll lose, say, 10 metres on the person in front of you. But, downhill, you could easily lose a couple of hundred metres quickly.

“I love being outside and I love being in wild places and among mountains. It’s who I am, I guess”

There’s a very natural enthusiasm about Paris when she speaks about what she does. That’s because, at the core of it all, there is nothing she’d rather be doing.

“I love being outside and I love being in wild places and among mountains,” she says. “It’s who I am, I guess. The mountains put everything into perspective — not only do they look beautiful but all the things that worry you…it makes it seem insignificant.

“You do need a fundamental love of the landscapes. If you’re fit and well then you get a real buzz from it and occasionally you’ll get that moment where you feel like you could run forever.

“When I did the Bob Graham I was quite fit from the training I’d done through the winter but I’d also been to the mountains. I’d been to the Sierra Nevada a few weeks before but I also got food poisoning when I was coming back from that trip so I essentially had an enforced period of rest.

“I’m not usually very good at resting so I came into the Bob Graham fit and fresh. For the first two legs I felt fantastic. It was like that feeling you get when you’re a child sometimes, where you kind of want to race along. That’s how I felt. It doesn’t happen very often but sometimes you’ll feel great — and I think most runners will tell you they run to get that feeling.”

As for what’s next, Paris has her sights set on running the PTL — a multi-day endurance team event which covers 290km around Mont Blanc. There will be more Skyrunning, too, while an attempt on the Lakeland 24 hour record is also a strong possibility. However, she is also keen to listen to her heart.

“I’d like to go back and do some of the classic UK fell races again,” she says. “Sometimes I most enjoy a race where you just turn up in a field and someone shouts “go!” and at the end there’s someone giving out sandwiches and cups of tea. There’s no big fanfare, no big prize money — you get a bottle of wine. I’m quite happy to do that sort of thing.”

» This feature was first published in the November edition of Running Monthly magazine. You can read more about Jasmin Paris in the December issue where she features in a ‘best of British’ list including impressive ultra running achievements