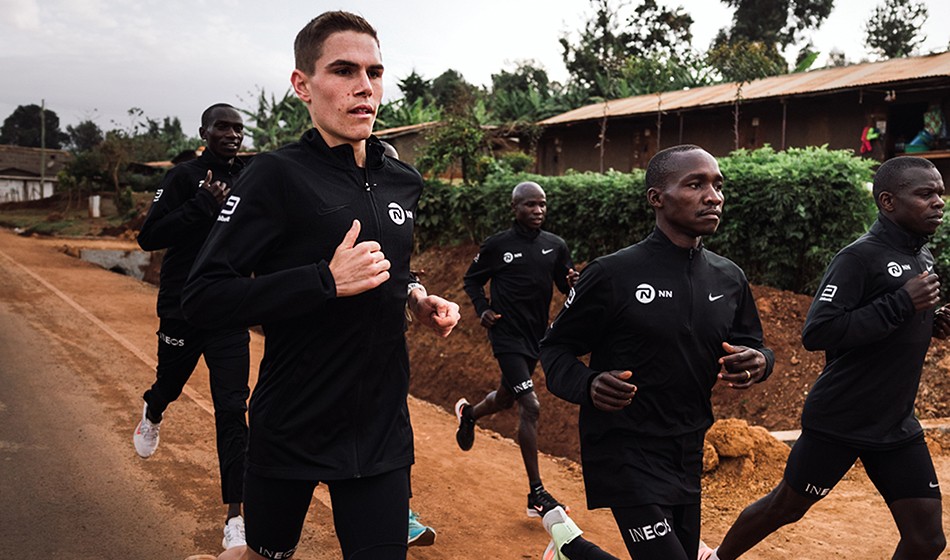 It’s a slightly comedic scene, but it’s delivered with a lot of endearment. Jake Smith’s manager, Jurrie van der Velden, has joined AW’s video interview with the 24-year-old British athlete – one of the most recent recruits to NN Running Team (NNRT) – and describes his role as that of a protective parent.

“Jake tells us off sometimes, like: ‘Hey, come on, I want to race’,” he laughs, “but we’re trying to look after him, not break him down. He’s not one of those you need to push to go for training. You need to hold him back, put him in a cage sometimes.”

Smith smiles in the background. He is not known for his restraint – at least not yet.

Following his 18th place – in a PB of 60:31 – at the 2020 World Athletics Half Marathon Championships in Poland, he admitted that he had wanted to see how much TV coverage he could get as part of the lead group.

His performance took him to third on the British all-time list and rightly gained plaudits, but he made an even greater name for himself when he ran 2:11:00 at the 2021 Chester Elite Marathon after pacing through halfway and opting to finish. It wasn’t planned, but it was classic Smith – fearless and fun. 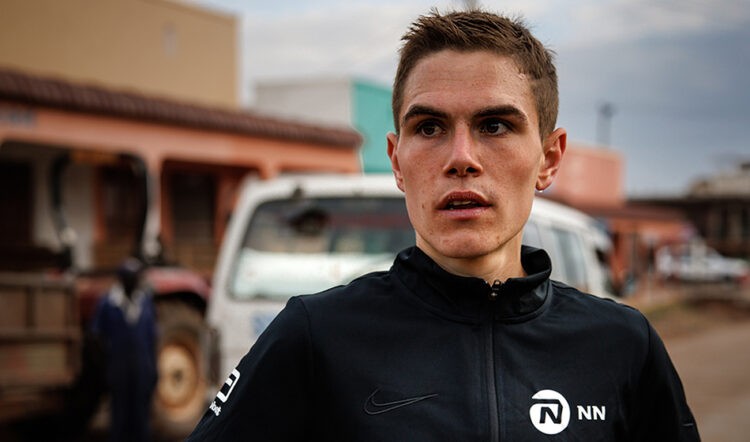 Van der Velden and NNRT were aware of his talent, but his impromptu marathon brought him back to their attention: “We thought, ‘Why would he run a marathon?’ Then we got the story and thought, ‘okay, let’s dig a little bit deeper, let’s try to understand who he is’.

“There were so many things, we thought if we can help him be a better athlete and understand the sport better – because he’s still so young and so new to it – we can add so much as long as it’s step-by-step and progressive. We can hopefully help him be one of the best European runners ever, and I truly think that’s possible, but of course he still has a long way to go, and he knows that. We’re pretty open and honest about that!”

Smith announced that he had joined NNRT – a project which also features the likes of distance greats Eliud Kipchoge, Kenenisa Bekele and Joshua Cheptegei –  in January 2022, and while he laughs at Van der Velden’s assessment, he knows it’s frighteningly accurate. He has a lot to learn.

“When I got the call saying, ‘We’ll take you out to Uganda to train with Cheptegei,’ it was incredible,” he says.

“It’s so different [out there]. In the UK you take everything for granted, whereas in Uganda it makes you really think. You have kids running with you barefoot on every run, similar to Kenya … there’s like 150 Ugandan runners, guys that have run 2:04 for marathons, just turning up.

“It was great fun, but it was very tough. It was very hilly. I was climbing 10,000ft at altitude over 100/110 miles per week and running constantly on trails. I loved the whole experience, but I pushed my body to the absolute limit out there and, I put my hands up, I did overtrain because it was my first time there.”

Smith’s training in Uganda – which included shorter sessions with increased recovery due to the altitude and challenging terrain, and significantly slower recovery runs compared to what he was used to – was overseen by Dutch coach Addy Ruiter, the endurance lead for NNRT.

True to his enthusiastic nature, however, the pupil did more work than he was given. Additionally, while the food provided to fuel his hard work was “amazing”, he found he couldn’t handle the iron-rich red meat and came close to suffering from anaemia.

“I think I lost 6-7kg in the space of four to five weeks,” Smith admits. “When I came back, I went through a bad couple of weeks… I remember doing a session the week before the half [Ghent Half Marathon, from which he eventually withdrew] and after the first lap I just called it, I just couldn’t do anything else. I knew there was something wrong with me, but I’ve bounced back really quickly.” 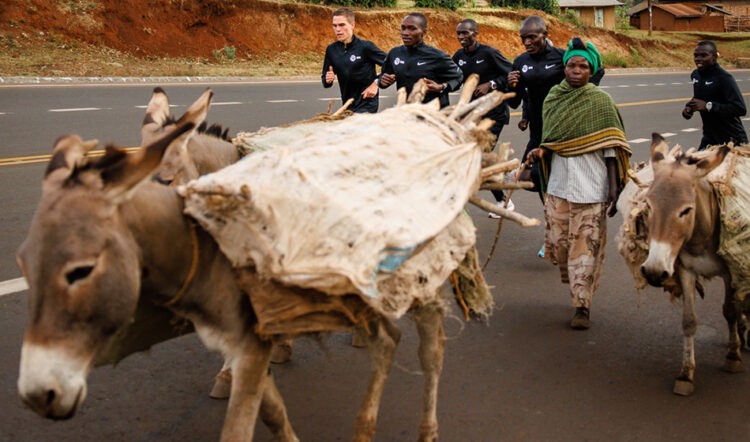 Born in Bermuda to British parents before moving to Hong Kong, Smith is used to adapting to change. His family relocated to England when he was 16 and he joined Exeter Harriers before moving to Cardiff, his current base, for university.

Having made significant progress through his university years under the guidance of coach James Thie, Smith returned from Uganda intent on exploring his potential over longer distances. He is now coached by Gavin Pavey, husband and coach to world, European and Commonwealth medallist Jo Pavey.

“In terms of mileage, it’s still very similar to what I was doing previously, but there’s a focus on speed right now,” he says. “Some of the sessions I’m given are horrible and I just want to do the marathon stuff at an easier, slower, pace, but I know it’s going to help me in the long run and mentally I’m just getting stronger and stronger.

“I’m a big fan of cross training, so at times during the week I take the run out and it just saves my legs. I know what works for me. Gavin is also implementing new things; I had a rest day two days before the British Champs [5000m], I’d never done that before and I felt incredible in the race, so it’s just little things that are really helping me and benefiting me.”

Coincidentally, Smith’s parents are based in Devon not too far from the Paveys, so when he’s in Exeter he has the opportunity to link up with them at his former club. “I had heard of Jo,” he says, “but it’s going to be hard to get one up on her when she’s been to five Olympics.”

He hopes that Paris 2024 will be his first. Good things come to those who wait, and restraint – once an unknown phenomenon to this charismatic young athlete – is becoming one of his strengths. 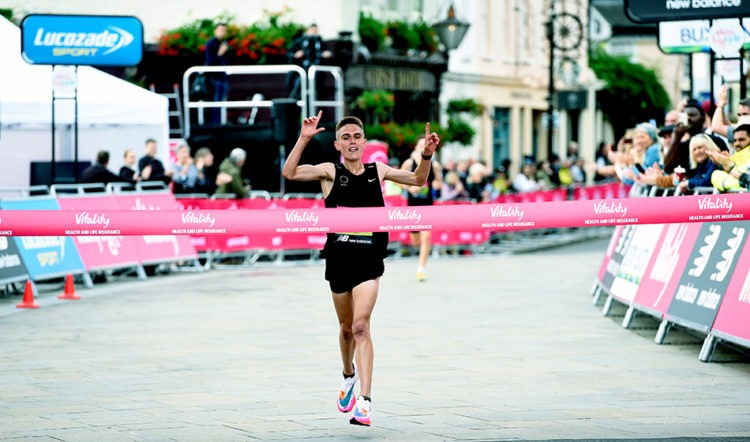 “I was offered the chance to run at the Worlds, Euros and Commonwealth Games this year for the marathon, but I turned them down because, at the end of the day, my ambition is to win a medal at 2024/2028 [at the Olympics] and I need to get quicker,” he says.

“That’s why I’m doing the 5/10km now. You look at the likes of [Eliud Kipchoge, world record-holder and fellow member of NNRT] and you see how fast they were when they were younger, so that’s why I’m trying to get my leg turnover now, I need that leg speed. It’s like little stepping stones working towards the marathon.”

Smith, who paced Olympic and world bronze medallist Bashir Abdi to the European record at the Rotterdam Marathon last year, was selected to be part of NNRT on the basis of his potential to become one of the best runners in Europe. He’s not there yet, but that was never the plan.

“We do that [team] selection carefully,” says Van der Velden. “It’s a small group and it should feel special. It’s early days [for Jake]. I think he’s already changed quite a lot, but it’s just waiting for results to come. We all know in athletics it’s an honest sport, so you need to put in a lot of work before something comes out so it’s mentally sometimes a little bit tough, but if Jake has patience… like 60:30 is really nice, but it won’t win him any medals, so there are still a lot of steps to take, and he knows that, we talk about it quite a lot. We try to keep him with both feet on the ground.

“He’s made a lot of progress over the last six months. You can’t really see it in the races he’s doing right now, but I think next year at this time if you did the same interview, it would be very different, also in terms of performances.”

For Smith, all eyes are now on the big picture. This isn’t Cheshire Elite Marathon. This time he’s pacing his own race – and he’s exactly where he needs to be.