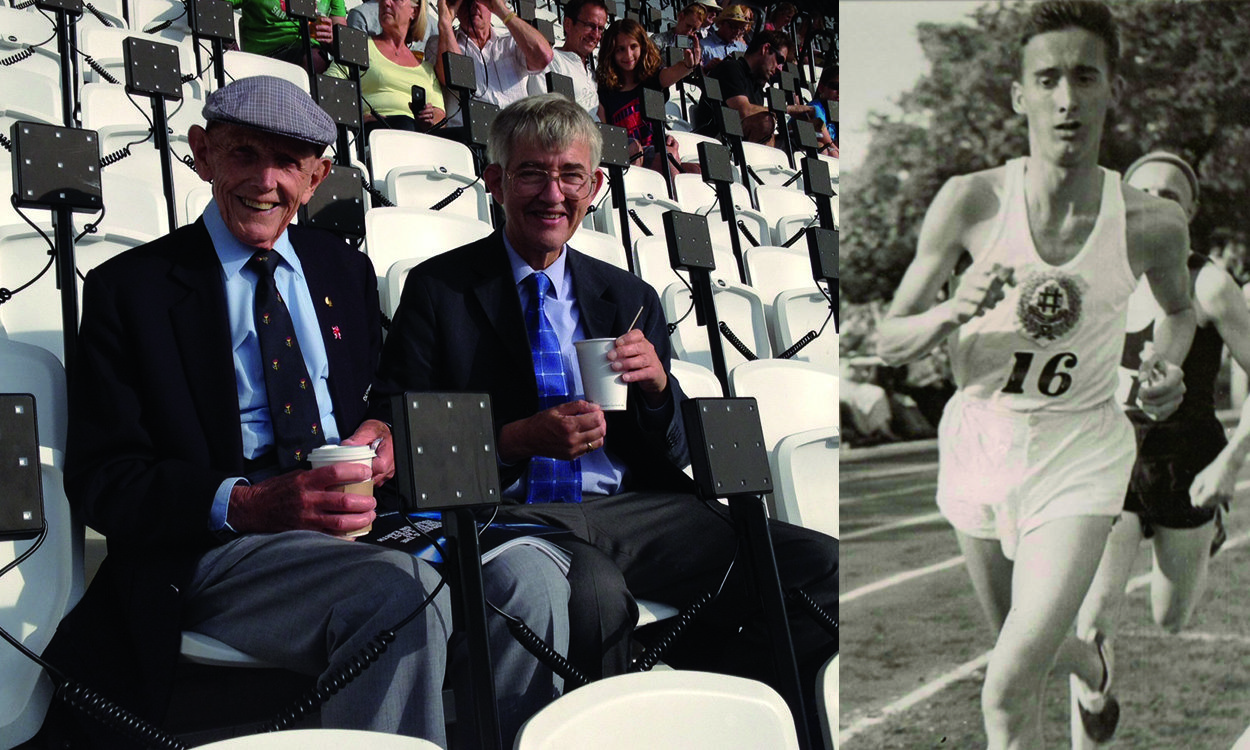 In a 2011 feature David Thurlow looked back on the career of Jack Braughton, whose death at the age of 95 was announced recently

The following article was first published in the July 21, 2011, edition of AW magazine.

On Saturday July 31, 1948, Jack Braughton took the morning off work and caught the No.12 bus from Peckham Rye to Wembley Stadium. The fare was 2½d and he lost half a day’s pay. He was off to the Olympic Games – to run for Great Britain in heat one of the 5000m.

Having finished eighth and failed to qualify, he changed and then caught the bus home for tea, a journey of over an hour. His participation in the Games was over.

How different it all is now, but for Braughton that one race was a wonderful moment in a very long career. For he had been chosen to run in the greatest sports event in the world, the first Olympics after World War II.

In 2011, aged 90 and still running and ballroom dancing four times a week, he looked back on it with pride.

Braughton started running at school, choosing running – and following his father – over a possible career with Grimsby Town FC. He joined Cleethorpes Harriers and then, when the club closed, Grimsby Harriers, for whom he won the Eastern Counties junior cross-country title in 1939.

He ran a bit during his Army service and of a time when he posted to India, he recalled: “I was a Warrant Officer and had a bearer called Jacob who looked after me. I hadn’t done any running for a while and one night I saw him coming back from a run and suggested that I went with him. He agreed and said if I went with him I would be safe.”

So began his trail to Wembley.

He said: “When I got back to the UK I started running again. That would be 1946/7, and I went down to the Tooting Bec track in south London to join Belgrave Harriers. I had run with some of them, people like Charlie Smart, who was a good distance runner.

“I thought they trained there, but it was like being in a foreign country. I met the very young Gordon Pirie and Blackheath Harriers members. The Blackheath captain was an ex-Olympic sprinter, Charles Wiard and, after they had asked me what I did, I joined them. That was Sydney Wooderson’s club and I ran against him. We had just moved into a flat at Peckham. So I went training at Hayes, where the club’s headquarters is, and at the Ladywell track at Catford in south London. In 1948 I had my best year.”

In 1947 British team manager Jack Crump had ranked him fifth best on merit in Britain for the year. He finished 28th in the 1948 National behind Wooderson, who won a thrilling race for his last major title before retirement.

“I was working as a building site manager in the private sector and my boss would not give me time off for the Games … So I stayed at home for most of the Games doing a normal day’s work. I took two days off unpaid”

Working as a building-site manager, he only trained twice a week, but it was bringing results because in the London-to-Brighton road relay he ran a brilliant last leg to bring his club in third, 16 seconds faster than his closest opponent. He went on to win the Surrey three miles, a title he held until Pirie took over in 1952, in a personal best of 14:49.4, but did not run in the Inter-Counties for his county.

Peckham, where he lived, was in Surrey in those days. He said: “I was never picked for Surrey. I asked their team manager, George Pallett, why not and he said they never knew whether I was fit! I told him he should read the results in Athletics magazine.”

At the AAA Championships’ 3 miles he ran 14:24.4, a lifetime best by 20 seconds, to finish fourth behind Dutchman Wim Slijkhuis, who would be the bronze medallist in the Olympic 5000m. In second and third places in the AAA event were Alec Olney, of Thames Valley Harriers, and Bill Lucas, of Belgrave.

Braughton said: “It was one of the few times that Bill Lucas ever beat me. I knew I had to finish in the first three home runners to get in the team because they had announced that. So I was very happy to come fourth and get the third place on the team.”

He had no coach, no mentor, just his own twice-a-week training, mixing fartlek with fast and slow bursts. His neighbours did not even know he was a runner, let alone an Olympian, until they saw him on television winning at the Surrey Championships.

He said: “I was working as a building site manager in the private sector and my boss would not give me time off for the Games. The team manager got in touch with him and was told that ‘if he wants to run, he runs in his own time not mine’. I asked him and he said the same. So I stayed at home for most of the Games doing a normal day’s work. I took two days off unpaid.

“That was the way it was then. I did not get any help with my training, I did not get any food parcels, nothing, but I was very proud to be selected. We were living in a flat and saving for a house. My son, Graham, had not been born then and we could not afford to lose my pay.”

He was not the only one in this predicament. Years later he met race-walker Harold Martineau, who was fifth in the Olympic 50km event and told him he had the same problem.

On picking up his kit and blazer to walk with the team at the opening ceremony, he ended up with the wrong tracksuit. The clothing was laid out for him on the bed in the athletes’ village that he never used, but someone had swapped the tracksuit and the one he had did not fit him.

He added: “I went there again to warm up for my heat and met Zatopek. Somebody nicked my watch. I never got that back and I suspected a very well built shot putter who had just come out of prison”.

When it came to the competition, Braughton and his two team-mates were disappointing and failed to qualify.

Braughton said: “I did not get much out of it. There was not much to cheer about. I was just not fit enough. End of story. I ran much slower than I did normally.

“Just one of those things. I had no coach, no one to fall back on. In those days it often went that way.

“The people in charge were always looking for university students and people with plenty of time to train. Some time later I had a letter from the AAA asking if I could take six months off and go to New Zealand to race. Of course I could not afford to take six months off. You had to be able to afford to it. It has all changed now. It has gone right the other way.”

“I did not allow athletics to interfere with my home life. That had priority”

After his heat Braughton caught the bus home and had tea with his wife, who had not gone to watch but asked if he had enjoyed it. His mother had refused an offer from her local newspaper in Grimsby to take her down to London. He did not return to either the stadium or the athletes village.

He said: “No one queried why you were not there. I could have been dead and buried as far as they were concerned. I just turned up and did what I had to do. It was just like any athletics meeting.”

He added: “It was not much of a thing in those days. There was no money in it. It was just a sport that people enjoyed.

“I did not allow athletics to interfere with my home life. That had priority. I never ran for Britain again. I did not have the time. I did not look to do it. I was just happy to get out and run, and that is what I did and I was always available to run for the club. Eventually, like everyone else, I had plenty of time to get out and run. Later I was able to make time but sadly not in 1948. But I enjoyed my life.”

Far from the Olympics being the end of his career, he ran 14:32.8 for 3 miles in 1949 and continued to win county titles. Probably his best achievement came in 1955 when, trained by Franz Stampfl, he caught the coach’s anger when he ran in the Poly marathon a week before the Southern 3 miles. In each he did a lifetime best, 2:36:44 for sixth on his 26-mile debut and 13:51.10 for the latter.

Braughton went on racing until he was 80 – “when I ran out of opponents,” he said. He won veteran titles and broke age records until then. He was a familiar figure all over the country, always wearing his bobble hat.

The book The Centenary History of the Blackheath Harriers described him: “This man was one of the most relaxed and graceful movers the club has ever had and a great asset on track, road and country. The outstanding distance runner of the club track team in this period (1948-1950s), he possessed the smooth inexorability of leg action that one associated with the superlative Finnish distance runners and performed with distinction over a variety of distances from the half mile to the marathon.

“Apart from some fine runs in the London to Brighton Relay, he was one of the only ones to attempt to challenge the overwhelming supremacy of Jim Peters and Stan Cox at the marathon. He was also one of the few runners directly following the war to see the necessity for British distance men to increase their training in order to match the performances of continental athletes like Zatopek. But there was always a hard-headed commonsense and realism about this northerner, which recognised a limit to what amateurs like himself could achieve in this coming age of full-time athletics”.

Braughton said: “I’m still pretty fit. I slip out and jog round the park at the rear of my house. One neighbour who had watched me said to another ‘he doesn’t seem to get any faster, does he?’ I enjoy running two or three miles. I race between lamp posts, jog between two, race between three. It keeps me fit.”

And so does his ballroom dancing four times a week.

He is also a director of the companies that look after the Blackheath Harriers club headquarters and the track at Bromley, and he helps with judging and anything else “whenever I am needed”.

The happy 90-year-old widower concluded: “If I die tomorrow I have had a good time. That’s what life is all about. Not to have won but taken part.”

» This article was first published in the July 21, 2011, edition of AW magazine and is an edited version of an article that appeared in Track Stats, the quarterly journal of the NUTS. An annual membership now costs £25 for UK residents and further information can be found here