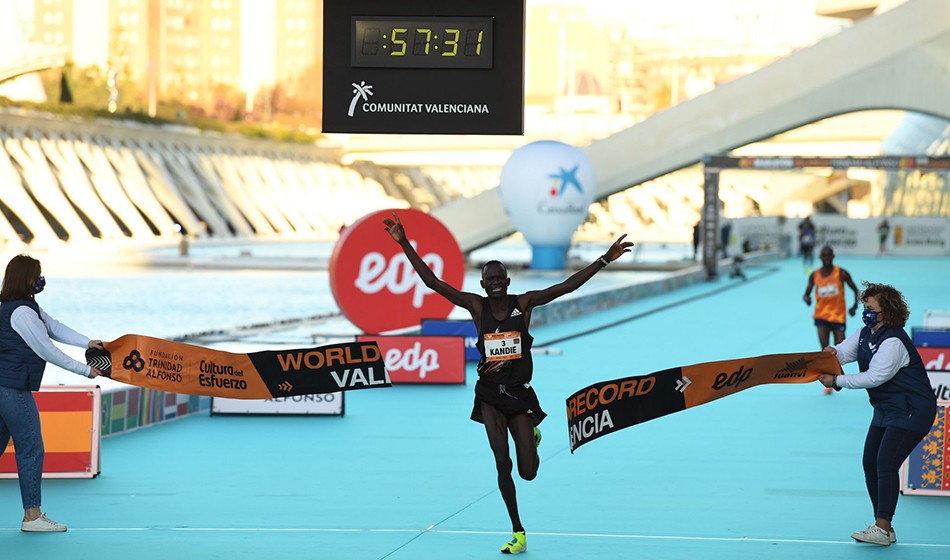 Organisers of the Valencia Marathon and Half Marathon predicted record-breaking performances. The streets of this Spanish city on Sunday, they promised, would produce the race of the year – and possibly the greatest race ever.

Certainly, in the men’s half-marathon they delivered as the 13.1-mile event lived up to the hype. Led by Kibiwott Kandie with a stunning 57:32, four men crashed under Geoffrey Kamworor’s world record of 58:01 as the world all-time rankings for the 13.1-mile distance were rewritten.

Surging hard in the closing stages, the Kenyan held off the challenge of Jacob Kiplimo as the Ugandan runner-up clocked 57:37 followed by Kenya’s Rhonex Kipruto in third on his debut in 57:49 and Alexander Mutiso fourth in 57:59.

Kiplimo had beaten Kandie to win the world half-marathon title in Gdynia in October and they renewed their rivalry here in Valencia with Kandie reversing the result.

Aged 24, the adidas-sponsored runner was in his element as he powered to victory under blue skies in the crisp early morning conditions in the self-styled ‘city of running’.

Valencia has turned into an epicentre of distance running competition. Only two months ago the same city had seen world records on the track from Joshua Cheptegei and Letesenbet Gidey.

The pace was fierce from the start with the leaders covering the opening 5km in 13:37 and 10km in 27:25. After passing 15km in 41:10, Kandie began to assert himself and pulled away from Kiplimo in the last kilometre.

The women’s half-marathon Trinidad Alfonso EDP was overshadowed by the world record in the men’s race but it still saw a great performance as Genzebe Dibaba clocked the fastest ever debut with 65:18.

The world 1500m record-holder (3:50.07) has never raced 10km in the past let alone 13.1 miles and this is her first race of any kind since August 2019. However the Ethiopian does of course have great distance running pedigree. The sister of Tirunesh Dibaba, she won the world cross-country under-20 title in Edinburgh back in 2008 and holds world indoor 3000m and 5000m records.

Behind Dibaba, Sheila Chepkirui of Kenya clocked 65:39, Senbere Teferi of Ethiopia 65:51 and Dorcus Tuitoek of Kenya 67:18 as Emily Sisson was only one second outside Molly Huddle’s American record with 67:26.

There were no world records in the marathon but Peres Jepchirchir clocked a women’s course record and world lead of 2:17:16 to go No.5 on the all-time rankings. The Kenyan is in fine form as she also took the world half-marathon title in October.

Now, the only women to have run faster at 26.2 miles are Brigid Kosgei, Paula Radcliffe, Mary Keitany and Ruth Chepngetich.

Runner-up behind Jepchirchir was fellow Kenyan Joyciline Jepkosgei with 2:18:40. In third, Helalia Johannes from Namibia ran a world W40 record of 2:19:52 as Ethiopians Zeineba Yimer, Tigist Girma and Degitu Azemiraw also sneaked inside the 2:20 barrier – the first time that as many as six women have broken 2:20 in the same race.

In the men’s marathon Evans Chebet went to No.6 on the world all-time rankings and top of the 2020 lists as he clocked 2:03:00 after out-kicking fellow Kenyan Lawrence Cherono.

Reigning Boston and Chicago winner Cherono led into the closing stages but appeared to stumble slightly as he turned the corner into the finishing straight. Sensing his opportunity, Chebet pounced and sprinted past Cherono, although the runner-up had the consolation of going No.7 on the world all-time rankings with 2:03:04.

Chebet later said his course knowledge helped, too, because he was runner-up in the Valencia Marathon in 2017.

With Birhanu Legese of Ethiopia not far behind in third in 2:03:16 and Kenyan Amos Kipruto fourth in 2:03:33 it means it is the first marathon in history where four men have broken the 2:04 barrier.

After starting well with a 65:14 first half, Britain’s Matt Clowes slowed in the latter stages to clock 2:15:46. Further British results included Norman Shreeve with 2:17:14 and Paul Martelletti with 2:19:56 but Scott Overall and Derek Hawkins did not finish – the latter having struggled with a tibialis anterior injury in recent weeks.