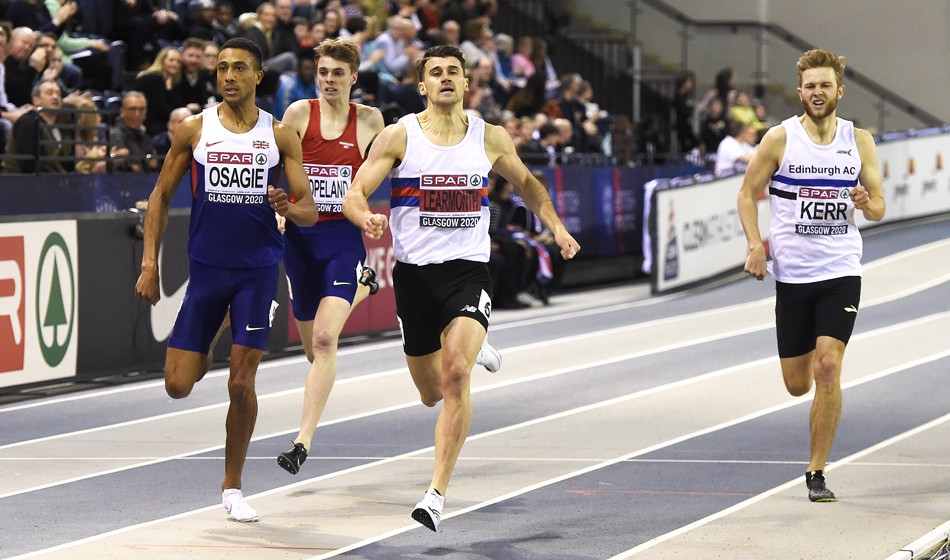 The Emirates Arena has not always been kind to Guy Learmonth but, after his painful exit from the European Indoor Championships this time last year, the Scot kept his cool and stayed on his feet to capture a third British indoor 800m title at the Glasgow venue.

The 27-year-old was left punching the track with frustration almost exactly 12 months ago following a fall which put him out at the semi-final stage of a championships for which he had been made British team captain. It looked as if a similar fate may befall him this time around, too, when Alex Botterill took a tumble in close proximity during the final lap, but instead the Lasswade athlete was able to avoid calamity and experience a moment to savour in front of a vocal home crowd.

READ MORE: Guy Learmonth ready to put on a show in Glasgow

Learmonth in fact clocked an indoor PB of 1:46.89 to hold off Andrew Osagie’s 1:46.98, with Piers Copeland also achieving a PB 1:47.21 in third. Long-time leader and world 1500m finalist Josh Kerr has never gone quicker over the distance indoors either, his run of 1:47.37 bringing with it fourth place.

“I really thought I was going to go down,” said Learmonth. “But I managed to stay on my feet and bring home the bacon so it’s a great feeling. Last year there was so much bad stuff that happened – running with a broken hand, broken ribs and then I had hip tendonitis as well so to come back and rectify all that…this title means more than any other medal I’ve won before and it bodes well for a great year.”

The other men’s middle distance event of the day, the 1500m, saw Brighton athlete George Mills come out on top and land his first senior British title in a time of 3:50.69, having fought off British junior record-holder Tom Keen (3:52.40) and Bolton’s Jonathan Kay (3:52.56).

The winning moment was all the sweeter for Mills, who has had to work his way back from a catalogue of injuries.

“I had a stress fracture in my shin, sacrum and then I tore my hamstring all within the space of a year, which meant I missed 2017 and 2018,” said the former 800m European youth champion. “To be national champion and win my first senior British title is something else. I’m absolutely delighted with it.”

There was also a maiden British indoor title for James Williams, who ran a personal best of 47.24 in what was a very convincing performance over 400m to take victory ahead of Swansea’s Joe Brier in second (47.92), while Krishawn Aiken of Shaftesbury Barnet clocked (48.00) for bronze.

In the 200m, Kingston-Upon-Hull athlete and BUCS champion Andrew Morgan-Harrison ran 21.20 to hold off Nicholas Pryce and Ben Snaith, who clocked PBs of  21.29 and 21.47 for second and third respectively.

Bosworth breaks his own British record

There was never any doubt as to which athlete would win the 5000m men’s race walk title. Instead, the real question at hand was whether or not Tom Bosworth would manage to achieve it in record-breaking style.

To do so he had to beat his own national mark of 18:28.70 and, in the absence of the likes of Callum Wilkinson, he was faced with what was essentially a one-man time trial. The Commonwealth 20km silver medallist set off like he meant business and always looked in complete control as he sliced a huge chunk off his target time, clocking 18:20.97 to send out a strong message to his Olympic rivals. Manx athlete Tom Partington was second in 22:17.16, with Bexley’s Luc Legon clocking 23:00.52 for bronze. 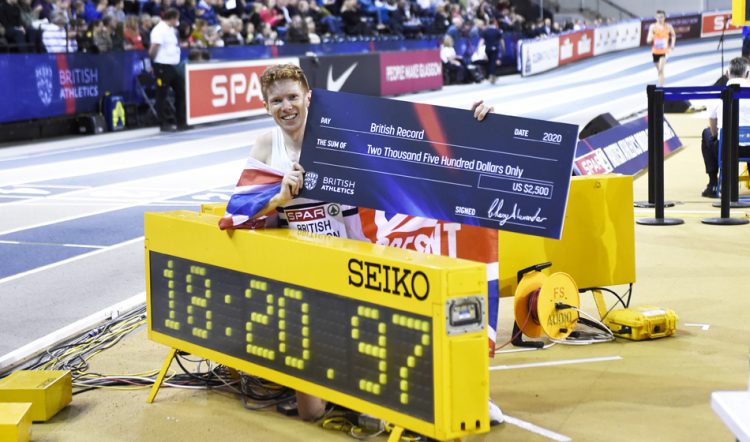 “I love this track, it’s brilliant. It’s a fast track and I set a world record last time I was here,” said Bosworth, referring to the 3000m mark he set in 2018. “I had a perfect winter in terms of preparation and, to be honest, I haven’t felt this good since the Commonwealths.

Tom Gale jumps to it once again

In the field events, Tom Gale completed what has been a memorable indoor season with high jump gold. The 21-year-old is the current world leader and has already achieved the Olympic qualifying standard thanks to his recent leap of 2.33m. While he didn’t quite hit those heights this time around, there was plenty of satisfaction at getting the job done with a leap of 2.27m.

Gale has been marked out as one to watch for some time now and continued to underline his potential, securing victory convincingly with that first-time clearance.

His three attempts at 2.32m proved narrowly unsuccessful, but he said: “In previous years I’ve won because the best guys weren’t there and today they were and I won so I can be happy. I put myself in the best position looking to the outdoor season. Having the Olympic qualifier behind me is a big thing so outdoors, let’s go have some fun.”

A week on from being involved in the same pole vault competition that saw Mondo Duplantis break the world record, Adam Hague enjoyed his own moment in the Emirates Arena spotlight as he won British indoor gold.

A clearance of 5.55m won the competition ahead of Shaftesbury Barnet’s Ethan Walsh (5.15m), while Kilbarchan’s Andrew Murphy won bronze with a PB of 5.00m.

Hague went on to unsuccessfully attempt what would have been a personal best of 5.67m but was more than happy with his day’s work.

“It feels nice to get that winning feeling back,” he said. “I was really pleased with the height that I achieved in the end, so overall it was a pretty good performance. I’m happy, the crowd was great and it’s been a good day.”

It was also a good day for Michael Puplampu, who successfully defended his triple jump title. The Newham and Essex Beagle athlete had to rely on a final round leap of 16.21m to land gold, however, ahead of Harrow man Efe Uwaifo’s PB (16.18m) and Sale’s Julian Reid (16.08m).

“I left it a little late today, and I keep on doing it to myself,” said Puplampu. “I did the same thing last year and left it to the last round and got it by a centimetre. There’s so many people back home supporting me that I knew I had to get the job done.”