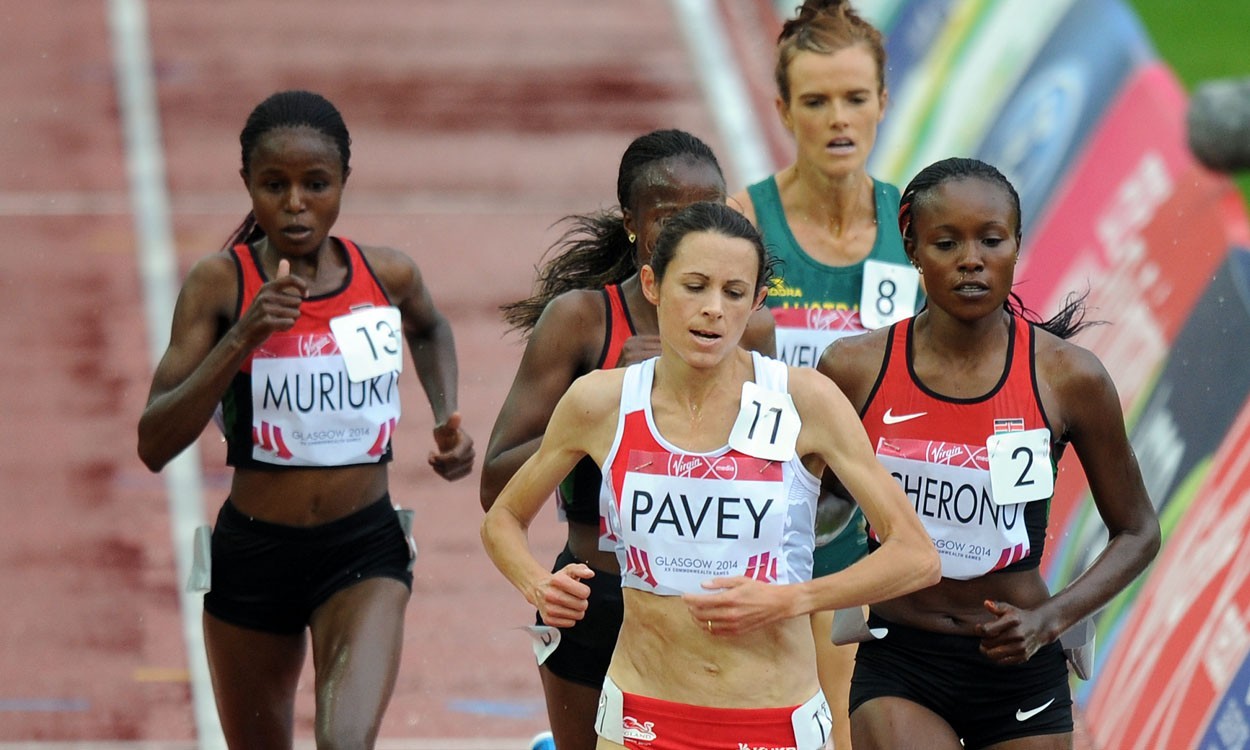 Supermum strikes again. Jo Pavey, the 40-year-old mother-of-two, had no intention of making up the numbers in the 5000m final on the last night of the Commonwealth Games. Racing against athletes half her age and from the supposedly invincible distance-running nation of Kenya, the popular Exeter Harrier battled her way to an incredible bronze medal.

“It feels surreal, almost comical,” she said. “I’m 40 now and have two kids and my youngest is only 10 months, so to be out there and trying to race against the Kenyans and getting a medal seems it’s like I’m dreaming, really.”

Determined to give the East Africans a run for their money, Pavey hit the front with three laps to go – much to the delight of the crowd. Using every ounce of determination and experience, she pushed the pace with a long run for home but looked beaten when three Kenyans plus Eloise Wellings of Australia swept past her with 600m to go.

Something remarkable then happened. Displaying incredible grit, Pavey moved out, stubbornly passing the quartet of rivals, to lead again at the bell. The excitement not over, Pavey stretched out down the back straight, was overtaken again by the Kenyans with 200m to go, but roared on by the 44,000 crowd she attacked in the home straight, charging past Margaret Muriuki and almost beating Janet Kisa on the line as Mercy Cherono took gold in 15:07.21.

“You’ve got to think the Kenyans are not unbeatable,” said Pavey. “I just wanted to give it my all. As I hit the last lap I thought ‘I don’t want to regret this’. I tried to push on at the bell but make sure I wouldn’t blow up in the home straight and so I was trying to gauge it right. When I got to the last 100m I gave it everything and thought ‘oh no, they’re going come past me’ so I kept focused. I can’t believe I got a medal.”

She added: “I was trying to push the pace because I knew if I did nothing until the last lap then I might regret it. I wanted to give myself the best chance and didn’t want to be walking off the track thinking ‘what did I expect? I didn’t do anything’. So I just gave it a go.”

It was one of the moments of the Games. Indeed, Pavey has been one of the athletes of the year.

After giving birth to her second child, Emily, 10 months ago, the Devon athlete was still breast feeding in April. Yet in May she won the UK 10,000m title in London in windy conditions in 32:11.04 and in June she clocked a world masters 5000m record of 15:04.87 in Rome before narrowly losing out to Emelia Gorecka, who at 20 is half her age, in a memorable duel at the British Championships in Birmingham.

On Saturday in Hampden Park, though, she left Gorecka half a minute behind and virtually lapped an albeit underpar Steph Twell. It not surprisingly led to an avalanche of admiring comments and messages on social media.

Consider this – the Exeter Harriers vest Pavey wore this season is older than some of her rivals. She set a UK under-15 1500m record three years before Glasgow gold medallist Cherono was even born and when she competed in her first senior championships – the 1997 Worlds in Athens – the runner-up on Saturday, Kisa, was only four years old.

That’s the same age as her youngest fan in the Hampden Park stadium on Saturday. Her son, Jacob, was there with her husband Gavin, parents and father-in-law, while her mother-in-law stayed at home in the West Country to look after Emily. Mother first, athlete second, Pavey explained: “I was worried she’d be terrified because she’s so little.”

Amazingly, she is not finished either. Not by any stretch.

In just over a week’s time she tackles the 5000m and 10,000m at the European Championships in Zurich. After that, she has unfinished business at the marathon, being keen to improve her 2:28:24 PB and make Team GB for Rio 2016, probably at 26.2 miles.

She was already one of the country’s most popular athletes before Glasgow 2014. Now, after her Commonwealth 5000m heroics, she has won even more fans who will be cheering her every step of the way to Zurich, maybe Rio, and possibly even beyond as her remarkable career shows no sign of hitting the wall.