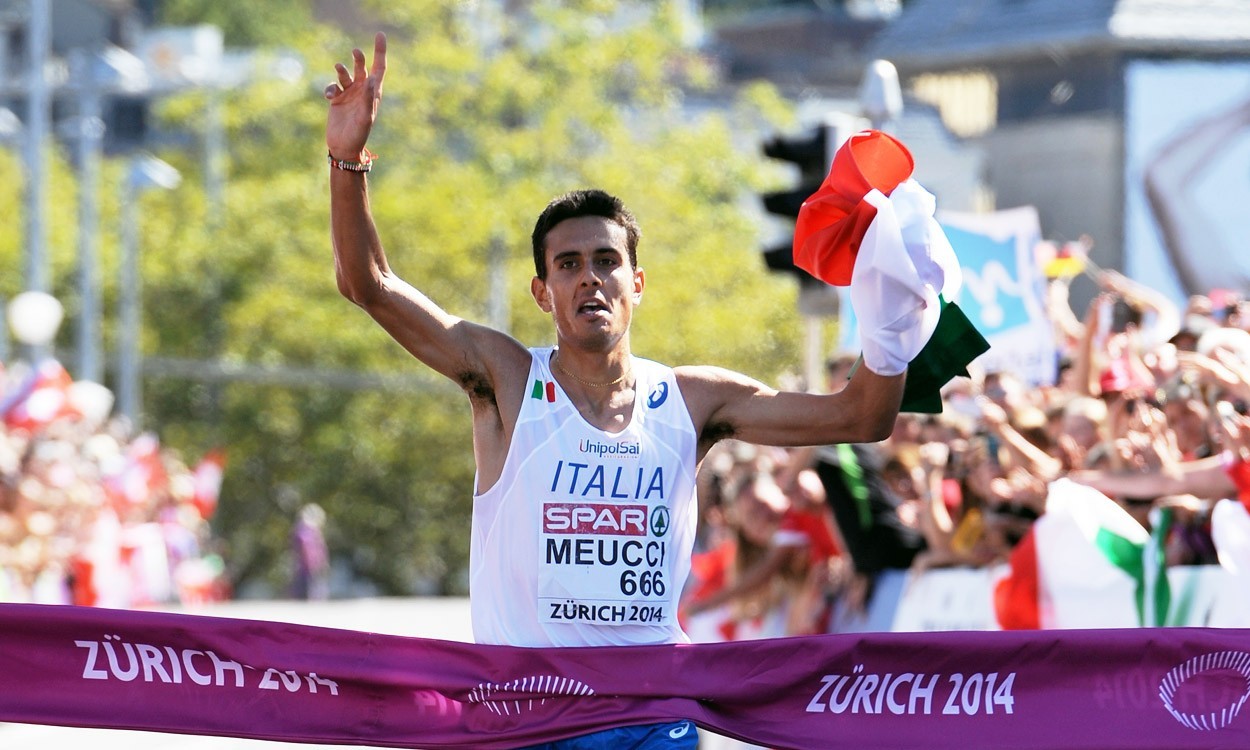 Having won European 10,000m bronze in 2010 and silver again on the track two years later, Italy’s Daniele Meucci graduated to gold in Zurich with victory in the marathon on Sunday morning.

Competing in front of strong crowd support with rows of fans lining the streets of the Swiss city, the 28-year-old judged his race well to clock a 2:11:08 personal best and finish 52 seconds clear of Poland’s Yared Shegumo, as Aleksey Reunkov of Russia bagged the bronze in 2:12:15.

Such was Meucci’s consistency, he passed half way in 65:34 and then recorded exactly the same split for the final 13.1 miles.

The marathon course, which had received the input from Switzerland’s defending champion Viktor Röthlin who got the gold in 2010 with the 2012 event not featuring the 26.2 mile event, included some challenging hill work and Röthlin himself came through for fifth in 2:13:07. The 39-year-old will come away with a medal from what he says will be his final major marathon, though, as he led the Swiss team to marathon cup bronze, with Russia getting team gold and France team silver. Ahead of Röthlin, Spain’s Javier Guerra clocked 2:12:32.

Having featured in a large lead pack early on, it was Poland’s Marcin Chabowski who decided he wanted to take the race on and the 28-year-old, who won European junior steeplechase gold back in 2005, began to break away. By the 10km mark he led by seven seconds with 31:11 to Abdelhadi El Hachimi of Belgium’s 31:18. Röthlin and his Swiss team mate Tadesse Abraham were also among 10 athletes through in 31:19.

Chabowski continued to increase his lead, passing half way in 64:45 for a 48 second advantage. But as the 30km mark was met, the Polish athlete was clearly starting to feel the strain and Meucci began to close the gap. Compared to the grimace on the face of Chabowski, Meucci looked strong and at 35km the Italian was eight seconds ahead.

The final steep incline proved too much for Chabowski as he came to a halt and stepped to the side as his team mate Shegumo strode past. Reunkov had saved enough for that hill and made the most of his strength to make up a considerable amount of ground, setting him up well to take the final place on the podium.

“It was a difficult course and I was very tired on the last lap, but I always believed in myself,” said Meucci, competing in only his third marathon and claiming his first victory over the distance.

He joins Stefano Baldini and Gelindo Bordin in claiming the European marathon title for Italy, the pair each having won the event twice, the first of their two victories coming before they each went on to claim the Olympic title too.

“I never looked at the time, at the pace. I only looked at my competitors and at my own sensations,” explained Meucci, who had finished sixth in a Euro 10,000m won by GB’s Mo Farah on Wednesday night.

“At 35km I saw my coach Massimo Magnani and he told me I looked ok and should go. This gave me a lot of confidence and then I knew I could win this race.

“I ran the 10km here to unblock myself, never thinking about a medal.”

In winning silver, Shegumo claimed the first medal of any colour for Poland in the marathon at this event and the 31-year-old, who has also competed for Ethiopia, was pleased to get his first medal for the European nation.

“The uphill sections were tough but they were the key moments in helping me to get the silver medal,” he said. “It’s priceless to me, it’s like the gold medal to me.”

» Full results can be found here, while the August 21 issue of Athletics Weekly will feature more in-depth coverage