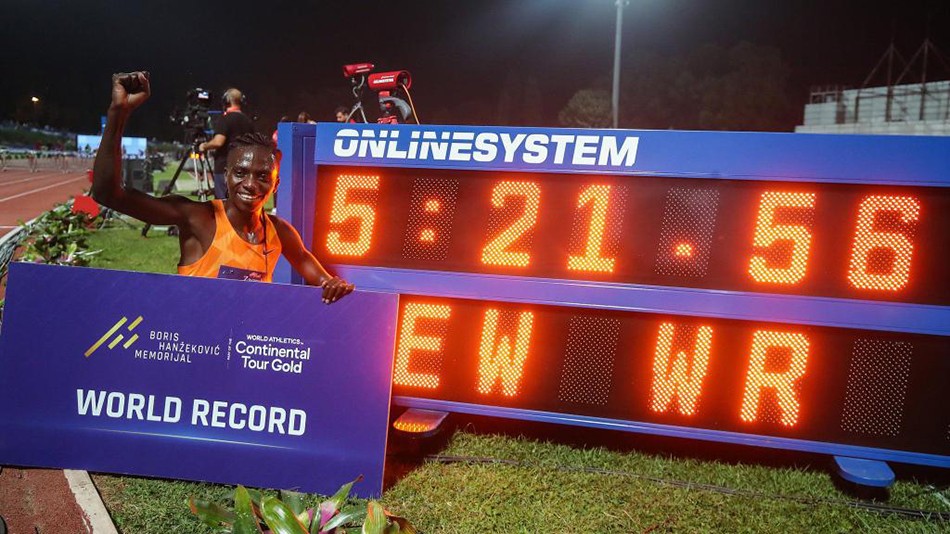 After narrowly missing the world best for two miles at the Pre Classic last month and then winning further Diamond League races in Brussels and Zurich, Francine Niyonsaba broke the world record for 2000m at the Boris Hanzekovic Memorial in Zagreb on Tuesday (Sept 14) with 5:21.56.

The previous best of 5:23.75 had stood to Genzebe Dibaba of Ethiopia set indoors in Sabadell, Spain, in 2017, whereas the fastest outdoor mark was Sonia O’Sullivan’s 5:25.36 from Edinburgh in 1994.

But Niyonsaba took the record for the rarely run distance into new territory as she surged away from Ethiopian Freweyni Hailu in the closing stages in this Continental Tour Gold event.

It means she has become the first athlete with ‘differences of sexual development’ (DSD) to break a world record.

As a female athlete with naturally high testosterone levels, Niyonsaba has been forced to switch from her favoured 800m distance to run in events further than one mile. But she is now running just as well, or better, at those longer distances.

“I am feeling seriously wonderful. I didn’t realise I could run a world record, but it was my first time here. I came here to do what I have to do,” she said.

“I did it. It’s wonderful and it’s fabulous. The pacing was really perfect. I want to thank all the people who came to cheer us.”

Another athlete with DSD, Christine Mboma of Namibia, beat Allyson Felix’s meeting record with 22.04 in the women’s 200m as she stormed past Shericka Jackson of Jamaica in the closing stages. Mboma, 18, was a 400m specialist but had to drop down to 200m where World Athletics thought her natural attributes would not give her as much of an advantage.

Elsewhere Devon Allen of the United States won the 110m hurdles in 12.99 (0.7) ahead of Donald Levy and Olympic champion Hansle Parchment. Another American, Marvin Bracy, missed Usain Bolt’s meeting record by one hundredth of a second as he clocked 9.86 (0.8) in the 100m.

Catalin Tecuceanu of Romania did not make the Olympic Games but he has enjoyed some great late-season form and here he beat Brits Daniel Rowden and Elliot Giles to win the 800m in a national record of 1:44.93.