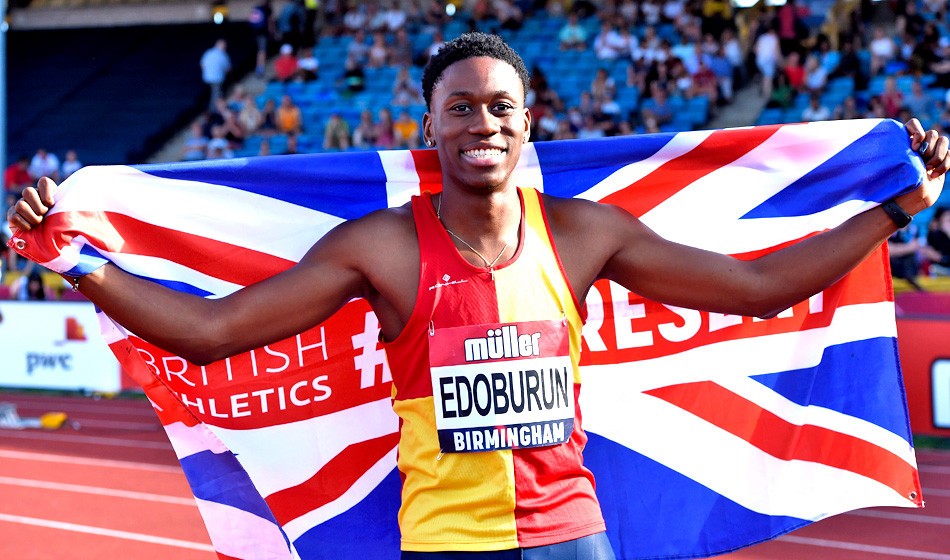 The men’s 100m on day one of the Müller British Athletics Championships was so close to call that the winner, Ojie Edoburun, did not know he had won for a few moments after the race. The 23-year-old was given exactly the same time of 10.18 (-1.9m/sec) as Adam Gemili and Zharnel Hughes but after a short, tense delay he was given the verdict over his more favoured rivals.

Hughes is the fastest British sprinter this year with 9.95, while Gemili has run 10.04 but Edoburun, whose season’s best is 10.08, turned the form book on its head to win gold.

“I was getting ready to say ‘well done, Adam’. But it came up as me being the winner and it was such an emotional moment,” said Edoburun.

Ojie Edoburun talks to AW about the tough transition from junior to senior athletics and conquering his mental demons after winning the British 100m title in Birmingham. #MullerBritishChamps pic.twitter.com/VS4CPmKrnU

A brilliant junior talent, Edoburun won the European under-20 100m title in 2015 and under-23 title in 2017 but has struggled to make an impact in the senior ranks. However, he says a change of coach to Steve Fudge together with an emphasis on sports psychology to iron out demons and improve his pre-race confidence have helped him move on to a new level.

“People often think seeing a sports psychologist is a sign of weakness but I think it shows you are doing something to become stronger,” he explained.

On the evidence of Saturday’s 100m at Alexander Stadium, he has a point and will now go to the IAAF World Championships in Doha along with fellow automatic qualifier Gemili aiming to at least make the final.

Harry Coppell led some fine performances in the field with an IAAF World Championships qualifier of 5.71m in the pole vault which lifts him to equal fourth on the UK all-time rankings. Read more and view a video interview here.

Tim Duckworth won the British long jump title last year by one centimetre from Dan Bramble and this year the duo enjoyed another titanic battle with an even closer result.

Both men jumped 7.92m but Duckworth also had a 7.91m to his name and took gold on countback as Bramble took silver and Feron Sayers took bronze.

“I went 8.00m last year and Dan went 7.99m so I think he’s starting not to like me,” joked Duckworth, who is poised to compete in the decathlon at the IAAF World Championships in Doha.

Tim Duckworth beat Dan Bramble by 1cm to win the 2018 British long jump title and the battle for the 2019 crown was even closer with both men jumping 7.92m. #MullerBritishChamps pic.twitter.com/TBU9b4tMnw

Javelin thrower Harry Hughes finished his rollercoaster, injury-hit season on a high note with a 75.11m victory. The 21-year-old opened his season with 80.32m – the first 80-metre throw by a British athlete for seven years – but he then injured his left heel at the England Championships in June, causing him to miss the European Under-23 Championships.

After six weeks on the sidelines, he was unable to compete in July but kept himself in good shape and returned in Birmingham on Saturday to win the national title by five metres from Joe Dunderdale in tricky, blustery conditions for the throwers.

“I’ve only done British champ once before,” said Hughes. “And that was two years ago when I was injured. I threw 66 metres and came sixth and didn’t want to be there at the time as I wasn’t in the right mindset.

“So it feels great to be here and to be in really good shape and to be confident and to finish the season on a high.”

“I came into this ranked fourth which is pretty unheard of for myself coming into the British Champs,” said Smith. “I’ve turned my season around slightly to having a season’s best of 2.19m coming into this and coming away with 2.25m and coming first so I’m really happy about that.”

Another in-form Scottish athlete in Birmingham, Andrew Butchart, was always in control in the 5000m and he surged clear with a kilometre to go to clock 13:54.27 to win from Marc Scott. After a recent spell of training at altitude in Font Romeu, Butchart looks in great form and now races in Zurich on Thursday before beginning his final countdown to Doha.

Reports from the women’s events in Birmingham are here.