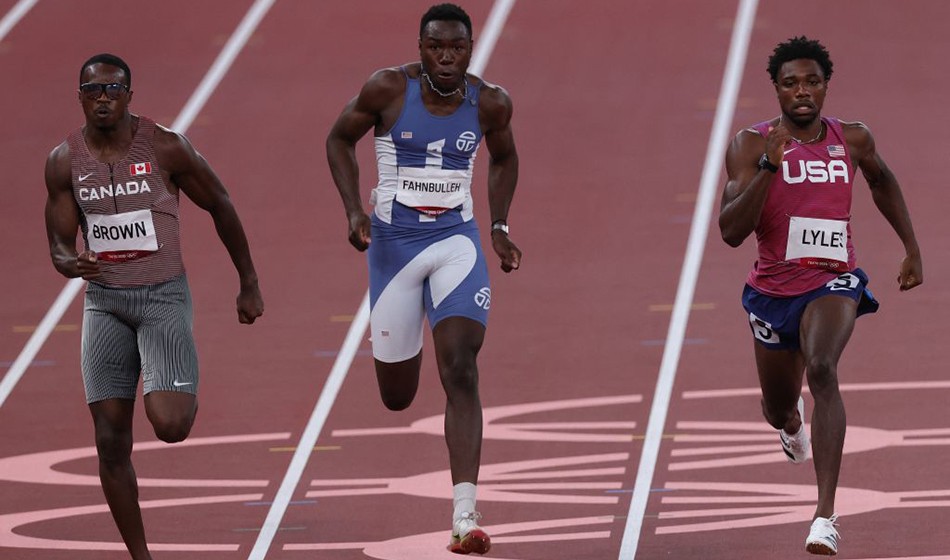 World champion goes through to final after finishing third, as we bring you a round-up of Olympic qualifying news from Tuesday evening in Tokyo

World champion Noah Lyles scraped into the Olympic 200m final as one of the fastest losers after inexplicably easing down at the finish of his semi-final and winding up third in a race won by Aaron Brown of Canada from Joseph Fahnbulleh of Liberia – with all men running the same time of 19.99 (-0.4).

Lyles said: “It is not a win-lose situation. I’m glad I made it to the finals and that is all that matters. I knew I was going to make it. It was a bit risky, I wouldn’t lie, but I made it.”

Quickest of all in the semi-finals was Andre de Grasse as he scorched to a Canadian record of 19.73 (0.2) to win from Kenny Bednarek – the American running 19.83.

“I knew I had it in me,” said De Grasse. My PB was from 2016 and I knew I was better than that. Especially coming off the personal bests (in the men’s 100m) a couple of nights ago.

“I didn’t expect to go that fast. I wanted to save it for the final but Kenny was pushing me a little so I had to make sure I qualified for the final. My coach said make sure you qualify first because you want to have a good lane for tomorrow night.”

Erriyon Knighton, only 17, won the first semi-final in 20.02 (-0.2) as he cruised through the finish looking around at his rivals.

With 13.02 (-0.1) Grant Holloway led the qualifiers from the 110m hurdles heats. The American lived up to his billing as favourite for the event as Britain’s Andy Pozzi and David King also qualified.

Pozzi ran 13.50 (0.0) in fourth in his Levy’s heat despite clashing arms with a fellow hurdler during the race, while King clocked 13.55 (-0.2) for sixth in Manga’s heat. “We live to fight another day and everyone starts afresh tomorrow,” said Pozzi.

Sergey Shubenkov, the 2015 world champion, did not start his race. Neither did Olympic silver medallist Orlando Ortega. European indoor champion Wilhem Belocian, meanwhile, did not finish his heat. 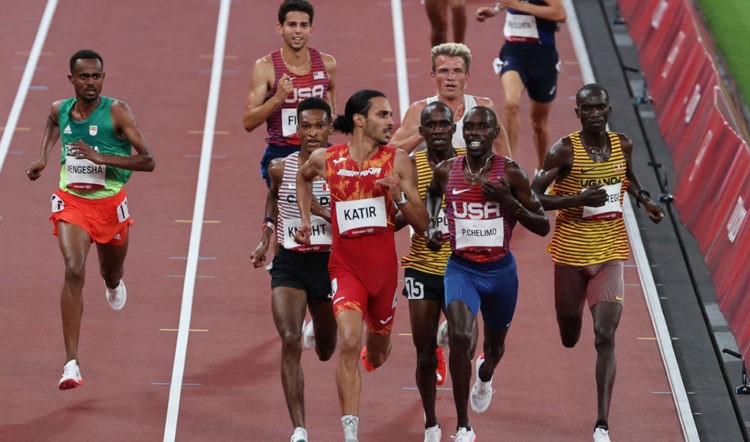 Most of the qualifiers for Friday’s men’s 5000m final came from the second and fastest of two heats. This race was won by Mohamed Katir of Spain in 13:30.10 from Paul Chelimo of the United States with Ugandan duo Joshua Cheptegei and Jacob Kiplimo plus Andy Butchart (13:31.23 in seventh) benefiting from being in the quicker race.

Ten athletes qualified from that race but only five made it to the final from the first and slowest heat. It was won by Nicholas Kimeli in 13:38.87 but Britain’s Marc Scott missed out as he finished sixth in 13:39.61, which was outside the top five automatic qualifiers. Ethiopian Getnet Wale and Italian Yeman Crippa were other notables to fail to make the final after being in the slower heat.

Scott said he felt good but was clipped just coming into the home straight which threw his rhythm a little. Butchart, meanwhile, said: “The second heat is always nice because you can see what you need to do, and how well the first heat did. It is a bit of an advantage and I think we took that.”

In the final, in-form Katir is the man to beat though. “I am prepared for anything, to run fast, to run slow or whatever. Whatever happens, I will be there fighting to death,” he said.

Crouser through, Lincoln out of shot final

World record-holder Ryan Crouser led the shot put qualifiers with 22.05m but Scott Lincoln of Britain didn’t manage to fulfil his dream of making the final as he finished 18th best out of the throwers with 20.42m.

Behind Crouser, Tom Walsh of New Zealand was next best with 21.49m. Joe Kovacs of the US also qualified with 20.93m which means all the medallists from the epic final in Doha in 2019 made it to Thursday morning’s final.