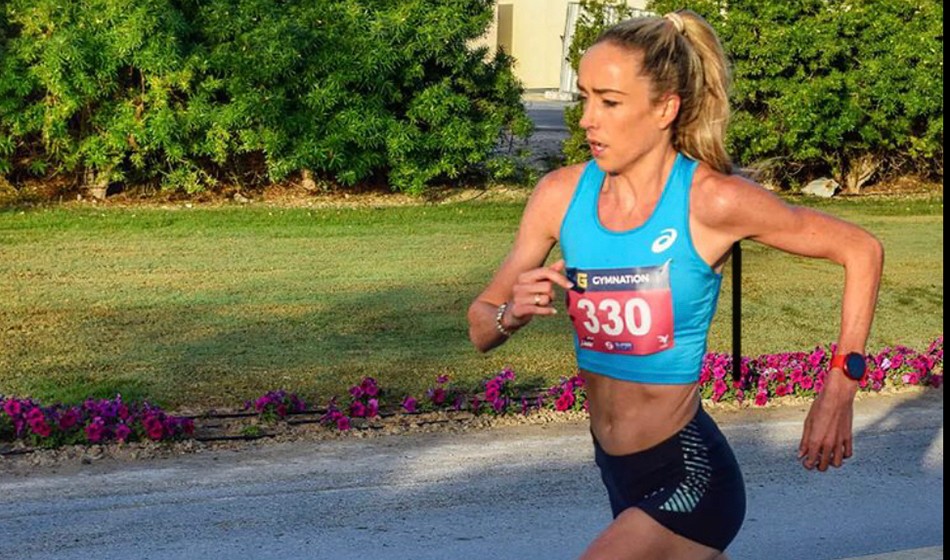 Marc Scott’s European 5000m mark was not the only record of note or great performance at the weekend as all age groups enjoyed thrilling competition.

Radcliffe ran 14:51, which was a world best, when she won the Flora 5km at Hyde Park in 2003 and while she did run a reported 14:48 at halfway during a 10km world best in San Juan that was insufficient for record purposes.

Beth Potter did run 14:41 in Barrowford in 2021 but that time was also never ratified.

Curiously it was the first 5km race that McColgan had run since 2016 and moved her up from 64th in the UK all-time rankings and above her mother Liz’s 14:57 from 1991, when Eilish was not even one year old.

McColgan races next in the RAK Half-Marathon in the United Arab Emirates on Saturday. 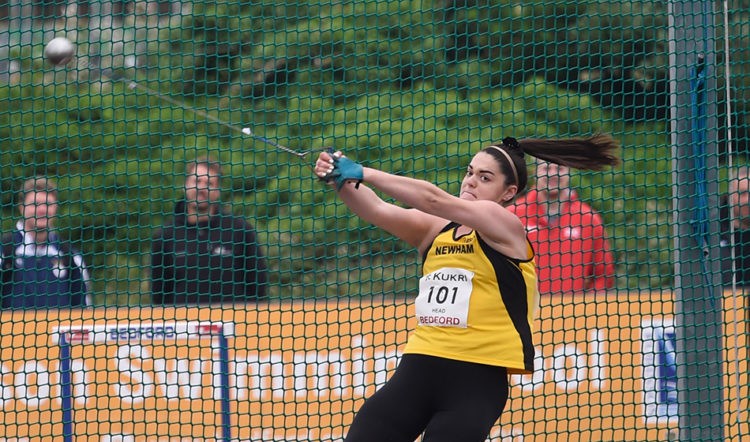 It was a stunning four-metre PB and moved her up from 13th with her 65.39m last summer.

Kayleigh Presswell set a PB of 64.77m in second.

Nick Percy was the men’s discus winner with a 59.46m throw.

Windy City Invitational, Chicago, February 11-12
NCAA 5000m champion Cooper Teare clocked a world-leading 3:50.17 in the mile to achieve the seventh-best performance ever, just ahead of NCAA 1500m champion Cole Hocker’s 3:50.35 which was the eighth- best ever time.
Teare ran 1:47.32 in the following day’s 800m to place third.

Joe Ellis set a British best in the weight throw with a 24.07m effort.

Metz, France, February 12
In this World Indoor Tour silver meeting in her first competition of the year, Femke Bol set a world-leading 50.72 in the 400m.

Arthur Cisse took the honours in the 60m in 6.53 to equal his Ivory Coast record and defeat American Cravont Charleston’s 6.54.

Akela Jones won the long jump with a 6.80m leap to equal her Barbadian record.

On the second day, Abby Steiner achieved a world-leading time and US collegiate record over 200m of 22.37. Ireland’s Rhasidat Aledeke ran 22.87 in a different race. 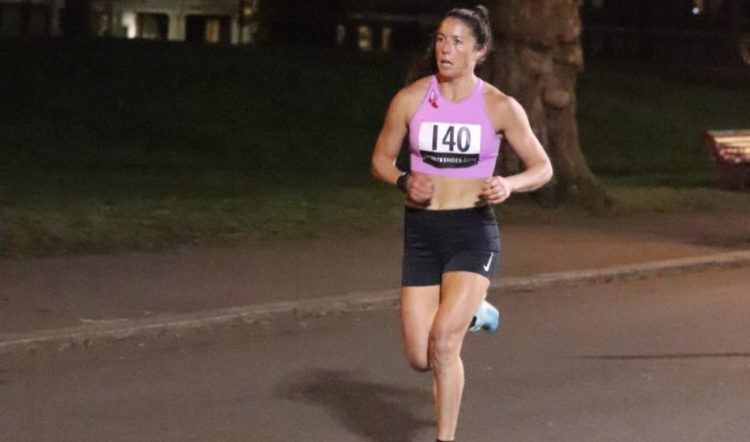 The latter finished narrowly ahead of Charlotte Arter’s 15:56 and Cari Hughes’ 15:57. 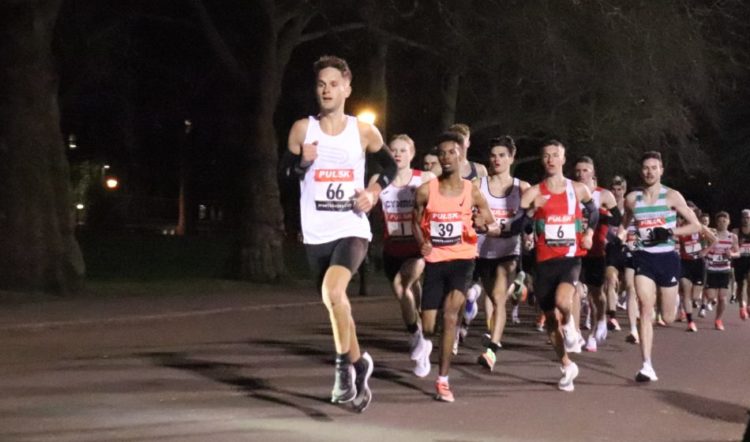 Despite restricted entry (only sub-16 men could compete), 147 set PB’s including 30 of the first 35 in the first non-elite men’s wave and three of those that didn’t were Vets. 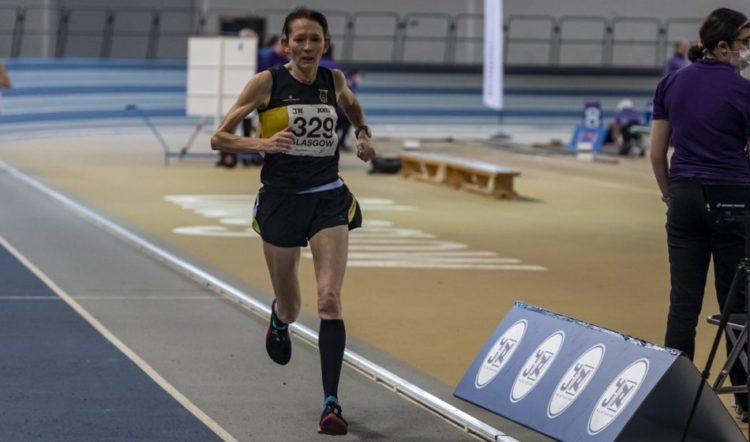 Another world lead was set by Josh Awotunde’s 21.53m indoor PB ahead of Darrell Hill’s 21.20m.

Olympic hurdles champion Jasmine Camacho-Quinn also went top of the world with a Puerto Rican record 22.54 in the 200m.

Sandi Morris won the pole vault with a 4.71m leap.

There were hurdle wins for Devon Allen (7.50) and Jamaican Brittany Anderson (7.82).

The women’s hurdles was won by Aliah Armstrong’s 7.81 PB.

Tara Davis won the long jump with a 6.84m leap.

David Hemery Valentine Invitational, Boston, USA, February 11
Gabriela DeBues-Stafford set a world lead and Canadian record of 14:31.38 in the 5000m. It was the fifth-fastest run of all-time. Elise Cranny set a US indoor record of 14:33.17 in second.

There was also a Canadian victory in the mile for Lucia Stafford with 4:24.42 ahead of Mexican Alma Cortes’ Mexican record 4:27.09

Dortmund, Germany, February 12
KC Lightfoot won the pole vault with a 5.95m leap before attempting a US record 6.03m.

Running Grand Prix, Goodwood, February 13
James Baker, 45, got ever closer to his quest for 1000 outright race wins with victory number 983 in a 2:35:03 marathon victory on Goodwood Race Circuit. Diane Leggott won the women’s race in 3:01:33.

Andrea Clement was second in 29:56 and led hosts Blackheath and Bromley to victory on the day but, in the overall standings, it was Tonbridge led by third-placer under-20 Imogen Amos (30:19) who just pipped Marchant’s Cambridge Harriers side by a few individual match points having been equal on match points. 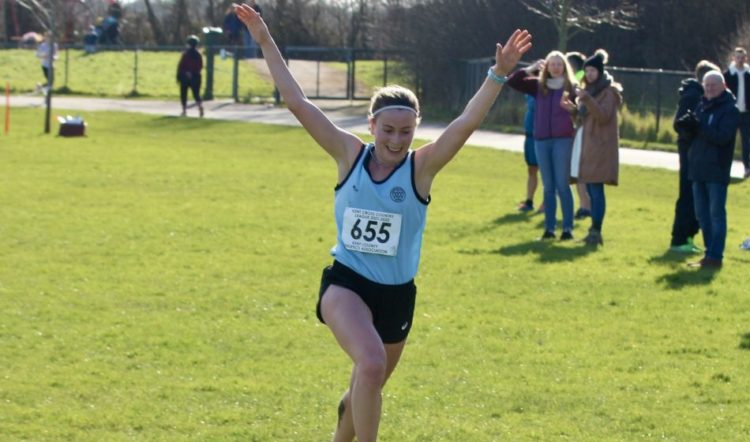 De’ath led Tonbridge to an easy team victory as they placed seven in the first 10. They also dominated all the men’s team competitions.

Tonbridge also had the individual league winner in Michael Ellis. The consistent athlete who has been fifth or sixth in last five league races took the overall honours with a sixth place here, just under a minute down on De’ath. 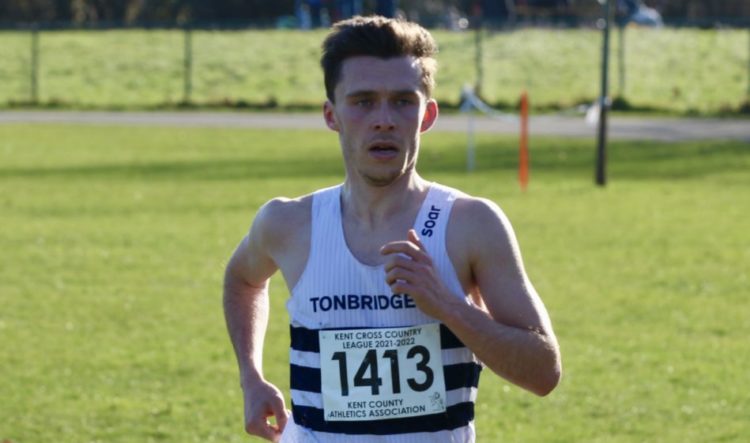 Start Fitness North Eastern Harrier League inc Sherman Cup and Davidson Shield, Temple Park, South Shields, February 12
On a course that hosted the English National event in 1994 won by David Lewis, there was a men’s win for Matthew Briggs (30:15) from Conrad Franks and Stephen Jackson (both 30:34) and the team race matched the individual clubs order with Morpeth winning from Gateshead and Sunderland.

Morpeth also won the Sherman Cup held over all the male events. 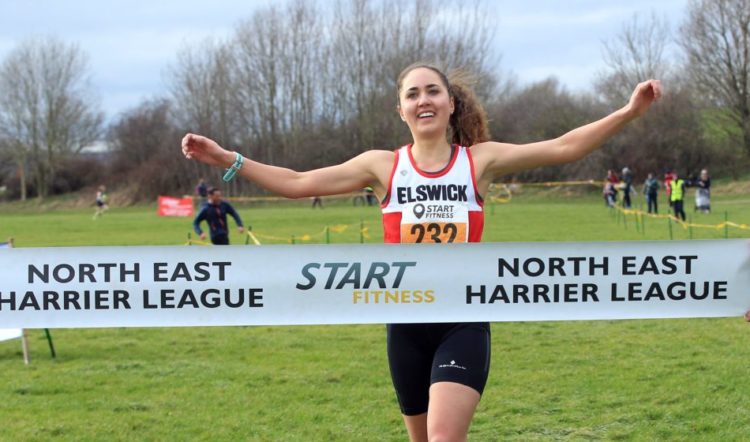 Even though they did not win any of the five team events, Tyne Bridge were consistent and won the Davidson Shield for being the top overall women’s club.

Multiple European Masters champion Francisco Reis, who is now a M60, won the three miles in 26:43.

W40 Helen Gaunt won the women’s race in 35:32 in a field that was enhanced by places in the England masters road running team being available.

World triple jump record-holder Yulimar Rojas began her 2022 season by finishing a close second in the long jump as her 6.55m was matched by Irati Mitxelena, who won on a better second jump.

Uppsala, Sweden, February 13
Pal Haugen Lillefosse cleared a 5.83 to regain his Norwegian record lost in America as Sweden won the match in both men’s and women’s categories.

There was a Russian record in the 500m for Saveliy Savlukov, who clocked 61.25.

Oceanian and Australian 20km Championships, Adelaide, Australia, February 13
Jemima Montag set an Oceanian 20km race walk record of 1:27:27 to take 17 seconds off of the mark of Jane Saville set in 2004

Margaux Sieracki of France won the women’s race in 15:32.

Isabel Wakefield improved her PB to 8.15 in the 60m hurdles to go top of the UK rankings.

There was an Ugandan record and World lead for World champion Halimah Nakaayi of 1:59.55 in the 800m.

US hurdler Jarret Eaton won the 60m hurdles in 7.50 just ahead of Pascal Martinot-Lagarde’s 7.51 and Rafael Pereira equalled the South American record in third with 7.58.

Slovenian Tina Sutej won the pole vault on count back over Iryna Zhuk of Belarus as both cleared 4.70m.

Lodz, Poland, February 11
Ewa Swoboda returned to set a 7.04 World lead and Polish record in her 60m heat before improving to 7.00 in the final to go tenth all-time.

Zaynab Dosso equalled the Italian record from 1983 with 7.19 in second.

Olympic 100m champion Marcell Jacobs equalled his European lead in the heats with 6.51 before improving in the finals to 6.49.

A distant second was Mike Rodgers in 6.62.

In the shot, Konrad Bukowiecki improved his European lead to 21.39m.

Belarus Winter Throwing Championships, Minsk, Belarus, February 8
There was a Belarus javelin record for Aliaksei Katkavets whose opening round 87.53m and improved the 27 -year-old mark of 87.40m by Vladimir Sasimovich