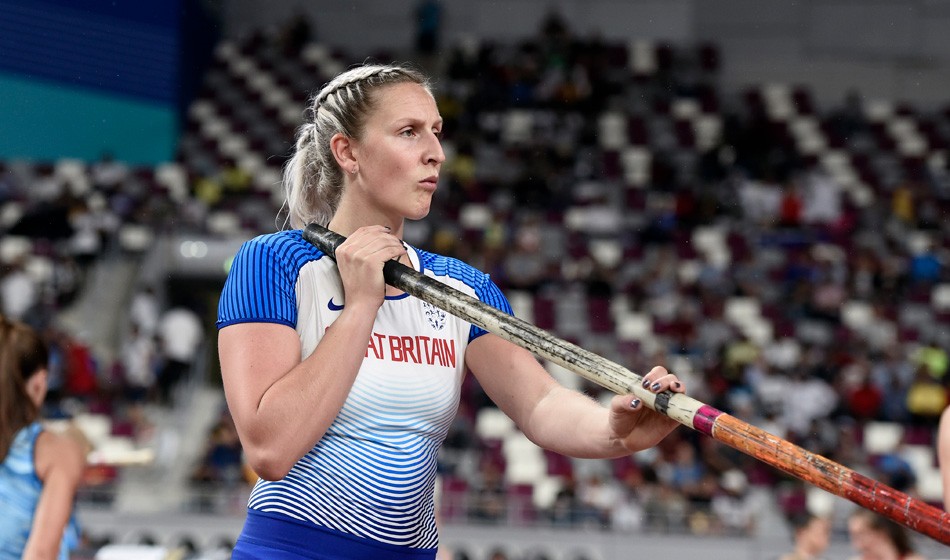 Pole vaulter eases through to final, although GB team-mates Morgan Lake and Ben Williams go out during field events qualification on the first day of IAAF World Championships

“It couldn’t have gone better,” said Bradshaw, who sat out the opening heights before entering the competition at 4.60m, which she cleared first time.

“That was always plan A,” she continued. “We decided to open at the auto qualification height. I’ve done it a couple of times in training and I felt really good for it, so I went for it and it went really well.

“I usually open at a 4.50-4.55m in a qualification anyway so I had to wait maybe an extra 10-15 minutes. It’s always pretty good practice for me as at the British Champs I have to wait quite a while.

“I knew I was going to have to wait 90mins to two hours – that doesn’t really bother me, I have quite a good strategy for that and I’m ready for the final now.”

Interview with @HollyBradshawPV after she qualified for the pole vault final with just one jump. “I’m ready for the final now.” #WorldAthleticsChamps pic.twitter.com/ON5UZIN9l3

Katie Nageotte of the United States, Anzhelika Sidorova of Russia, Alysha Newman of Canada and Yarisley Silva of Cuba were also among the qualifiers.

Juan Miguel Echevarria led the men’s long jump qualifiers with an impressive 8.40m (-0.4m/sec) mark in the first round. Last year the 21-year-old from Cuba won the world indoor title and registered the longest jump since 1995 with a slightly wind-assisted 8.83m. He missed the second half of the 2018 season with injury but looked in fine shape in Doha.

Olympic champion Jeff Henderson of the United States was second best in qualifying with a third-round leap of 8.12m into a slight headwind. Also over eight metres were Yuki Hashioka of Japan, Steffin McCarter of the United States, Ruswahl Samaai of South Africa, Eusebio Caceres of Spain and European champion Miltos Tentoglou of Greece, although reigning champion Luvo Manyonga of South Africa only qualified in 10th place with 7.91m (0.5m/sec).

Hammer thrower DeAnna Price threw a mighty 78.24m earlier this season. It was a world lead, North American record and put her No.4 on the world all-time rankings.

The 26-year-old US athlete showed great form in Doha on Friday to lead the qualifiers with 73.77m and looks set for a big improvement on her ninth place at London 2017 in Saturday’s final.

Zalina Petrivskaya of Moldova was next best with 73.40m with Joanna Fiodorow of Poland third best with 73.39m.

If fit, Anita Wlodarczyk would have been going for her fifth successive world title. The Olympic champion and world record-holder was in Doha but working for Polish television after having knee surgery earlier this year.

Mariya Lasitskene led the women’s high jump qualifiers as the Russian, who competes as an authorised neutral athlete, jumped 1.94m along with seven fellow competitors.

Vashti Cunningham of the United States and Mirela Demireva of Bulgaria also cleared 1.94m, whereas Yuliya Levchenko, the Ukrainian who beat Lasitskene at The Match in Minsk recently, also progressed to Monday’s final with a best of 1.92m.

For Britain’s Ben Williams his brilliant breakthrough season fizzled out as he failed to make the triple jump final. This season has seen him jump a big PB of 17.27m but he leapt out to 16.77m (0.3m/sec) in Doha for 17the out of 33 athletes. “It just didn’t click today,” he said. “I felt all right going into it. There are no real excuses, I just wasn’t executing right.”

A track events report can be found here.

Check out the dedicated Doha 2019 section on our website here.