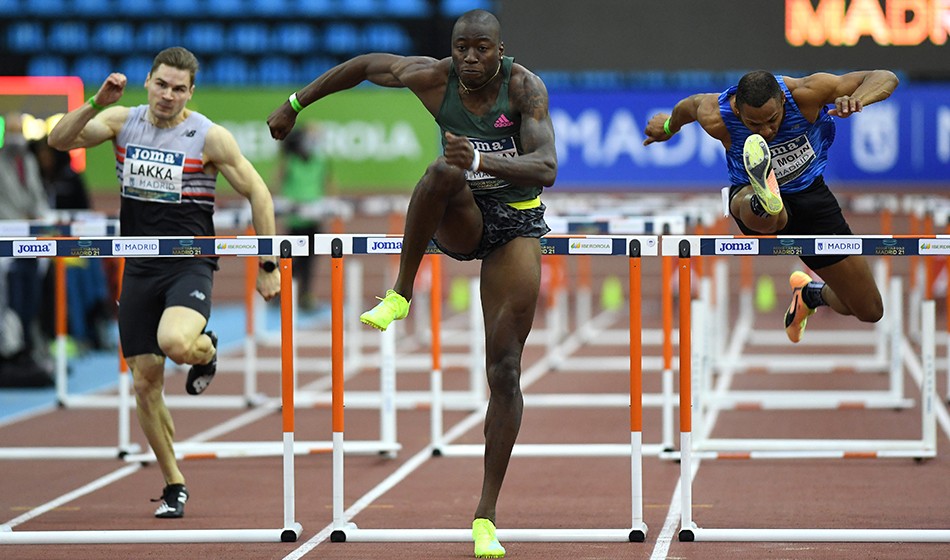 American clocks 7.29 to beat the Briton’s long-standing mark by one hundredth of a second at the World Indoor Tour Gold in Madrid

Colin Jackson’s world indoor 60m hurdles record of 7.30 has looked on borrowed time this winter and the in-form Grant Holloway finally broke the Briton’s mark in Madrid on Wednesday (February 24).

Initially the American’s time flashed up as 7.32 and frustratingly outside the record, but after an agonising delay it was confirmed as 7.29 as he took one hundredth of a second off Jackson’s best.

The 23-year-old from Virginia won the world title outdoors in Doha in 2019 and has been in scintillating form this year. In Madrid he clocked 7.32 in his heat to give Jackson’s record a scare and then improved in the final as Britain’s Andy Pozzi, the world indoor champion, finished runner-up in a season’s best of 7.51.

Time was running out this season for Holloway to break Jackson’s record too. It was his final race of his indoor campaign and the final meeting in the World Athletics Indoor Tour Gold.

“I wouldn’t say the race was perfect,” said Holloway. “I will need to watch the race and see what I did wrong and what I did right.

“I tied my PR in the heat and when that happens then usually something great is going to happen if you just execute in the final. I told people ‘if the world record falls, it falls’ but I’m just going out to execute my race to the best of my ability and to have fun.”

Stunning hurdling from @Flaamingoo_ to clock 7.29 👏

The omens were good as Madrid has a reputation for staging fast sprint times. In the past Maurice Greene, Andre Cason and Leroy Burrell have broken the world 60m flat record in Madrid, whereas the women’s 60m mark has fallen to Nelli Cooman, Merlene Ottey and Irina Privalova in the same city.

“I had been told by several people that the track was fast,” said Holloway, “but my goal was just to come out and execute my race to a high level. Most of my races this year have been in the 7.3s. This year my coach and I said why not break the norm of running 7.5 or 7.6? I thought I’d run 7.3 and make everybody work!”

Jackson’s record had stood the test of time. It was set in 1994 when the Briton enjoyed a momentous indoor season. Firstly, he equalled Greg Foster’s world record of 7.36 in Glasgow before claiming the mark as his own with a 7.30 clocking in Sindelfingen, Germany. In the form of his life, he then captured a golden double at 60m and 60m hurdles at the European Indoor Championships in Paris a few days later.

But Holloway has now surpassed Jackson’s mark and speculation will turn to how much he can improve his 110m hurdles best of 12.98 this summer. A great all-round athlete – with a long jump best of 8.17m and a 44.75 split from a 4x400m to his name – this year he seems a class apart from his rivals in his specialist event.

“My aim for the outdoor season is just to keep going,” he said. “We will celebrate for a bit and take it all in.  But the past is the past so my main goal is to continue to execute and drive forward.

“When I get back to Gainesville I’m going to have a good old steak and watch a film. When I go to sleep tonight the world record will be in the past and the next goals are to win the US trials and the Olympic Games.”

And Aries Merritt’s world 110m hurdles record of 12.80? “It’s definitely in my sights,” he said, “but first of all I want to take it all in and continue to do what we got to do.”

Juan Miguel Echevarria, the world indoor champion from Cuba, took the men’s long jump victory with 8.14m from the opening round.

Nadine Visser of the Netherlands continued her fine form, too, as she equalled the world lead of 7.81 in 60m hurdles.

Pavel Maslak, the three-time world indoor champion, warmed up for the European Indoor Championships by winning the 400m in 46.12, while Iryna Zhuk of Belarus took the women’s pole vault with 4.67m.

Morgan Lake won the high jump with an Olympic qualifier of 1.96m, while Mondo Duplantis took the pole vault with 6.10m.

Full results from Madrid can be seen here and from Belgrade here.