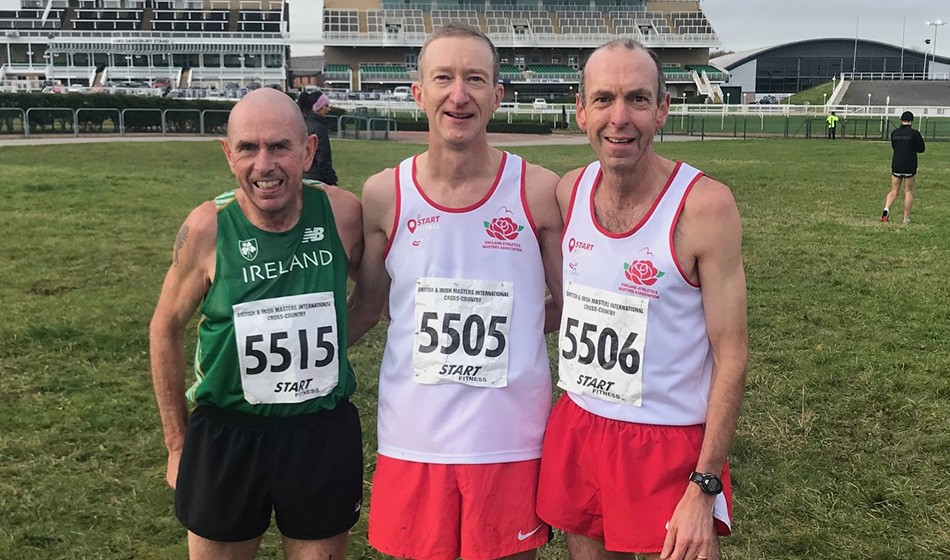 With home and population advantage, as expected England dominated at Aintree taking 12 of the 17 team titles at the annual British and Irish Masters International cross-country event, although the other nations had their moments as England struggled in a few younger age groups.

England won 10 of the 18 individual titles on offer and some of the best ever and current top masters such as Nigel Gates, Tim Hartley, Andrew Leach, Clare Elms and Angela Copson were among their winners.

All-time great Gates, who was second in the M65 race last year, went one better this time, pulling clear on the last lap from England team-mate David Butler, who himself was a three-time M55 winner and has made a good recovery recently from a broken leg.

Northern Ireland had a great day in Aintree and their former M65 champion Terry Eakin dominated the last lap of the M70 race, having he admitted trained hard on the sand in recent weeks on the Ulster coast.

Peter Giles, who was once in a band with famed guitarist Robert Fripp, was the day’s biggest winner – close on two minutes – as he won the M75 title having clung on to the back of a group containing Eakin until the final flat 2km circuit inside the famous Merseyside venue, which stages the Grand National horse race every April.

The M65 and W65+ race was making its debut as a separate race, and was previously lost among the women but sensibly splitting the field gave more space and allowed Ann White of Scotland more attention as she, like Gates, went one better than in 2018 as she also led Scotland to a team win.

Only a few seconds back at the end was W70 champion Angela Copson, who incredibly won her 12th successive title in the event. She was followed in by European champion and Olympian Penny Forse.

Ann White leads Scotland to a clear win in the W65 team race at the British and Ireland Masters International at Aintree a few seconds ahead of W70 winner Angela Copson of England pic.twitter.com/aYZwxbfTVA

This time it was Longley who was stronger on the last lap and buoyed by her recent 33:40 10km PB at Leeds, she won by 11 seconds from Doherty.

The W35 team race went to Ireland as England were only the fifth team.

England also won the W50s and W55s and their W55 and British masters athlete of the year Clare Elms was the only runner to beat all the younger age group.

The three-time W50 winner was disappointed with her third place last year but was happier with her run here in her new age group, just behind W45 Stepto and well clear of European 5000m champion Annette Kealy of Ireland, who took the W50 crown ahead of England’s Sue McDonald to replicate their world masters positions from Torun earlier this year, where Elms also headed Kealy.

The third race off was the M50 to M60 event and there M50 Tim Hartley was another to hold back before easing away on the final lap and he won by 20 seconds from Northern Ireland’s Eamonn White, who with Steve Cairns third led Northern Ireland to a clear win over England.

Third overall in the race was European M55 10,000m champion Andrew Leach who was another coming off a fast 10km in Leeds, where he almost broke the British record for his age group.

He won by half a minute from Ireland’s Tommy Hughes, who had a sensational road result of his own recently when he ran a world 59 age best of 2:27 for the marathon in Frankfurt.

The M60 race was the closest of the day. Defending champion Alastair Walker, who is the reigning world and European champion at 10km on the road, moved clear on the last lap and seemed destined for another clear win but Robert Atkinson finished fast and was just a second down at the finish.

The day’s final international race was the M35 to M45 race. That also saw a defending champion win in style as Mark McKinstry, the current Northern Ireland senior champion, blasted away on the first lap and won in a sensational 24:51 for the 8km, which had quite a few muddy sections.

Mark McKinstry retains his M35 title with a runaway 30 second victory at the British and Ireland Masters International at Aintree in a lightening fast 24:51 for the 8km pic.twitter.com/ZAeclRlkZX

Scotland’s M35s Stuart Gibson and Richard Mair followed and led their team to a big win over Ireland with England again out of the medals in the youngest age group.

English M45 Terry Scott headed the M40s on the first lap and though slowing held on well to easily win the age group and while England had disappointment in some age groups that wasn’t the case in the in Scott’s age group as they packed six in the first eight for the most dominant team display of the whole day.

There was an open race at the end of the programme where European masters W40 champion won the women’s race, but full results weren’t available after the event.

The 1974 European and Commonwealth marathon champion and record-holder (2:09:12) Ian Thompson, who recently turned 70, competing in the open race at the British and Ireland Masters International at Aintree. He was the world No.1 that year and second fastest in history pic.twitter.com/rLd75AQG7d