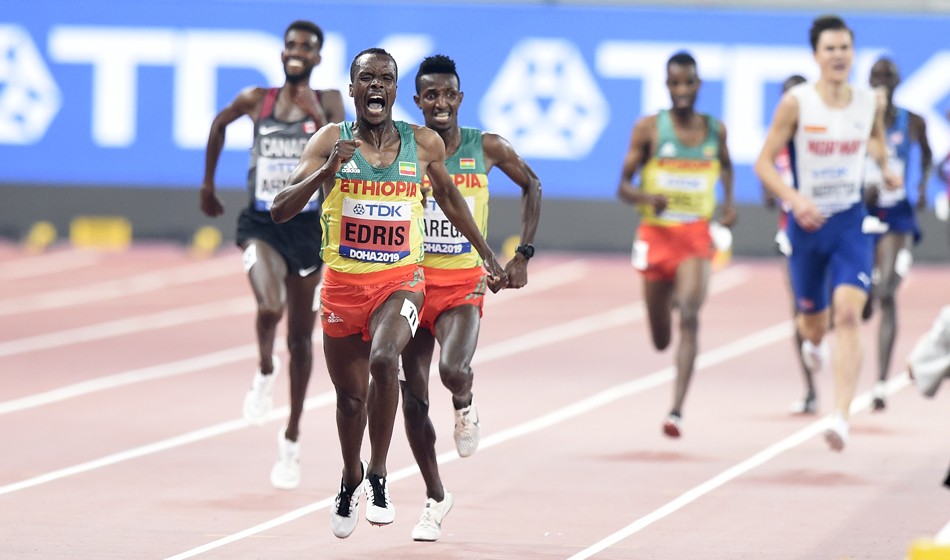 Two years ago Muktar Edris beat Mo Farah to the world 5000m title in London and this time the Ethiopian overcame the challenge of Jakob Ingebrigtsen, not to mention his fast-finishing team-mate Selemon Barega, to successfully defend his crown.

Returning from injury and a summer of mediocre results, Edris hit top form on Monday night in Doha as he sped away from Barega to win in 12:58.85 as Mohammed Ahmed of Canada was third and Telahun Haile Bekele of Ethiopia fourth.

Ingebrigtsen, who turned 19 last month, made a long run for home with 300m to go but began to tie up around the final bend and his legs turned to lead in the home straight although he dramatically hurled himself at the line to snatch fifth place from Jacob Kiprop of Kenya.

Jakob Ingebrigtsen in demand in the media zone after his epic 5000m effort. Norwegian finished the race with plenty of cuts on his legs and no medal but he's still smiling. #WorldAthleticsChamps pic.twitter.com/ZSu4VkVkPC

Edris celebrated by doing Farah’s trademark Mobot pose, just as he did when he out-kicked the Briton at London 2017. The 25-year-old later revealed his team-mates shared the pace early on to soften their rivals up.

Finishing with cuts and bruises all over his legs, Ingebrigtsen was in good spirits afterwards, however. The Ethiopians were also all smiles although they know they probably haven’t seen the last of the prodigious teenager from Norway.