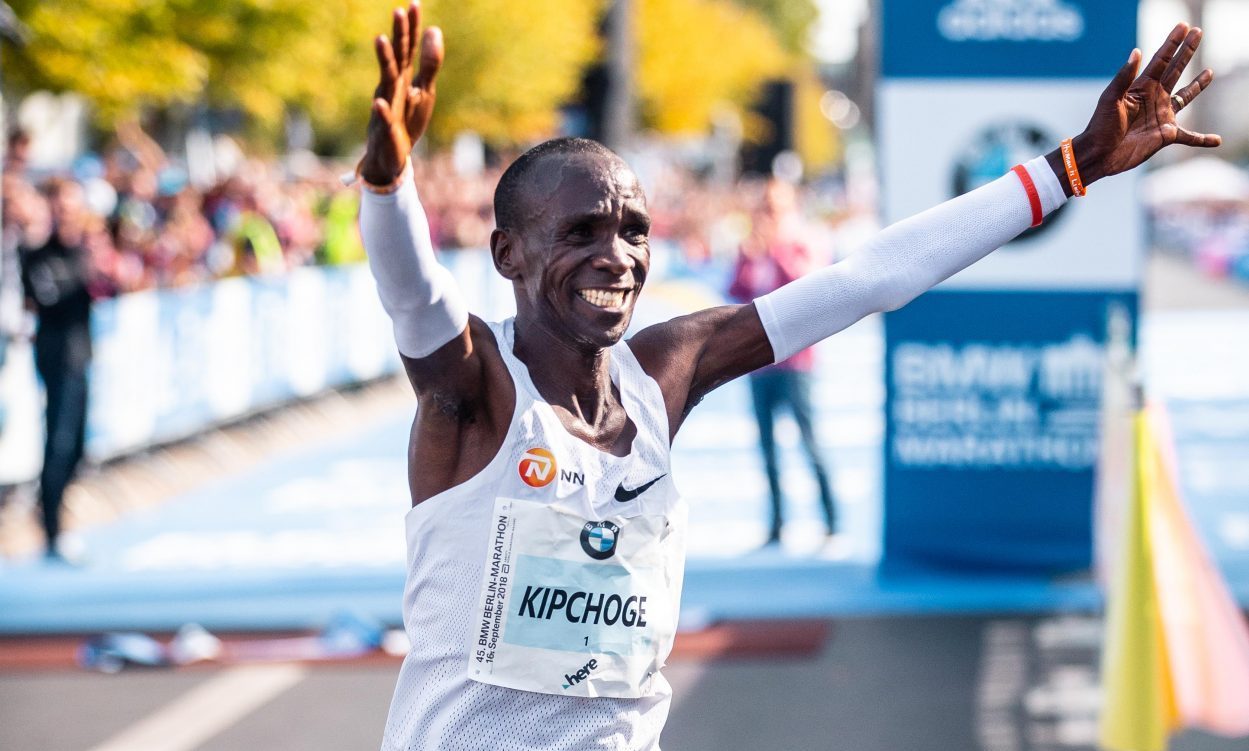 Kenyan clocks 2:01:39 in Berlin to swipe a massive 78 seconds off Dennis Kimetto’s mark

The so-called impossible dream of a sub-two-hour marathon became a little more believable this weekend when Eliud Kipchoge ripped the world record apart with a time of 2:01:39 in Berlin.

The Olympic champion showed why he is regarded as the greatest marathon runner in history as he smashed Dennis Kimetto’s mark of 2:02:57 – which was set on the same German course in 2014 – by 78 seconds.

The 33-year-old Kenyan clocked an unofficial 2:00:25 in the Breaking2 Nike-organised time trial in Monza last year, but on the super-fast Berlin course he set the eighth men’s world record seen in this race in the last 20 years as he flew along the flat German roads under crystal-clear late-summer blue skies on Sunday morning.

Remarkably, he achieved it despite losing his pacemaking help earlier than expected too. His final pacer, Josphat Boit, led Kipchoge through halfway in 61:06 before dropping out at 25km.

“It was really hard,” said Kipchoge, moments after making history, “but I was truly prepared to come to Berlin. I trust my preparation and I knew what hard work I did in Kenya and that’s what helped me in the last few kilometres. I was prepared to run my own race early so I wasn’t surprised to be alone.”

The early stages had seen him flanked by two other pacemakers, Sammy Kitwara and Bernard Kipkemoi, as he passed 5km in 14:24 and 10km in 29:21, but they peeled off soon after 15km, which was reached in 43:38.

Kipchoge seemed unfazed, though, as he went through 35km alone in 1:41:00 (sub-2:02 pace). Meanwhile he was being given drinks at aid stations by a helper on a bicycle who enthusiastically fist-pumped the air whenever he successfully passed a bottle to the leader.

Despite his historic run, Kipchoge did not collapse in exhaustion either. Instead, he ran alongside the spectators at the finish, smiling and celebrating as his achievement sank in.

“I’m really grateful and happy to smash the world record,” said Kipchoge, who first made a name for himself in 2003 when beating Hicham El Guerrouj and Kenenisa Bekele to the world 5000m title aged 18 and, more recently, has won 11 of his 12 marathons, including Rio 2016, Berlin 2017 and London 2018.

“They say you can miss (the record) two times but you can’t miss a third time! So I thank my coach (Patrick Sang) and everyone who helped me do this,” he added.

No human is limited pic.twitter.com/atJ2AJ2Y7q

This means the world record has fallen by 5min 11sec in the past 30 years, with now a tantalising 1min 40 needed to go sub-two.

All eyes were on Kipchoge’s record-breaking run, but the women’s race was also quick with Gladys Cherono of Kenya winning in a course record of 2:18:11 from Ethiopia’s Ruti Aga (2:18:34) and Tirunesh Dibaba (2:18:55).

Dibaba had led through halfway in 69:03 but Cherono was never far behind and took the lead around the 25km mark and finished strongly to beat Mizuki Noguchi’s course best of 2:19:12.

In the wheelchair races, Brent Lakatos of Canada won the men’s title in 1:29:41 from Marcel Hug of Switzerland and JohnBoy Smith of Britain, while David Weir finished 12th.

Lakatos is the husband of British para-athlete Stef Reid. Weir, meanwhile, has chance to get back to winning ways in Chicago and New York City soon.

The men’s race was close with seconds separating the top athletes, but the women’s wheelchair race saw an emphatic victory for Manuela Schar as the Swiss para-athlete clocked 96:53 as, like Kipchoge, she also broke a world record. Her time takes more than a minute off the previous record mark she shared with Japan’s Wakako Tsuchida, which had been set in 2013.

Elsewhere on the roads, Sifan Hassan set a European record of 65:15 when winning the Copenhagen Half-Marathon on Sunday.