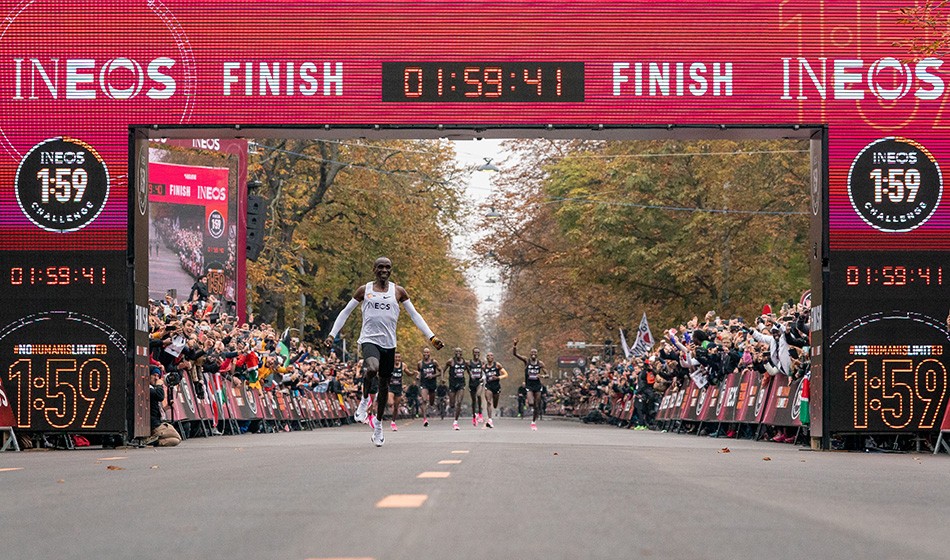 Amazing Kenyan shatters ‘impossible barrier’ with 1:59:41 in Vienna – and even has time to showboat to the crowd near the finish

Not only did Eliud Kipchoge become the first man to break the two-hour barrier for the marathon in Vienna on Saturday, he made it look easy. The remarkable 34-year-old from Kenya clocked 1:59:40.2 with something to spare as he waved and smiled to the crowd in the final stages, showboating down the Hauptallee with his peloton of pacemakers cheering him from behind.

For years it has been described by experts as ‘the impossible barrier’ but with the help of elite athlete pacemakers, new-and-improved Nike shoes and ideal weather conditions in the Prater park in the Austrian capital, Kipchoge achieved what many felt was beyond the ability of a human by shattering the mark at the INEOS 1:59 Challenge.

The mark, rounded up to 1:59:41, will not be ratified as an official world record by the IAAF but it will go down in athletics history as one of the greatest performances in history alongside Roger Bannister’s first sub-four-minute mile and Usain Bolt’s sprints world records. It is also certain to be one of the main stories on every news bulletin and in every newspaper around the world this weekend.

Kipchoge, who holds the official world record with 2:01:39, has likened the achievement to the first man stepping on the moon and after the attempt he draped a Kenyan flag around his shoulders as he began a marathon wave of post-race interviews. Many athletics aficionados believe he is so good that he is capable of breaking two hours in a ratified event.

“It has taken 65 years for a human being to make history in sport – after Roger Bannister made history in 1954. I have tried and I got it. I am the happiest man to run under two hours to inspire people, to tell people that no human being is limited. You can do it,” he said just moments after his run.

“I expect more athletes in the world to run under two hours after today.”

Conditions were near perfect. Certainly, Kipchoge could not have wished for better weather with a temperatures of 11C halfway through the event and virtually no noticeable wind under dull, grey skies.

One factor that was missing when Kipchoge ran the Breaking2 event in Monza in 2017 was a crowd to help cheer him. In Vienna it was different, though, with spectators dotted along the course and a large gathering of fans at the finish area that were several rows deep and making lots of noise whenever Kipchoge and his pacing entourage passed.

It cost millions to build the infrastructure on this course. This included parts of the road on the Hauptallee – the principle pathway that cuts through the Prater park – being re-surfaced.

No stone was unturned. No expense spared. Organisers must have been terrified that Kipchoge would fall victim to injury or illness on the eve of the run. 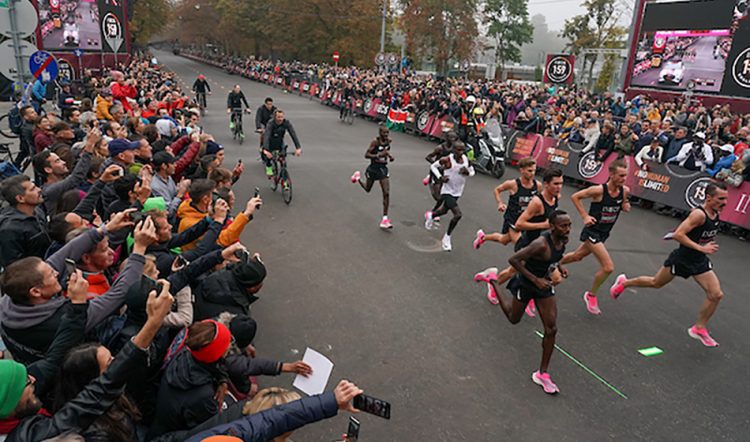 The runners began on the Reichsbrücke bridge with a gentle but significant downhill stretch which meant the early kilometre was a fraction inside the perfect pace of 2:50. After this the course went past the Praterstern railway station on a large round-about that Kipchoge would go on to negotiate several times during the race. The majority of the route, though, was a long, flat straight section on a smooth surface lined by conker trees through the Hauptallee.

Kipchoge looked relaxed throughout as he glided along wearing white kit and his latest Nike Vaporfly shoes. Ahead of him, his pacing team – including Bernard Lagat and the Ingebrigtsen brothers, among others – wore black vests and distinctive pink shoes as they formed a V-shape formation to shield the Kenyan from the wind. Alongside, helpers on bicycles passed him drinks during the race in a carefully orchestrated pattern. 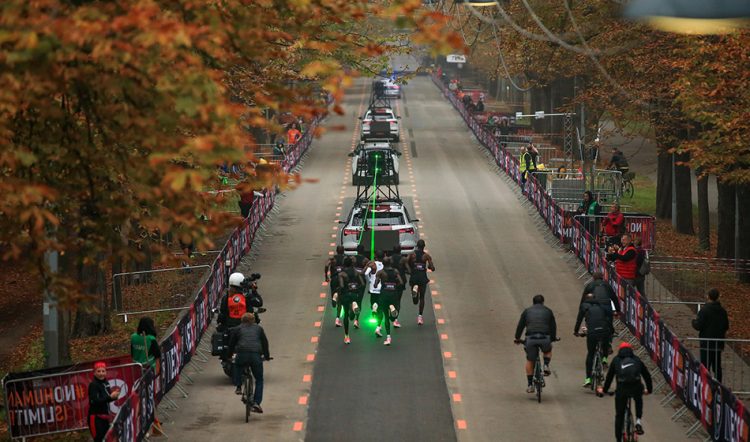 Not only was everything geared around helping Kipchoge get through the miles as comfortably as possible but the entire exercise was aesthetically pleasing with a lead car shining a green laser light on to the ground just in front of the pacers. Ahead of this, meanwhile, the local Polizei had some vehicles to make sure the road was clear.

Everything went to plan. Kipchoge’s training in recent months in Kenya has clearly been brilliant. INEOS organisers then created a stage which would allow it to happen. After his 2:00:25 in Monza two years ago, too, Kipchoge clearly had greater belief this time as well.

In the final 20-30 minutes of the race there was an air of inevitability to it and Kipchoge did not disappoint as he coasted through the finish line and into the history books as one of athletics’ true immortals.