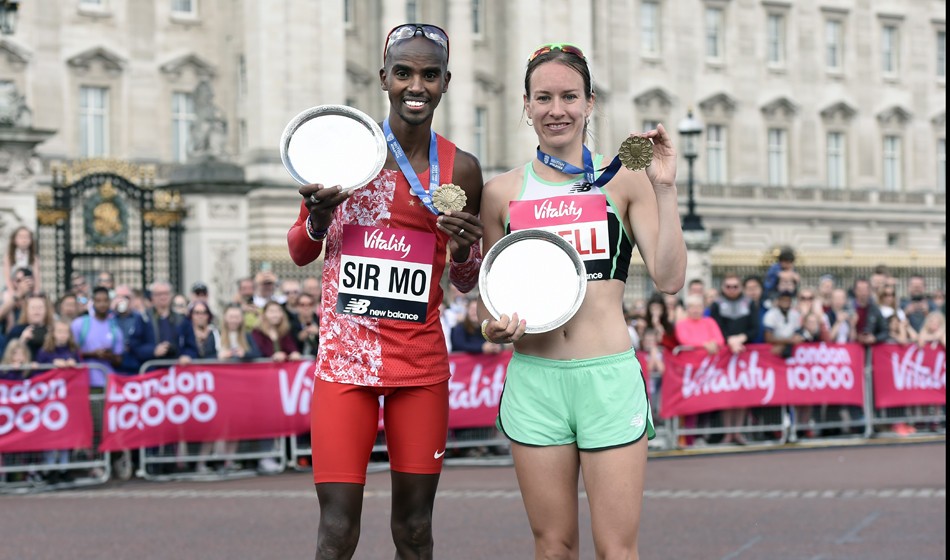 A seventh success for Farah as Twell impresses with PB performance, while Shelly Woods and Danny Sidbury win wheelchair races

Mo Farah and Steph Twell successfully defended their Vitality London 10,000 titles on a sunny morning in the UK capital, with Farah securing a seventh success at the event and Twell impressing with a PB.

Back in action just four weeks after his fifth place in the Virgin Money London Marathon, Farah claimed a clear win on his return to The Mall as he crossed the finish line in front of Buckingham Palace in 28:15 ahead of Andy Butchart who ran 28:28 and Nick Goolab who clocked 28:47.

Twell was an even more dominant winner as she improved her personal best run in Brighton in April by two seconds, clocking 31:55 to finish 38 seconds ahead of Jess Piasecki, with Verity Ockenden a further six seconds behind in third as the top three all ran lifetime bests.

In the men’s race, Farah, Butchart and Goolab broke away early on before the in-form Belgrave Harrier Goolab edged ahead to lead through 5km in 14:08.

He was dropped by the time Farah and Butchart passed 7km in around 19:48 and in the final couple of kilometres Farah was on his own as he kicked on for a 13-second victory.

“He was trying to beat me,” the 10-time global track gold medallist said on the challenge of Butchart, who missed the 2018 summer season because of a broken foot. “When we were on the start line he was like ‘I want to take you down!’ He tells me to my face. He’s being honest and I like that!

“I did the marathon, took a bit of a break and he knew that I am in hard training so he was pushing.”

Scotland’s Butchart had proved his form by running a 5000m World Championships qualifying time of 13:18.16 earlier in the month and was pleased with his return to road race action.

“I’m happy with that. It’s nice to come on to the road again,” said Butchart, a two-time winner of the event with victories in 2016 and 2017. “It was a hard race against Mo, it always is, but I’m happy with second place and my time.

“I had a race plan to try and beat Mo today with surges and to try and make it hard from the gun and throughout the race. He did say after that I was working him but it’s hard to beat Mo at 10km, no one has done it in ages.”

“I had a race plan to try & beat Mo today with surges, to try & make it hard from the gun & throughout the race. He did say after that I was working him but it’s hard to beat Mo at 10km!” @London10K runner-up @andybutchart91 comments on his race, plus his move back to the UK. pic.twitter.com/YLlqETk2MS

Goolab was racing on tired legs, having run 4:05 for fourth in the previous day’s Vitality Westminster Mile, and finished a clear third ahead of Ben Connor with 29:07 and Paulos Surafel in a PB of 29:16.

“As soon as the race went off my legs were exhausted straight away,” said Goolab, who ahead of the race had led the UK 10km rankings with his PB of 28:22 from Brighton in April.

“I just tried to hang with the guys as long as I could. I tried my best and I still managed to finish third, so that’s not bad.”

Twell also had a busy weekend as she too raced the mile and became a world record-holder, having clocked 4:50 while holding hands with her husband Joe Morwood for a Guinness world record.

Running alone this time but in the company of male club runners, the European and Commonwealth medallist and 2:30 marathoner went through 5km in 15:33 and although slowing in the second half she made the most of the crowd support and finished strongly for a PB.

“I’m feeling delighted that I’m the British 10km road champion,” said Twell. “It’s been a fantastic weekend. It’s a fast course out there.

“I knew I was in PB shape but I much prefer the bigger occasions. Today, when I’m running in there with the guys, running hard and strong and with an atmosphere like that, I lapped it up and that’s where I want to be. I’m hoping that’s a good step for my spring build up.”

The now self-coached @StefApril successfully defended her @London10K title with a 31:55 PB performance today and afterwards she spoke with AW about her race and change in coaching set-up #London10000 @scotathletics @AFDACofficial pic.twitter.com/tSlHwYKOO1

Racing for the first time since the World Cross Country Championships in Aarhus, Piasecki ran 32:33 to improve on her PB of 32:44 from 2015.

“Steph went off and I knew that was too fast for me today so I sat in and waited for everyone to come round and nobody did!” she said. “It’s an 11-second PB so I’m happy with that.”

Ockenden was also delighted with another PB performance as she took almost two minutes off her previous best from 2016 and like Twell and Piasecki now targets the Highgate Night of the 10,000m PBs. She had run a PB of 4:35 to finish fourth in the mile the day before.

“I didn’t expect to do so well today,” she said, “particularly as I ran the mile as well yesterday.”