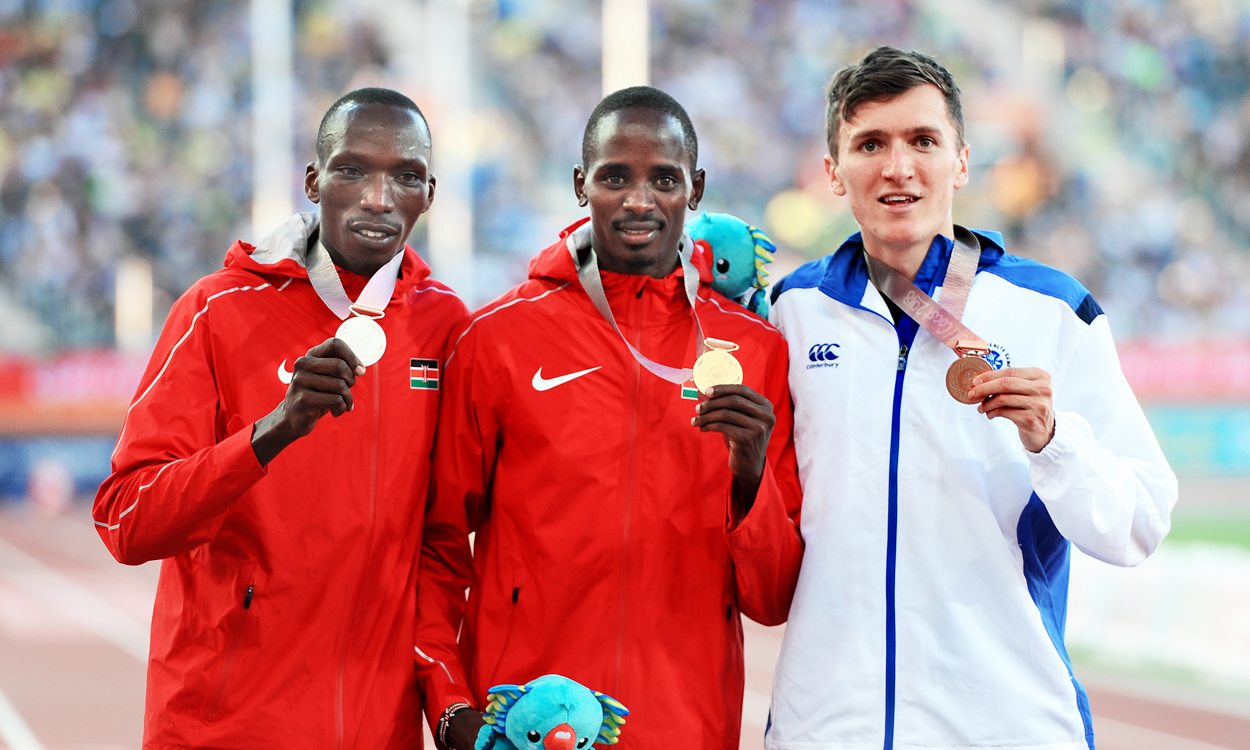 Elijah Manangoi added the Commonwealth 1500m title to his world gold from last summer, again beating Timothy Cheruiyot for a Kenyan one-two, while Scotland’s Jake Wightman claimed his first major senior medal on the penultimate day of athletics action on the Gold Coast.

Wightman’s team-mate Chris O’Hare placed eighth in 3:39.04, while Australians Jordan Williamsz and Ryan Gregson were sixth and ninth respectively. Also racing in front of a home crowd was Luke Mathews, who had claimed 800m bronze ahead of fourth-placer Wightman, and he led the 1500m final through 400m in 60.95 but eventually finished 12th. Harvey Dixon broke the Gibraltar record, clocking 3:43.84 in 11th.

The last time a Scottish athlete won a men’s Commonwealth 1500m medal was 1978, when John Robson also claimed bronze. Steph Twell, who was herself in 5000m action during Saturday’s afternoon session, had won a medal on the women’s side in Delhi in 2010.

“I’ve calmed down a bit now but it’s definitely a special moment for me, my first championship medal,” said Wightman, whose father and coach Geoff was commentating on the race at the Carrara Stadium.

“After missing out on a medal in the 800m, I knew that I needed to come here and get one. I didn’t feel great in warm-up but I trusted myself on that last lap.

“The Kenyans are pretty hard to beat so I knew it was always going to be a scrap for bronze, maybe a silver if I was lucky, but I’m so glad that’s come off like it has.”

Reflecting on the race, the 23-year-old, who received his medal from two-time Olympic champion and IAAF president Seb Coe, added: “I think Luke (Mathews) did us a favour by getting on the front because he knew that they (Manangoi and Cheruiyot) were going to push it on. He definitely helped me out and I think that’s probably a favour from him nicking the bronze from me in the 800m!

“We’ve both come away with medals out of all that. I’m ecstatic. I need to go and see Dad. I tried to look for him up there but I couldn’t find him. I’m hoping he’s pretty happy with that.”

“A medal is so nice, so sweet. It’ll stay there forever.”

In field events action, Troy Doris won the triple jump for Guyana with his 16.88m leap from the second round. Dominica’s Yordanys Durañona secured silver and Cameroon’s Marcel Mayack II bronze as just eight centimetres separated the medallists. England’s Nathan Douglas finished fifth with a best of 16.35m in a series which featured four fouls.

“It is very disappointing because I so wanted that gold medal,” said Douglas, who finished fourth in 2010. “The mindset I came with, even if I had got silver or bronze I would have been disappointed, because I so badly wanted gold.

“Today I couldn’t find the pattern of my runway. The headwind was catching me and I literally thought I was fighting against the wind. So I struggled out there and I’m annoyed and frustrated because the gold was so winnable.”

The men’s 4x400m final was the last event on the Carrara Stadium track and was won by Botswana in 3:01.78, as individual 400m champion Isaac Makwala anchored them to victory and then took part in group push ups at the finish.

England had not reached the final after Matt Hudson-Smith, who was disqualified from his individual event heat for a lane infringement, pulled up injured on the first leg.