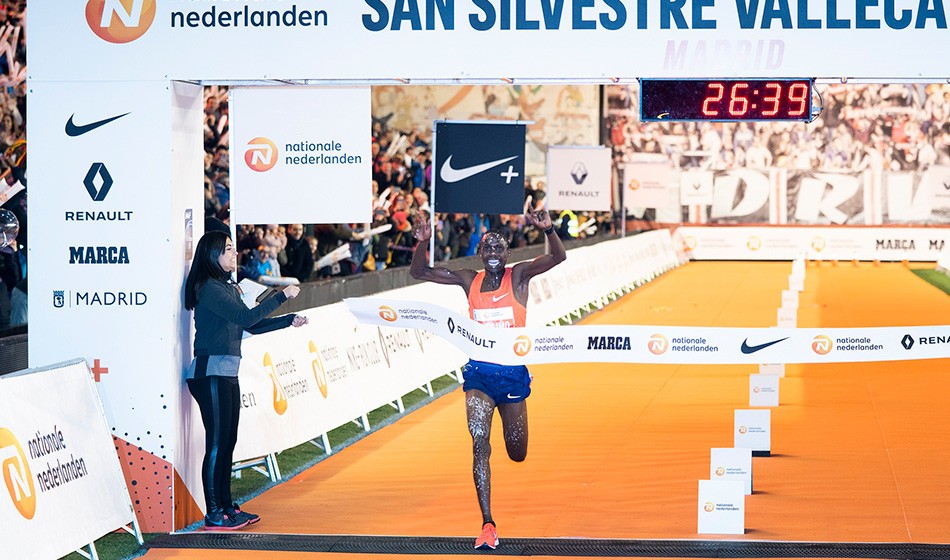 The slightly downhill point-to-point course means the mark can’t count as a world record but the world under-20 cross country champion’s impressive performance takes 13 seconds off the previous race record set by Eliud Kipchoge in 2006.

There was also a course record in the women’s race as Kenya’s Brigid Kosgei ran 29:54, improving Gelete Burka’s previous record mark by a minute.

In the men’s race, the first two kilometres were covered in 5:24 before half way was passed in 13:12.

The women’s race saw Kosgei and Kenya’s Hellen Obiri pass 3km in 8:46, eight seconds ahead of Ethiopian star Tirunesh Dibaba, and the leaders clocked 14:40 at half way.

The races were founded by the late Bernard Baldwin in 1958 and traditionally offer athletes a last racing opportunity of the year. The race that was originally held over four miles and through the turn of midnight, boasts a list of previous winners that include Tony Simmons, Dewi Griffiths and Charlotte Arter.

It was another famous winner, David Bedford, that along with Welsh rugby star Sam Warburton and Paralympian Rhys Jones were the mystery runners this time.

International orienteer Kris Jones had previously won here in 2016 and began as a pre-race favourite with returning champion Ieuan Thomas the most likely to cause an upset.

This time however, Jones led from gun to tape, only increasing his lead as he covered the new four-lap course in 14:19.

“I’m happy with that,” he said. “I went out hard and got a little gap, so I just decided to keep on pushing and make it a hard race.”

Cardiff AAC’s Thomas was unable to retain his title but was the next best on the night, overcoming club-mate Dan Nash to finish second in 14:49.

Nesbitt was a convincing winner in the women’s race with the Worcester AC athlete taking victory in 16:31.

Ethiopia’s Tamirat Tola and Netsanet Gudeta secured success in Italy, clocking 28:12 for the 10km event and 15:46 for the 5km race respectively.

Tola won ahead of Kenya’s Jairus Birech with 28:24 and Uganda’s Oscar Chelimo with 28:50, while Ethiopia’s Muktar Edris was fourth in 29:01 and New Zealand’s Zane Robertson, who set the fast early pace, was fifth in 29:17.