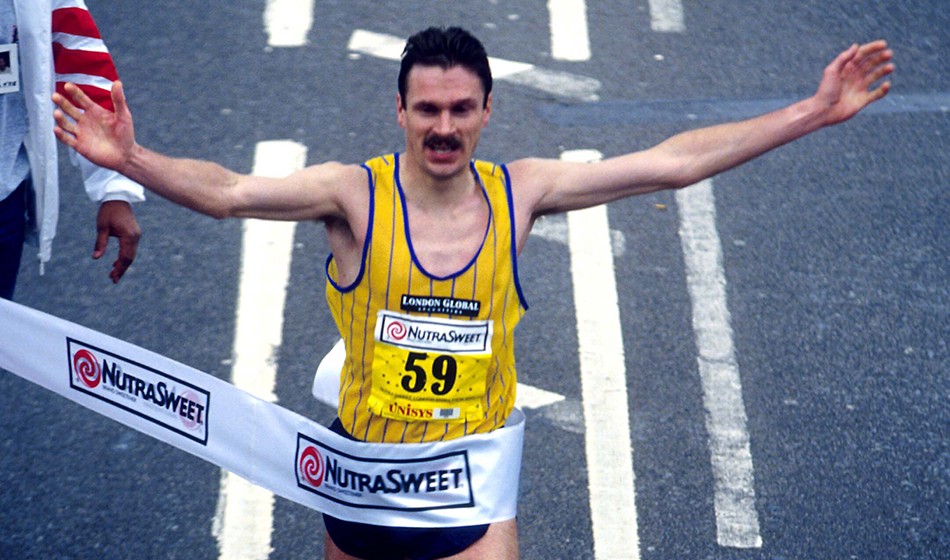 Continuing our series featuring AW content from the past, here is our report of the last time a British man won the London Marathon in 1993 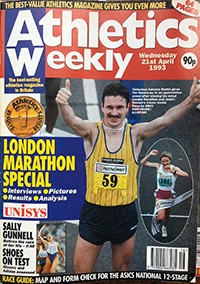 Eamonn Martin’s debut marathon victory won the hearts of the nation, put the pride in British distance running and signalled the start of a lucrative career for the 34-year-old father of three.

Yet just four months ago would-be sponsors deemed him too old to back but Martin had his own answer to them on the streets of London when he produced a performance of which dreams are made.

Martin might have written the script for the race himself as his personal battle to go into the history books enthralled all who watched from start to thrilling finish.

He had become a father for the third time on the Thursday prior to the race when wife Julie presented him with Eamonn Jnr to join daughters Lydia and Rosie and he had predicted at his pre-race press conferences: “Either I shall run really well like I did when I broke the British record on my 10,000m debut or I shan’t finish. But I shall go with the pace.”

In response to those who believed him to be too old to become Britain’s first London winner since Allister Hutton in 1990 – and to those who thought him too heavy to conquer 26.2 miles – he said he wanted to be “the fastest old git on the day”.

True to his word, he ran with a beginner’s cautious respect for the unknown and reserved his major effort for the last 250 yards with all the wisdom of an athlete who has been winning major titles for 20 years since he earned the English Schools junior cross country title.

The official mile splits reveal that Martin led at only one of the mile posts – the last. As planned, he was always in the leading group, and so comfortable that the longer the race progressed, the smoother his action seemed to become.

When the officially-designated pacemaker Mike O’Reilly departed the scene after taking the field through 11 miles in 53:41, Mexican Salvador Garcia, winner of last year’s Rotterdam Marathon in 2:09:16, picked up the pace by reeling off the 12th mile in 4:41 and the 13th in 4:51 as the half-marathon was passed in 64:05.

Then Salvatore Bettiol, the Italian who ran second round London in 1990 and 10th in 1991, hustled the pack through to 16 miles in 1:17:50, whittling the leading group down to four.

Among those to wilt in the face of Bettiol’s blast were Steve Brace, who simply found the refreshing headwind too much to sustain his hopes of forcing the selectors to give him GB’s third place in the World Championships; Ahmed Salah, who is now 36 but looks much more than two years old than Martin; and Thomas Moquali, 33, from Lesotho, who found the weather too chilling to reproduce his best of 2:10:55 and dropped to 11th.

When the 31-year-old Bettiol dropped off the pace, the tough Korean Seung-Do Baek battled on with a boldness bordering on the reckless, as one perhaps expects of a 24-year-old who had run his only other marathon in a highly respectable 2:10:07.

He slipped in a 4:52 18th mile on the Isle of Dogs, but was reduced to 5:06 on the next mile as the wind whipped around Canary Wharf.

As Baek buckled, the race was between three. Pole Grzegorz Gajdus had run the race of his life into third place, taking 1:29 off his previous best but gaining almost as little attention was Dave Buzza, who paced his effort superbly to take sixth place in 2:12:24 to present a strong case to the GB selectors when they top-up the World Championship trio.

Sadly for the 30-year-old Cornishman, by the time he began to pick his way into a prominent position, all eyes were on the battle for victory.

Mexican Isidro Rico, second in Rotterdam last year in 2:09:28, showed tremendous character through the toughest part of the race, the final six miles when the headwind was strongest.

But all eyes were on the man who remained half a stride behind every extra effort he managed to put in. Martin may have been running into the unknown once he passed 20 miles but he was well enough aware of his surroundings to manage a cheerful wave to his coach Mel Batty and admirers as he passed the Tower Thistle Hotel.

He even smoothed into the lead for a few strides as the pair left the cobbles beside the Tower, then slipped back behind the Mexican to wait, wait, wait for the right moment to strike.

Along the Mall the crowd sensed Martin was poised to kick to victory. Their roars of anticipation grew to deafening proportions. But still he waited.

Into Birdcage Walk, Martin still resisted all temptations to surge too early and give the 31-year-old Mexican a chance to hit back.

The decisive move came on the up-slope towards Westminster Bridge with 250 yards to go. It was ruthlessly effective.

Martin opened up a 30-yard gap in 100 yards of sprinting, then held his style to the line.

As he broke the tape, he blew a kiss. Such was the magic of the day, the chances are it travelled all the way to his wife, Julie, still in maternity hospital in Basildon.

It also told the marathon world who’s ready to be the daddy of ‘em all.

Eamonn Martin explains how he won

“I’ve always looked at myself as the greatest fun runner in the country because I really do enjoy running,” said Martin, who declined to place his London victory above other milestones in his career such as his English Schools junior triumph 20 years earlier and his two National cross country titles as a senior in 1984 and 1992.

“The plan was to go with the leaders and I had the courage to go with it whatever the pace. But I had no plan to attack in the second half. I was a bit worried about how good I would feel in a couple of miles’ time if I took off.

“At around 14 to 16 miles I didn’t feel great. I have read so many books about marathon runners because I wanted to find out about the pain and anguish they’ve suffered. I didn’t feel really bad when I had my ‘patch’ and I came through it relatively quickly and felt good again.

“I felt the wind blowing but it didn’t bother me at all. I was hoping it would not be too hot for my first marathon and the breeze actually cooled me nicely from time to time.

“Most of the last four miles were into the wind and I was happy to hedge my bets that I could out-sprint the Mexican guy.

“I looked around quite a few times because I didn’t want a third person to come into the equation.

“I just could not believe how many people were shouting for me out on the course. If there were a million out there, half a million were shouting my name. I was amazing. I have run in some of the great arenas. I’ve won in Oslo and Turin. I never thought a road race would simulate a big track meeting, but London does.

“There was a colossal noise on Westminster Bridge. It was incredible. I had to take care not to get too carried away.

“I saw the 26-mile marker and thought ‘that’s one lap of the track to go’. But I didn’t want to kick all that way although if he had gone I would have covered it.

“I was trying to relate it to a finish in a track race. I went with 250 yards to go. I didn’t know what his sprinting speed is like. I knew my sprinting speed was good.”

Martin’s answer to those who believed he was too old? “Yes, I agree with them. There are always people who break rules. I saw Jimmy Connors playing top-class tennis at 40.

“I’ve moved up through the ranges and I’m a fresh 34-year-old marathon runner. I said three or four years ago that in the spring of 1993 I would run my first marathon.

“Everybody ages differently. You talk about running at an age rather than with a spirit. I run with a bit of spirit, you know.”

Martin’s coach, Batty, added: “Eamonn doesn’t have a shoe deal at the moment as his agreement with Brooks ran out last year. I was negotiating with other companies but no one wanted to know him and one said he was too old.

“They have egg on their faces now as he has proved them wrong.”

Report by Trevor Frecknall, who sadly died in 2017