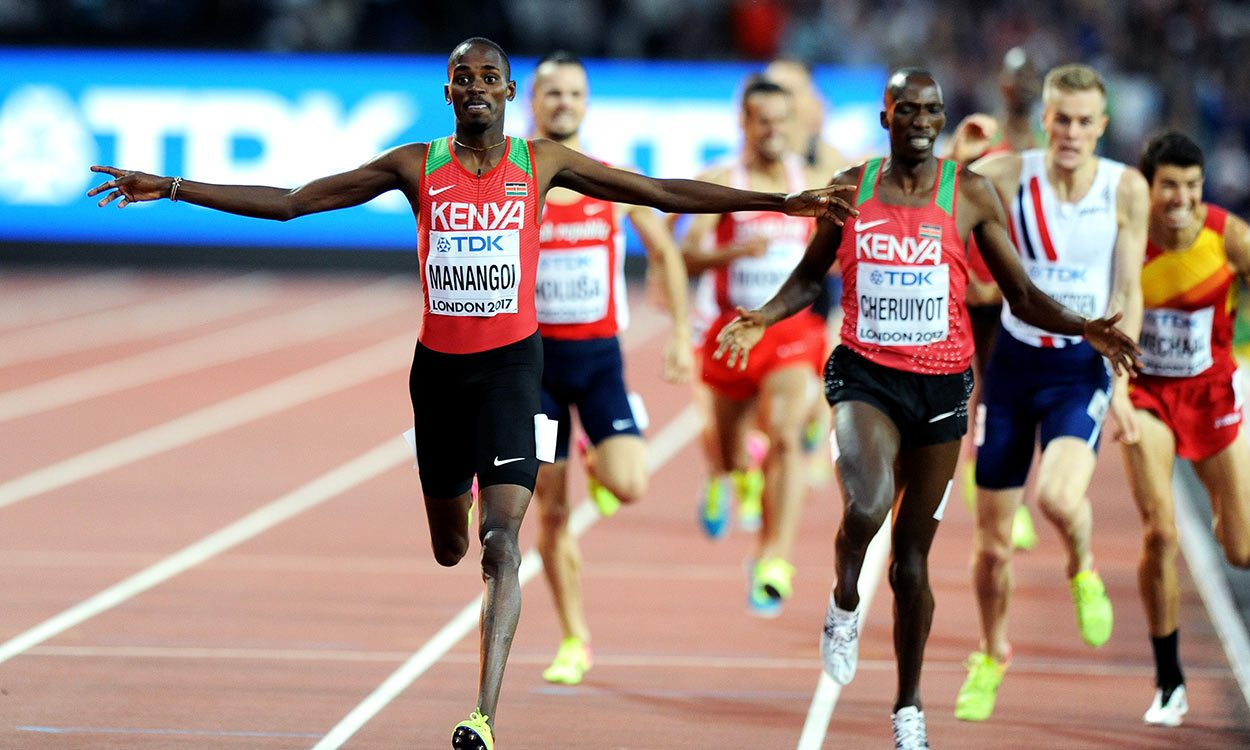 Kenya on top as Filip Ingebrigtsen bags a surprise bronze

Like the earlier women’s 5000m, this race started slow but finished very quickly.

The first lap was a a pedestrian 61.63 but then sub-3:30 man Timothy Cheruiyot kicked in a vicious 55.96 second lap which initially took him and team-mate world-leader Elijah Manangoi away from the rest. The 800m time was 1:57.09.

Three-time champion Asbel Kiprop, who had been languishing at the back, burst through and caught them. Also making his way through the field was Norwegian Filip Ingebrigtsen and he was up to fourth a second back on the three Kenyans at 800m in 1:59.04.

On the final bend, Kiprop faded and it was down to four.

“It was just such a good race and I’m so pleased to be a world champion,” said the winner, whose brother George recently won the world under-18 title. “I had a difficult race as Timothy (Cheruiyot) raced very well but I had that extra strength.

“We have had very good champions in the event over the years so it is a proud moment for me to win this title for my country. I knew I was in pretty good form and thought I could make the podium but to win this gold is wonderful.”

After making the race, Cheruiyot deservedly eased away for second in 3:33.99.

It was close for third with Ingebrigtsen having a battle for bronze and the honour of being top European. With Mechaal trying to pass him on the inside with little room, he actually propelled the Norwegian across the line. Ingebrigtsen timed 3:34.53 to Mechaal’s 3:34.71.

The fastest finisher was another European, Jakub Holusa, who had looked so impressive in his semi-final. The Czech athlete ran 39.06 for his last 300m and fell a few metres short of his fellow Europeans in 3:34.89.

Britain’s Chris O’Hare had been 12th in Moscow in 2013 and hopes were high he could finish much higher after winning at the stadium in the Anniversary Games.

“The first lap was fine, I knew they were going to hit it at some point, so I was waiting for it,” said the Briton. “They went and I thought – here we go, the race is on.

“I felt good and the plan was to stay comfortable. But that third lap was just horrible for me and I was stuck in a horrible cadence, a horrible tempo. It was just rubbish.

“I know I am so much better than last place today. It’s hard to process at the moment as I haven’t seen it. All I know is I wasn’t good enough today and it’s tough to take.”

It’s worth noting that O’Hare had beaten Ingebrigtsen into third in London last month and also when Jake Wightman won the Oslo Diamond League 1500m, second was Manangoi, third was Marcel Lewandowki who was seventh here and Ingebrigtsen was fourth. Wightman failed to make the final here and it appeared both Britons peaked too early in the season.