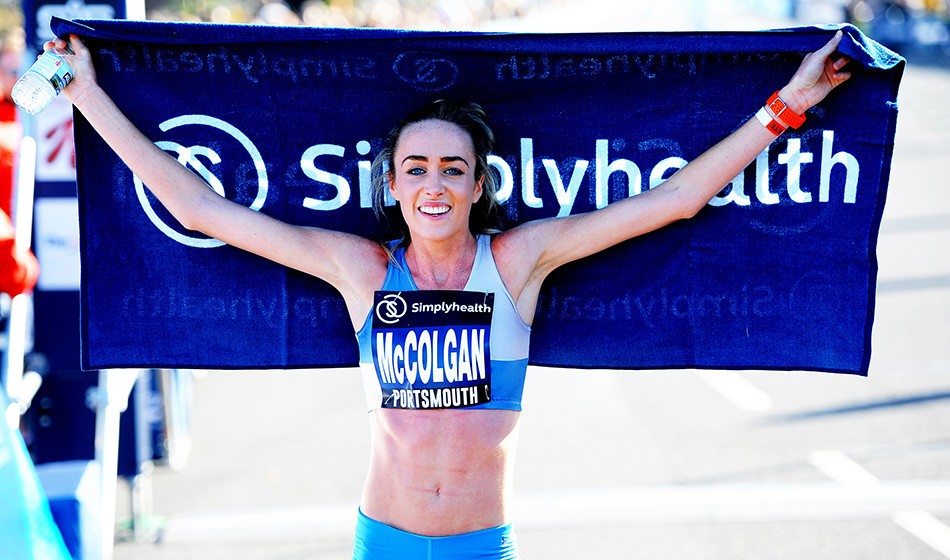 Defending champion hopes to become a two-time winner like her mother, Liz McColgan, while Chris Thompson targets a record fourth title in Portsmouth

As she heads into Sunday’s Simplyhealth Great South Run feeling in her best ever shape, Eilish McColgan hopes to emulate her mum and coach, 1991 world 10,000m champion Liz, and become a two-time winner, while the 28-year-old also has an eye on her mum’s Scottish record.

A number of other fine performances have followed and the world finalist, who improved her own Scottish 5000m record with a time of 14:46.17 to place 10th in Doha just two weeks ago, hopes to cap a successful year by retaining her 10-mile title at the 30th edition of the famous race on the south coast.

“Training has been going really, really well. I’m a little bit gutted the season is coming to an end, to be honest, because I’m in by far the best shape of my life so I want to make the most of it. It would be nice to end the season on a high.

“It’s insane,” she adds, on the prospect of emulating her mum. “When I look at my mum’s achievements, certainly on the road, it’s cool to feel like I’m going round and doing the same races as her.

“I’d love to try and run a fast time here. I feel like I’m in good shape, there’s no reason why not. If the weather permits me, if there’s not a big breeze on that final two-mile stretch, I feel confident that I can maybe get close to my mum’s time, maybe even break it. That would be a huge goal for me.”

Another former winner joining Eilish on the start line on Sunday will be 2017 champion Gemma Steel, who warmed up for the Portsmouth event by winning the Bank of Scotland Great Scottish Run 10km at the end of last month.

Aly Dixon has also experienced recent success, having broken two world records in the space of eight days, and she drops down in distance to race over 10 miles.

First the Olympic marathoner won the world 50km title in a record time of 3:07:20 on her ultra running debut and then she broke the Guinness World Record for the fastest superhero to run a half-marathon, clocking 78:26 at the Simplyhealth Great North Run when dressed as Wonder Woman.

Joining the trio in a domestic elite women’s field will be the likes of Cardiff’s Jenny Nesbitt, who races over the distance for the first time following recent podium finishes at the Cardiff and Swansea Bay 10km races and Cardiff Cross Challenge, plus Winchester’s Louise Damen, Bedford’s Rebecca Murray and Swansea’s Verity Ockenden.

The 2010 European 10,000m silver medallist enjoyed an impressive return to form in 2018 after years of injury struggles and his third win in Portsmouth in 46:56 was an official 10-mile PB (though he has gone quicker during a half-marathon) despite the 38-year-old having been in heavy training for the TCS New York City Marathon.

After a win at the Great East Run half-marathon and a seventh-place finish at the Great Scottish Run last month, Thompson will again look to see off the challenge of his club-mate Andy Vernon, who had to settle for second place when the two athletes battled in Portsmouth 12 months ago.

Vernon had also been working towards a marathon then, with a debut in London in his sights, but he was forced to withdraw due to injury.

This weekend he is set to return to racing for the first time since the Great Manchester Run and London 10,000 in May as he works towards a debut 26.2-miler in New York.

The pair are joined in the largely domestic elite men’s field by Ben Connor and Marc Scott who, like McColgan, were both representing GB in the 5000m at the IAAF World Championships in Qatar.

British 10,000m champion Connor was third at the 2017 Great South Run, when he set his PB of 48:36, while Scott races the distance for the first time after strong recent performances to win at the Cardiff Cross Challenge and clocking the quickest leg at the English National Road Relays.

The field also features Olympic marathoner Scott Overall and 2017 English National and Inter-Counties cross country runner-up Alex Teuten, who makes a trip along the coast with his Southampton club-mate Mahamed Mahamed, plus European under-23 10,000m bronze medallist Emile Cairess, who is said to be targeting the British under-23 10-mile record of 47:50.

Entries for the 30th edition of the event have sold out, with more than 20,000 runners taking to the start line on Clarence Esplanade across the weekend, with a 5km race and junior events also being held.

» The Simplyhealth Great South Run is set to be televised live on Channel 5 on Sunday from 10am. See greatrun.org/south