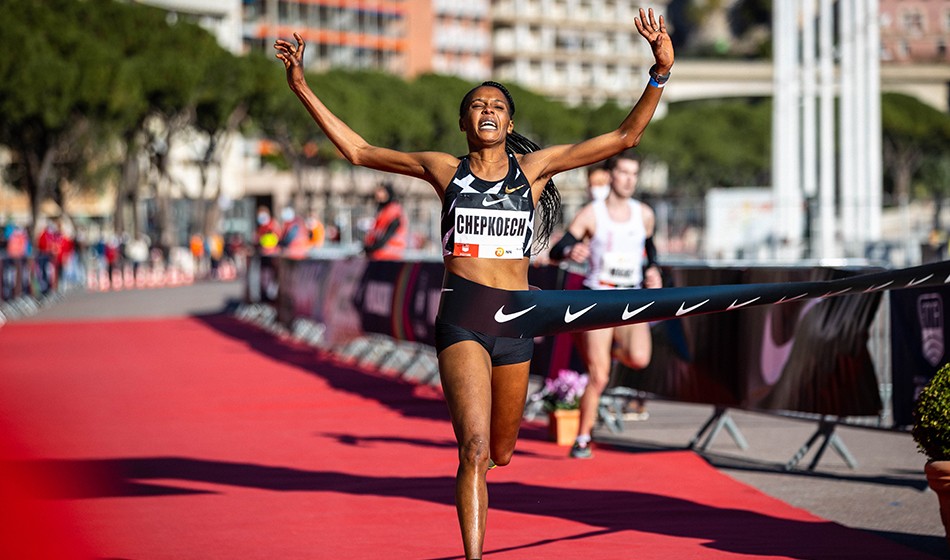 World steeplechase record-holder sets another global mark with 14:43 at the Monaco Run, while Joshua Cheptegei clocks 13:14

Back racing in Monaco, where she made steeplechase history in 2018, Beatrice Chepkoech added another world record to her CV as she improved the global women’s 5km mark to 14:43.

Racing in sunny, cool and blustery conditions, the Kenyan shaved one second from Sifan Hassan’s outright official world record also set in Monaco in a women-only race in 2019.

Chepkoech was paced by Netherlands’ Luuk Maas and the previous record in a mixed gender race was Caroline Kipkirui’s 14:48 set in 2018. The road 5km became an official world record event in 2017.

“It was so good,” said Chepkoech, who ran 8:44.32 to break the world 3000m steeplechase record in 2018. “Even though there was a lot of wind, I tried to follow my pacemaker and everything was perfect.

“The first kilometre was so fast but the second was a bit slower but then when we were coming back the wind was not as strong so I tried to push before we reached the [Larvotto] tunnel.

“When we were inside the tunnel my pacemaker told me ‘we can do it, let’s just push it’. I just followed him.

“I am so happy [with the time] because I didn’t expect it.”

There had been some confusion during the race as after Chepkoech passed 1km in around 2:57 the cameras focused on Meraf Bahta, running solo in second place. But the Kenyan world steeplechase champion remained on world record pace and the cameras captured her crossing the finish line with 14:40 on the clock before her time was confirmed as a world record 14:43.

She will next race at the Copernicus Cup in Torun, Poland, on February 17.

The men’s world record had been broken by Joshua Cheptegei at this event last year and the Ugandan world champion returned to defend his title.

While his record was not under threat this time, he claimed victory once again by clocking 13:14 ahead of Kenya’s Bethwell Birgen with 13:18 on his road racing debut. 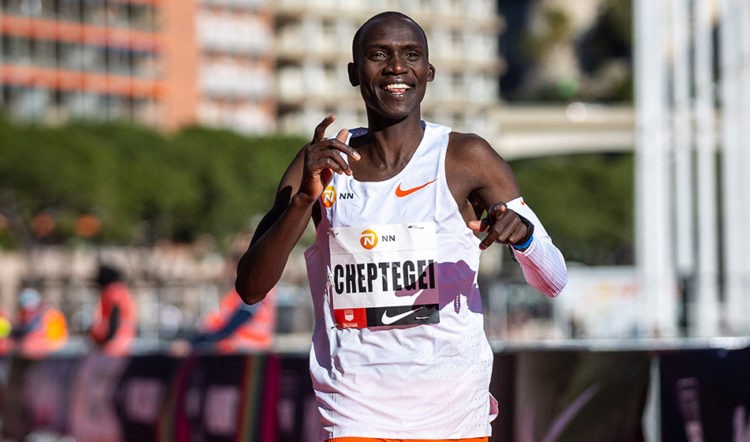 Kenya’s Davis Kiplangat was third with 13:19 and France’s Morhad Amdouni fourth with 13:20. Richard Douma broke the Dutch record with 13:24 in fifth.

“It was a good race but the wind was incredibly difficult,” said Cheptegei, who explained how he had spent one month preparing for the race following a break after the World Half Marathon Championships in October. Before that he had also broken the world 5000m record in Monaco with 12:35.36 in August.

“I just wanted to run and defend the title.”

Asked by Britain’s former world marathon record-holder Paula Radcliffe, who was commentating on the race alongside two-time Olympic champion Seb Coe, about his ambitions for the rest of the year and the Tokyo Olympics, Cheptegei added: “Tokyo is going to be a phenomenal challenge for me.

“I expect this year to become great like last year, or even more great than last year.”