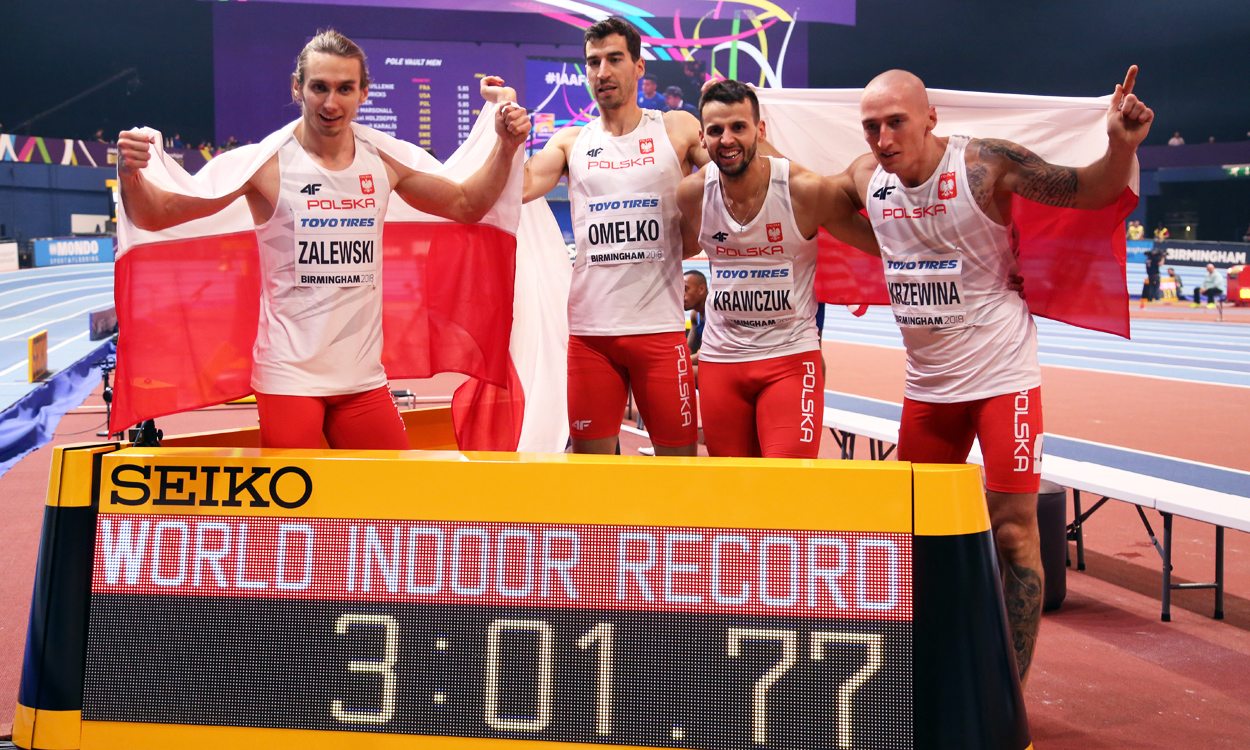 There was drama in the final track event of the IAAF World Indoor Championships when Poland passed the United States in the final metres to take gold in a world record of 3:01.77.

The US were runaway leaders and seemingly on their way to victory but Polish anchor runner  ran an inspired final leg as he stormed past American Vernon Norwood to win by two tenths of a second.

The United States’ time of 3:01.97 in second was also inside the previous world record of 3:02.13, set by a different US quartet at the IAAF World Indoor Championships in Sopot four years ago.

Belgium, meanwhile, took bronze in a national record of 3:02.51.

It was a great ending to the track action in Birmingham, although there was no joy for the host nation in this event as they finished sixth in 3:05.08.

The Americans led all the way until the dying metres with Fred Kerley, Michael Cherry and Aldrich Bailey on the first three legs as they cruised along at world record tempo.

But Poland’s Karol Zalewski, Rafal Omelko and Lukasz Krawczuk kept their country in contention before handing to Krzewina for the glory leg.

“It is a big shock and surprise for us,” said Omelko. “We were targeting the European record (Belgium’s 3:02.87) but really did not expect a result like this and never dreamed about the world record.

“The last lap with Jakub Krzewina was the crucial one. He pushed it so hard and he is very strong this year.”

Ironically Krzewina was passed in the final stages by Kevin Borlee when Belgium set their European record at the 2015 European Indoor Championships in Prague. But in Birmingham last Sunday the Pole had the momentum over his rivals.

The American team were naturally disappointed, with Cherry saying: “We’re not really happy to have only got a silver but it’s a real blessing for us all to come out here and compete healthy,” while Norwood added: “The team did a great job, but no comment on my last leg.”

For Britain, the little-known team of Owen Smith, Grant Prenderleith, Jamal Rhoden-Stevens and Lee Thompson will have gained good experience for future.

Plenderleith said: “It was good to bring it today. We all know each other from racing indoors for the previous couple of seasons and we already had the bond there that you have with your team-mates. It’s good experience ahead of Glasgow next year.”

Rhoden-Stevens said: “We feel a bit disappointed because we know we could have done a bit better, but to be fair our opponents were on fire today and there is nothing you can do about that.

“We are a young British team but we are hungry, we want to contest the final instead of just being in the final.”

Thompson added: “Hopefully we can run some more races together and the times will just drop and drop. We have put the hard work in individually so if we put that together we can be a world class team like the Polish team. We want to break records like they did, we just want to contest for medals and I believe we have the ability to do so in future years.”

» Full coverage in the March 8 issue of Athletics Weekly