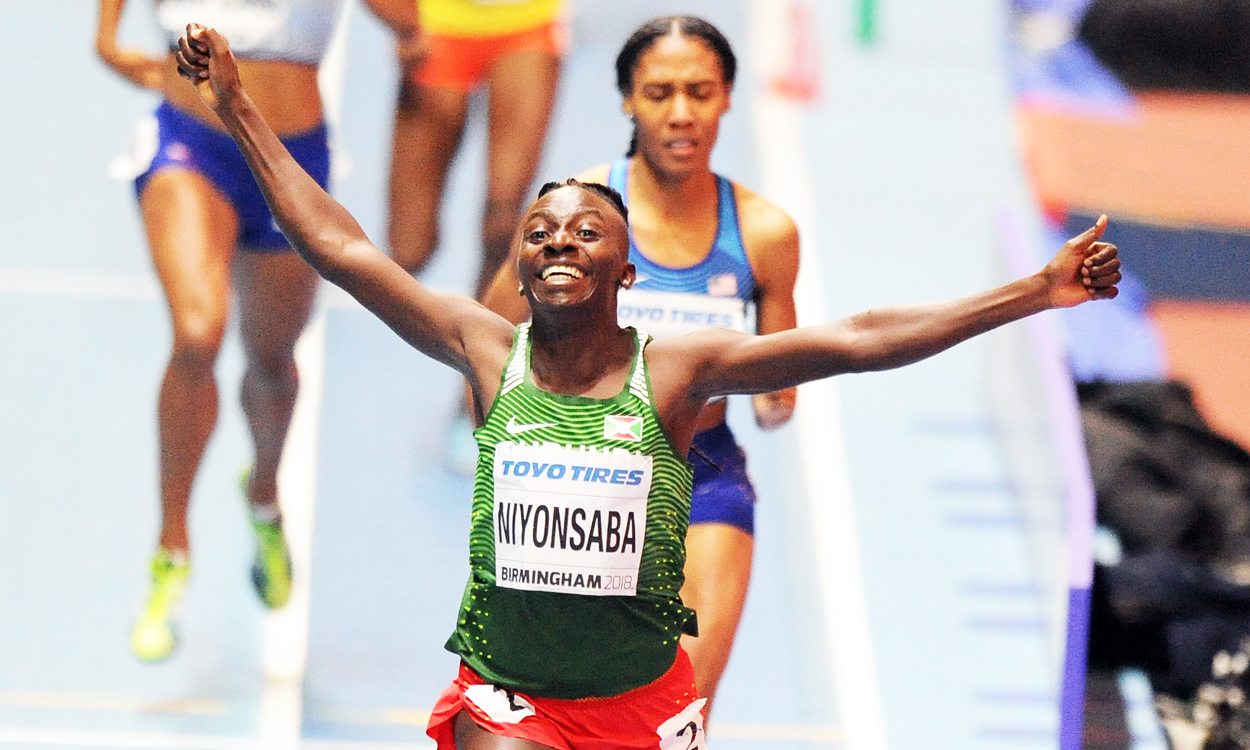 Francine Niyonsaba successfully defended her world indoor 800m title in Birmingham on Sunday as she beat Ajee Wilson of the United States and Shelayna Oskan-Clarke of Great Britain to gold.

Behind, Oskan-Clarke ran an indoor PB of 1:59.81 as she backed up the European indoor silver she won in Belgrade 12 months ago.

Later this month the 28-year-old Briton heads to the Commonwealth Games in Australia aiming to win another medal.

Niyonsaba, who won silver medals at the Rio Olympics and 2017 IAAF World Championships in London, said: “I did all I was supposed to do to defend this title despite the fact it was not easy. I did it for god and for my country.

“I knew Ajee was well prepared. I started as I planned, it was hard to win but I felt good to push it in the finish.”

Oskan-Clarke said: “I’m so happy to get a medal. That’s what I came here to do. I wanted to get through to the final and then focus on that. The race was a bit scrappy for me, but I dug deep.

“Normally I don’t hear the crowd because I’m in the zone, but you can hear them roaring around all the way which helped me push a little deeper.”

Yomif Kejelcha is still only 20 years of age but he successfully defended his 3000m title with surprising ease.

The long-legged Ethiopian won with exceptional finishing speed – 2:22.70 for the final kilometre – but the overall time was mediocre and the 8:14.41 now replaces Frank O’Mara’s 1987 mark as the slowest winning time in history.

Mechaal stretched out a little but halfway was still an embarrassing 4:31.

Kejelcha was the first to make the pace a little more respectable and he led through 2000m in 5:51.71, having taken 2:43 for that second kilometre.

A 26.81 final circuit gave the Ethiopian gold – their seventh in this event.

It’s worth noting the second half was completed in 3:43 – a whole 48 seconds quicker than the first!

Kejelcha said: “I’m very happy to be the world indoor champion once again. During the race I was the one controlling everybody. When I pushed I was able to show off my power. Before I had a problem with my speed in the last few laps and I couldn’t control the race but I’ve been training a lot on that and now I’m very good with my kick at the end. Next year I want to break the 5000m world record.”

Selemon Barega, who has won world junior and world youth titles the previous two years, won a world senior medal at the age of 18.

Third place went to Bethwell Birgen, who only made the final as a fastest loser and he won Kenya’s first medal of the championships. He denied Hagos Gebrhiwet by just six hundredths of a second and that would have been the first ever Ethiopian clean sweep in an event that previously only two athletes contested.

The men’s 1500m saw Ethiopia win their fourth gold in the 1500m and 3000m after Dibaba’s women’s double and there was another record of sorts – yet again the slowest ever world indoor 1500m final.

Gold, in a race that was instantly forgettable, went to another young Ethiopian. Samuel Tefera is officially only 18 and took the world junior silver medal in 2016.

The next lap was a much quicker 25.31 but Iguider could not stop Tefera and then European indoor champion Marcel Lewandowski passing him on that last lap.

Tefera’s last 300m was 38.6, which again, given the earlier jog, was not that noteworthy for a gold medal performance. The last 800m was only around 1:50.

After the race, he said: “The race was very slow early on. It was very tactical and that wasn’t good for me, but in the last two laps I was able to use my power to win.”

Jake Wightman, who had looked sharp in winning his heat, stayed at the back initially and got in a good position to challenge for a medal but the race did not make the most of his strength and he faded to sixth in 3:58.91, which was only five metres down on the gold medallist.

Wightman said: “I’m a bit gutted, I was hoping to be in contention. It was always going to be anybody’s race but I didn’t get it right today. I left myself too much to do and surged at the wrong point so it’s not a very pleasing day for me.”

He said: “It’s been a tough last 24 hours. Yesterday lying under the MRI thinking ‘I hope it’s clear so I can run … but what am I going to do if I can run!? Just the form wasn’t there.

“You can’t come into a champs like this, not fully prepared, and I wasn’t.”