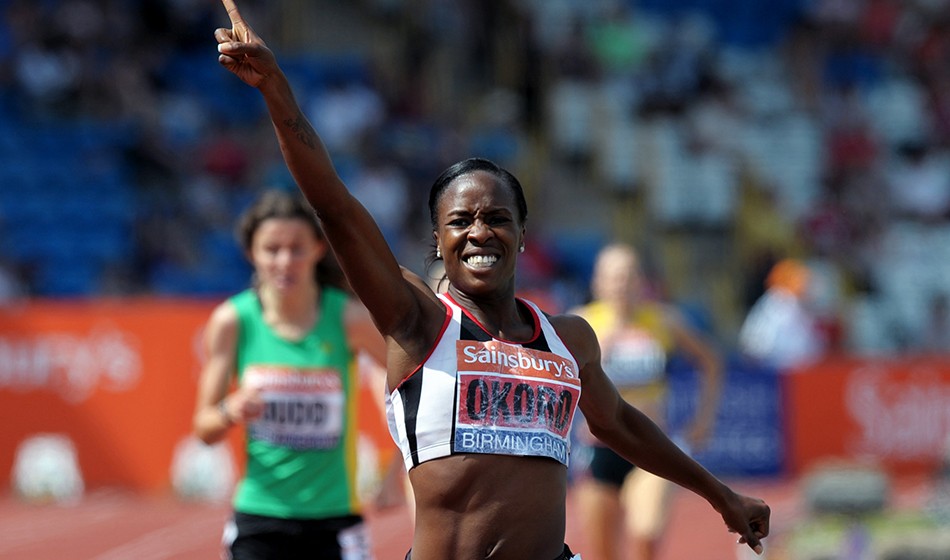 The Olympic, world and European medallist opens up on the athletics-life balance and how she is supporting other athletes who may be finding things hard

Marilyn Okoro says her own experiences in the sport have led her to create support groups for athletes in areas such as sponsorship and transition, to help them avoid the same “impossible” situation in which she currently finds herself.

The Olympic, world and European medallist had been hoping to target the postponed Tokyo Olympic Games but is simply too tired to train to the required intensity, exhausted from trying to balance her job and life with athletics.

She is now working with Brand You:Sport, which specialises in elite sport career transition, and has launched a crisis fund ‘ATHLETE FUNDamentals’, which aims to support athletes with living and training costs.

“My situation now is actually impossible,” explains 800m specialist Okoro, who has claimed multiple major medals as part of the British 4x400m squad.

“Half of it is deciding ‘do I walk away now and throw myself into not feeling this anxiety every day or can I push through this?’ And what I am learning, hopefully there will be a framework for all the other athletes that are feeling the same.

“People aren’t aware, they just assume,” adds the 36-year-old, who now works in crisis management. “At work all the time people are like ‘oh my god, you’re an Olympic bronze medallist, what are you doing here?’

“I do love the work I do, but I’m in two minds because I really, really want to be training and preparing – I’ve been given this amazing opportunity, when is an Olympics postponed? And also I wanted to retire on my terms but it’s looking like… my body is exhausted because it’s unrealistic to work a 12-hour shift and then expect to have the same intensity and then obviously life is uncertain at the moment.”

“I do love the work I do, but I’m in two minds because I really, really want to be training and preparing”

Reflecting on her own journey, having been self-funded since 2012, Okoro adds: “Probably a lot of it stems from 2012 – that was my first real traumatic year in sport.

“That was the year of the controversial non-selection [for the London Olympics]. It was a really difficult year, being introduced to the politics of sport. As an athlete, you just beat yourself up. How it was handled and the structure of it all was really difficult to process and understand. Subsequently, I lost my funding. There was so much hanging on that and I think that has affected me a lot more than I realised.

“I think some of the things that hurt me now is that when I look back on my career, I have achieved so much and I’m so thankful for what sport has given me, but I wasn’t always present, I wasn’t always enjoying it,” she continues. “It was always so pressurised that it was ‘life or death’ and that’s not how it should be.

“Winning and losing is all part of the sport and it’s how you respond to it, but for me it was only ‘I had to win’ but that pressure wasn’t from myself, it was from external factors.

“I think there’s always a purpose for any pain or adversity you go through. I see an amazing crop of athletes coming through and you can put yourself in their shoes and I don’t want any athlete to ever go through what I have been through the last seven years because it’s unnecessary.

“I think a lot more focus should have been on competing and racing rather than a lot of the stresses that could have been avoided with better planning and support.”

And that is what Okoro hopes to help change.

On the transition after an elite sports career, she says: “I’m doing research at the moment and setting up some focus groups, because I think there are a lot of companies that are trying to support athletes, rightly so, but I find they just think ‘okay the next thing you need is just a job’, which for a lot, yes, maybe jumping into that next career is what they are ready to do, but a lot of athletes aren’t.

“I think transition preparation should start a lot earlier. At the moment I’m trying to see what athletes actually need and obviously no two athletes are the same. I think essentially it is that time where nothing is going to fill 10, 15, in my case 20, years of what you’ve been doing – such highs and such lows.

“I think it is about working really intrinsically, it’s very 360, looking at the athlete as a whole. There’s a very holistic element, so it’s not about just networking and throwing them in a room with all these different CEOs and managers because even that culture is something that we are not really used to.

“I have learned a lot applying for jobs lately and my CV has completely transformed because the things that I know and I am so proud of, those are the things you chuck at the top and actually looking at the roles I have been applying for, it’s like ‘okay, that is actually going to have to go right to the bottom’. So basic things like that, learning how to structure your covering letter, practical things and just life skills as well.

“I think one of the things that you’re not taught as an athlete is budgeting,” she adds. “Especially when you’re getting such unstable and uncertain income, it’s a huge thing. For me, a lot of my mental health has been triggered by instability and insecurity financially and not being financially astute. I think what the main frustration is that so many athletes are going through the same thing and nothing is really being done about it.

“At the moment I’m doing a lot of networking. Brand You:Sport we want to get off the ground and perhaps talk to brands and see how they can get involved as well in helping these athletes.

“A lot of them won’t be retiring any time soon but it’s about preparing for that day, when they choose to, and a lot more athletes being able to retire on their terms, not just when their body gives up or when they run out of funds.”

Further information about Brand You:Sport can be found at brandyousport.com

Okoro is also currently appealing to individuals, brands and businesses to come forward as sponsors of ATHLETE FUNDamentals, which aims to support athletes aged 24+, who meet the criteria, with living and training costs. Email [email protected] for details.

» See the November edition of AW magazine, which can be ordered here, for more on athlete welfare, including an interview with two-time Olympic triple jump champion Christian Taylor, president of The Athletics Association