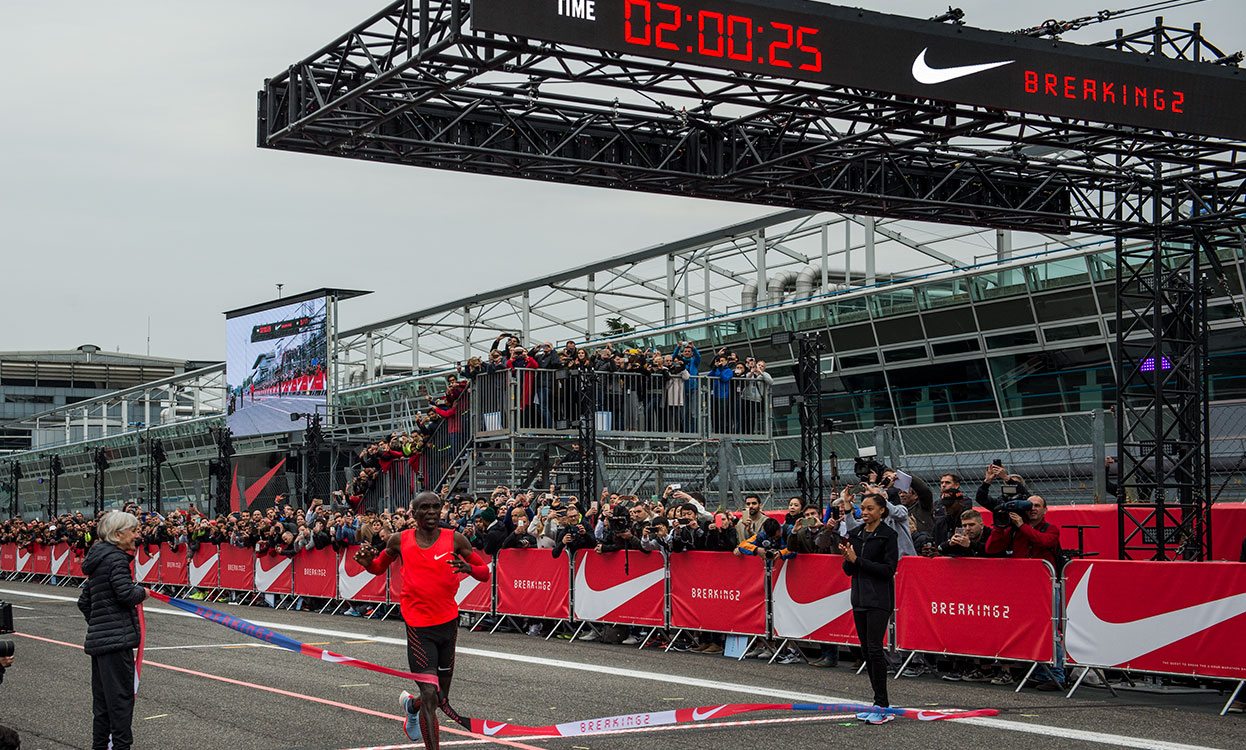 The Olympic champion’s time won’t count as an official world record, but goes some way to further proving what the human body is capable of

Showing remarkable strength both in body and mind, Eliud Kipchoge proved on Saturday morning that a sub-two-hour marathon might be a lot closer than some may have originally thought.

Clocking 2:00:25 for 26.2 miles in a controversial ‘Breaking2’ event organised by sportswear giant Nike in an attempt to breach the barrier, the Olympic champion further reinforced his position as arguably the finest marathon runner of all time.

While Kipchoge’s time, set on a Formula One track in Monza in Italy, won’t count as an official world record, it does go some way to further proving what the human body is capable of.

The 32-year-old Kenyan has an official marathon PB of 2:03:05, set when winning his second London Marathon title last year. The fact that the sub-two-hour attempt included the use of pacers being subbed in and out is among the reasons why his new best time isn’t eligible for record purposes but it is an incredible two minutes and 32 seconds faster than the official world record mark set by Kipchoge’s countryman Dennis Kimetto in Berlin in 2014.

“I believe in good preparation and good planning. If you have that then those 25 seconds will come.”

Every element of the attempt had been meticulously planned, from the time of day the run took place (05:45 local time) to the 2.4km loop course and the team of runners, which also included Eritrea’s Zersenay Tadese and Ethiopia’s Lelisa Desisa as well as the army of pacers.

Then there’s the shoes – the new Nike Zoom Vaporfly Elite worn by athletes during the attempt. The footwear features a full-length plate “to increase stiffness and provide a propulsion sensation”. ‘Breaking2’ had generated mixed reaction in the lead-up and while there was certainly a corporate feel to it, nothing can be taken away from Kipchoge’s impressive achievement.

Starting out toward the back of an arrow formation of pacers, Kipchoge was joined by world half-marathon record-holder Tadese and two-time Boston Marathon winner Desisa.

Their first 5km split was timed at 14:14 as they aimed for 14:10, but the group picked up the pace soon afterwards and there was a projected finish time of 1:59:56 at that point.

Not long after this, the attempt relied on Kipchoge alone, with Desisa having dropped off the pace just after 15km and Tadese losing touch after 21km.

Kipchoge averaged around 4:36 per mile, with around 4:34.5 needed to dip under two hours.

As USA’s Olympic medallist Shalane Flanagan expressed with the end of the attempt in sight: “With each step Eliud Kipchoge is taking, he is making history.”

On the day that marked the 63rd anniversary of Sir Roger Bannister’s first ever sub-four-minute mile, this was a barrier that could not be broken, but it remains a target for another time.

“I can say it is possible for a human to run under the two-hour mark,” said Kipchoge. “This journey has been good. It has been hard. It has taken seven good months of preparation but I am happy to have done that. I think this is history.”

» You can read more on the Breaking2 attempt here, while a blog post by AW’s editor on why a sub-two-hour marathon is not an impossible dream can be found here