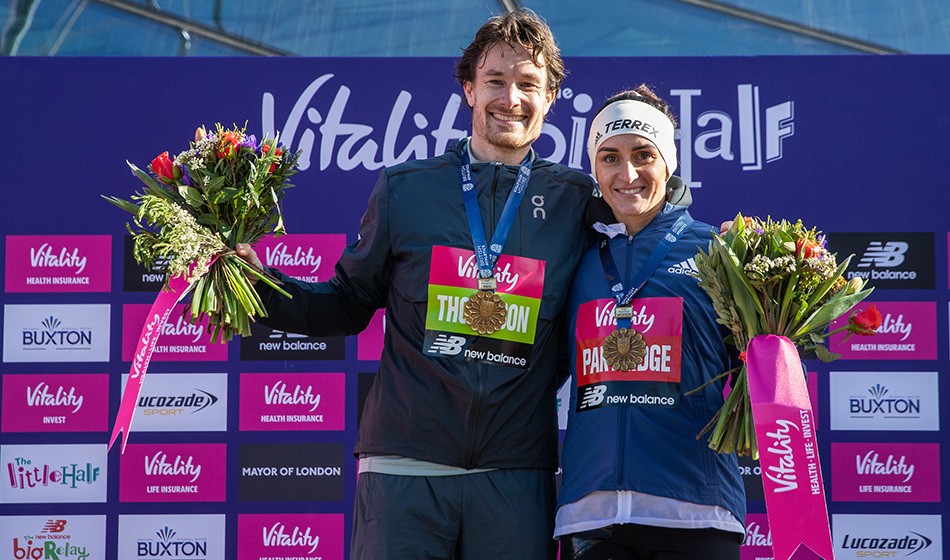 British champions feature on the 10-strong squad for the World Athletics Half Marathon Championships in Gdynia, Poland

Chris Thompson and Lily Partridge lead a full British team of 10 for the World Athletics Half Marathon Championships in Gdynia, Poland, on March 29.

The Alan Storey-coached athletes both won British titles in London over the weekend, with Thompson finishing second behind Ethiopia’s Kenenisa Bekele in The Vitality Big Half, which incorporated the UK trials for the World Half, while Partridge claimed women’s race victory.

Thompson, the 2010 European 10,000m silver medallist, came close to his 2012 PB with his runner-up time of 61:07, with the performance earning the 38-year-old his first British vest on the road, 22 years after he made his international track debut at the World Junior Championships.

Fresh from lowering his British under-23 half-marathon record to 62:00 in London, Jake Smith joins Thompson in representing GB on the roads for the first time, having made his British track debut at last year’s European Under-23 Championships in Gävle, Sweden.

Ross Millington and Mohamud Aadan finished third and fourth respectively in the British trial race but declined selection for the championship, so other Gdynia-bound athletes are 2017 British marathon champion Josh Griffiths, Doha world championships representative Ben Connor and Matt Leach, who has twice run for Britain in the European 10,000m Cup.

On the women’s side, Partridge earns her first British vest since the 2018 European Championships in Berlin and will be joined by Samantha Harrison and Stephanie Davis, who also made the Big Half podium in London after respective personal bests of 71:01 and 71:15. They will make their international debuts.

Big Half fourth-placer Hayley Carruthers also earns her first British vest and completing the team is Sarah Inglis, who did not race at the trials but moved to 13th on the UK all-time list with a strong run of 70:24 in Houston in January.

“The full squad of 10 for the World Athletics Half Marathon Championships in Gdynia showcases some of Great Britain’s most in-form athletes over the distance, exemplified by the performances at the trials and the form we have seen already this season,” said team leader Chris Jones.

“The team we have selected shows a good range of previous British international experience and features new names to the international scene and I hope this strength will be reflected in the overall outcome.

“The championships will serve as an excellent opportunity for athletes to continue their upward trajectory on the roads and I hope that we can achieve a strong team position overall.”

British team selected for the World Athletics Half Marathon Championships