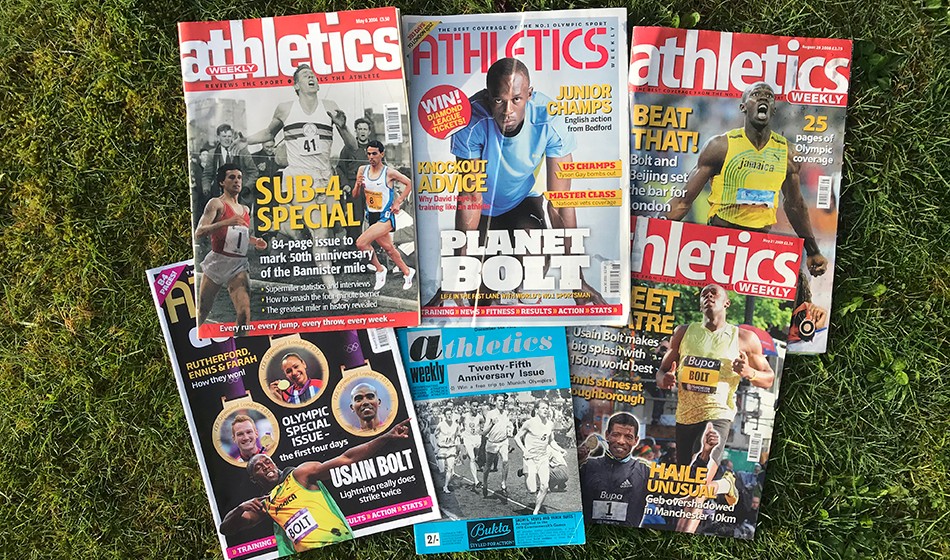 At an interview at St Mary’s University in south-west London in 2011, Usain Bolt was shown the AW coverage of the 2002 World Junior Championships, where he made a name for himself nine years earlier by winning the 200m on home soil in Jamaica.

The UK-based magazine sent its long-time photographer Mark Shearman plus news editor Steve Landells to cover the event and when Bolt saw the coverage his eyes lit up and he politely asked if he could have the issue as a keepsake.

Ironically the big story for AW at those 2002 championships due to its natural British bias was in the under-20 women’s 200m. Vernicha James struck Britain’s only gold of the championships by beating home hope Anneisha McLaughlin of Jamaica and Sanya Richards of the United States. But while James drifted away from athletics, the under-20 men’s winner Bolt, who was only 15 at the time, was destined for greatness.

Of course Bolt’s performances at those 2002 championships in Kingston would have been covered extensively by Caribbean media at the time. But few non-Jamaican publications would have sent staff to report on one of his first big teenage triumphs.

We continued to follow his career live, too, at the following year’s World Youth Champs in Canada – and all of his major championship races since as he has appeared as the main image on our front cover a total of 30 times. 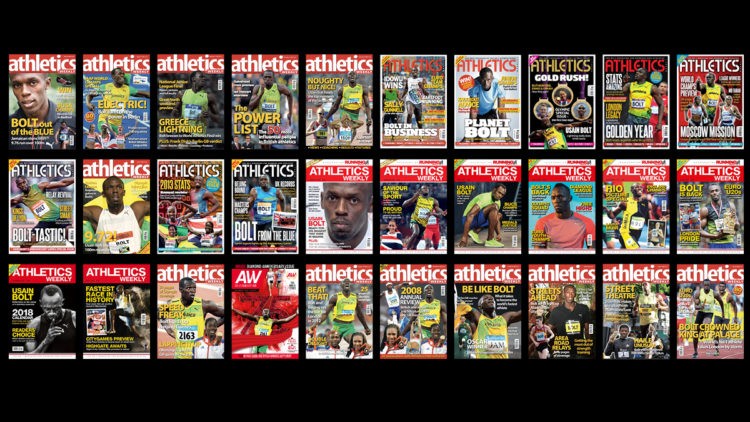 Demonstrating the magazine’s widespread support from the athletics community, the great man himself even remarked on the milestone.

“I would like to congratulate Athletics Weekly on their 75 years anniversary,” said Bolt. “They were in Kingston, Jamaica, for my first big victory at the World Junior Championships in 2002 and every other championship in my career.

“I am honoured to have been on the cover 30 times. Best wishes for another 75 years covering the sport.”

Of course, Bolt is not alone. For 75 years AW has covered the early strides of the world’s greatest athletes. When the magazine was created in December 1945 the first athletes we wrote about were the Swedish middle-distance record-breakers Gunder Hägg and Arne Andersson, plus British endurance running legend Jack Holden.

Alan Turing, the maths genius credited with inventing the early computer, was listed in the September 1946 issue of AW winning the Walton AC three miles title. The following year he placed fifth in the AAA marathon before eventually being immortalised in the movie The Imitation Game.

» Gordon Pirie – the enigmatic and popular distance runner was listed in AW as early as November 1946 when, aged 15, he competed in a South London Harriers five miles race.

» Roger Bannister – eight years before he ran the first sub-four-minute mile, AW printed his result in December 1946 finishing runner-up in an Oxford vs Cambridge ‘freshmen’s sports’ mile in 4:53 aged 17.

» Mary Peters – seven years before winning Olympic pentathlon gold, she was listed in the August 27, 1955, issue after taking bronze in the Northern Ireland pentathlon championships.

» Allan Wells – the Moscow Olympics 100m champion in 1980 was in AW 10 years earlier after winning the Scottish triple jump title.

» Jessica Ennis – another athletics great whose early appearances in AW were modest, in the July 14, 1999, issue she was in the magazine finishing equal 10th in the English Schools high jump.

» Greg Rutherford – had a similarly inauspicious start, with the July 11, 2001, issue of AW including his fifth place in the English Schools long jump final.

» Alistair Brownlee – before becoming Olympic triathlon champion the Yorkshireman was a regular in AW and in March 2006 featured heavily in our English Schools Cross Country Champs coverage as one of the winners that day in Mansfield.

The lesson is clear. If you want to read about the champions of tomorrow, then read AW today. The magazine invariably covers their careers long before the wider media takes interest.

» Thanks to Mel Watman for help with statistics

From one GOAT to another 🐐