Ask The Athlete with Steve Cram 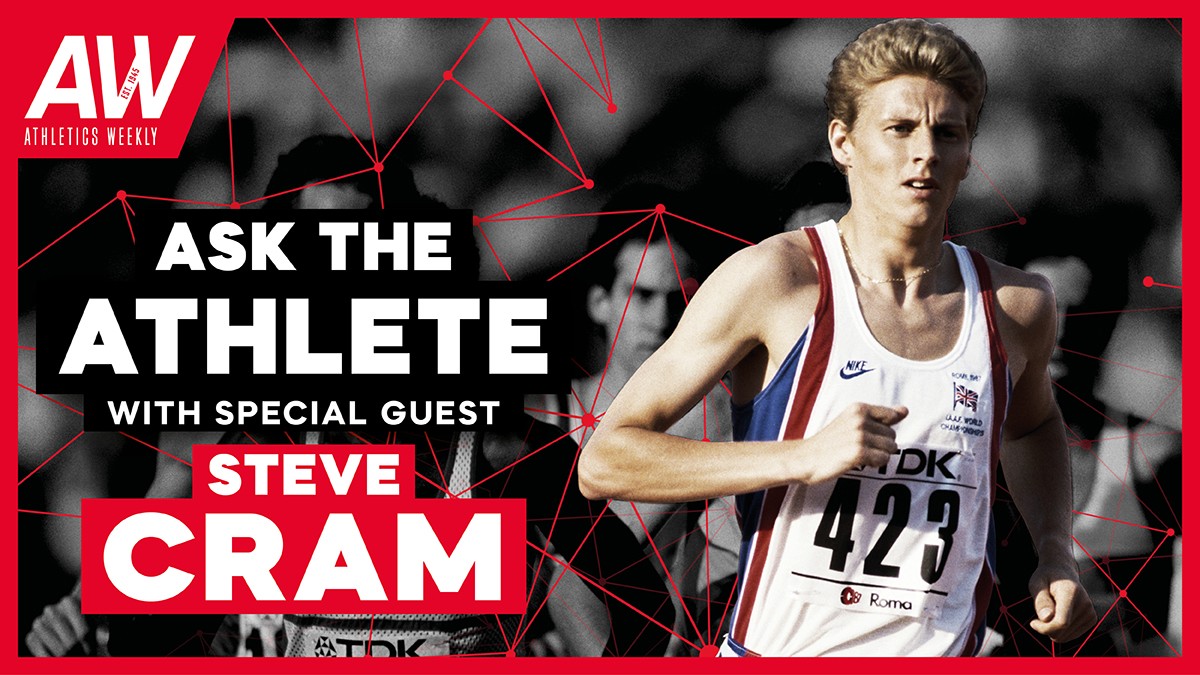 The British supermiler answers your questions on training, commentating and taking on Jakob Ingebrigtsen in a 1500m race

This week we are joined by Steve Cram – 1500m Olympic silver medallist, world and two-time European champion, commentator and coach.

He chats to AW about commentating on Usain Bolt, Mo Farah and Kelly Holmes, how he’d like to face Jakob Ingebrigtsen in a 1500m race, what advice he’d give to young athletes and so much more!

Plus all the information on his upcoming virtual training camp.

Have a read of some of Cram’s answers below and then enjoy the full 32-minute episode.

What are your favourite all-time moments as a commentator?

“There are lots, actually. I’ve been commentating for over 20 years now and I’ve actually forgotten an awful lot of stuff! If I had to pick out a few, I’d say in 2002 when Paula Radcliffe ran an incredible race in the European 10,000m in pouring rain in Munich and it was just outside 30 minutes. I remember how excited Bren [Brendan Foster] got watching that and it’s always good when you get a distance event where you get time to get into it.

“Kelly Holmes in 2004 was dramatic, crossing the line and just about winning the 800m. Tight finishes for commentary are brilliant and I love them.

“I think Usain Bolt was probably the one I enjoyed commentating on most as you just never knew what you were going to get with him. You kind of knew he was going to win but he ran so many brilliant times and world records. My favourite one with him was 200m in London.

“My favourite one was Mo Farah’s 10,000m in London. For the same reason I mentioned about Paula’s race, you can get into it, and that night in London came off the back of everything else that night [on Super Saturday]. It wasn’t just the race, it was the atmosphere in the stadium, the importance of it to the British viewers and us, so I’d say that probably just comes out on top. I still think 2012 and that Saturday night was number one!”

Which middle-distance athlete competing now would you like to have competed against during your period on the track?

“It depends if you want to beat them or get beat by them. I’d love to be running against Jakob Ingebrigtsen, I know the family reasonably well including their dad. The Norwegians have a strong bond back to what we were doing in the 1980s and as a family they’ve talked a lot about the big meetings in Oslo so they’ve got a good grounding in it. I always enjoyed chatting with them on the circuit and watching him, he’s a very aggressive runner and he’s got a good racing brain so he’s somebody I’d genuinely like to run against.”

“Short answer, no. On the second bit, when you’ve been a top class athlete and been training 20 years at that level, you know, I had 17 years as an international athlete, it’s a big physical effort and you carry that into the rest of your life. The high intensity of training is something you physically let go but it’s also the mental side, it’s an amazing world to be in but it can drain you for good and for bad. It’s nice to step out of that for a while.

“I also don’t have any desire. I’m only getting slower and that can be quite de-motivating and it took me a long time to figure out what I wanted to do with running. I ran a couple of marathons early on including Comrades Marathon which is 55 miles which was nice because I didn’t have anything to compare it to. But you can’t keep doing that and I didn’t have time because as soon as you do them you think I’m not going to get any faster after that.

“I’ve been running a fair bit more in the last year or so, partly because of lockdown, and I’m a little bit better in looking after myself now, especially in my legs, but could I break the world record for the mile? Last year I jokingly bet Ross Murray (those of you who listen to podcasts may remember Ross) and he said I couldn’t run a 5:40 mile. I think I ran 5:41 with Laura’s help. With a bit of track work I could knock 20 or 30 seconds off that but the world record, no. I’m also not putting myself in the masters category for those races as I’m nowhere near.”

What advice would you give people to help them become a world-class athlete like yourself?

“Start with some good genes, that helps! No, you know, look, there are so many people who think this is all about talent and ability and of course that helps but there’s a lot of people who do have talent but don’t go anywhere with it. It really is about that consistent approach to something. It takes 10 years of running to get to a place from the age of 13 or 14 to getting to 23 or 24 and then you might not even be at your best until a few years after that. Most people aren’t in it for the long journey. You’re going to get lots of knock-backs and hurdles along that journey.

“There are some absolute super-talented people out there like Usain Bolt but he still trained, went through the various steps from his junior career as there are no shortcuts, that’s the basic thing. Stick at it and if there’s nothing else you’ll be much better than you were before!”

Do you have plans to widen your coaching group to include more athletes?

“Not really, not necessarily. I’ve started coaching one of our top young athletes now you know, Laura [Weightman] is very well established, I’ve advised a few but in terms of direct coaching it’s only going to be about two or three.

“What I do enjoy though is that wider approach. I like taking that elite approach and using that for the masses so we’ve got these Steve Cram Training Camps. I’m always interested when people come on those, just ordinary runners, people just wanting to get a tiny bit better at 5km or 10km, or just coming for a social weekend, but they’re asking the questions the elite athletes ask.

“If you haven’t signed up already, February 27 we’re doing a virtual training camp with Athletics Weekly. There are still places available for that and you can discover what’s going on, virtually in your own front room, but you might think about coming to one of our future camps which hopefully might not be too far away!”

Click here to find out more about the Steve Cram Virtual Training Camp.