Ask The Athlete with Hannah Cockroft 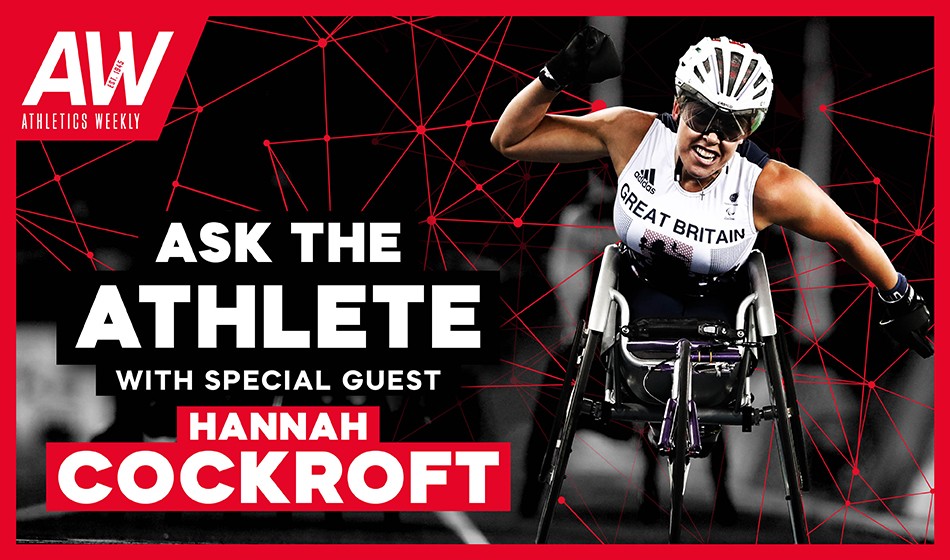 The five-time Paralympic champion answers your questions on London 2012, her inspirations, lockdown training and more

She chats to AW about winning gold in front of 80,000 fans at London 2012, training tips and her rivalry with Kare Adenegan, turning her garage into a home gym in lockdown and so much more!

Have a read of some of Cockroft’s answers below and then enjoy the full 18-minute episode.

Who is your biggest inspiration?

“So I think in the sport my biggest inspiration is a person called Chantal Petitclerc. Chantal I think is a 14-time Paralympic champion, she’s a Canadian wheelchair racer and we used to share a coach when I was under Peter Eriksson. I remember the first time I met Chantal, it was just before the London 2012 Paralympic Games, and you can probably tell I’m not a very shy person, but I remember hiding behind Peter and I was starstruck! There’s only two people I’ve met that I’ve been starstruck by and that’s Chantal and David Beckham.

“Inspiration now just comes from everywhere. I’m inspired by the girls that I race against, ultimately because they inspire me to train hard as I want to beat them! I’m also inspired by people that I just meet every day. Inspiration comes from anywhere you want it to come from.”

What was the London 2012 experience like? How was the atmosphere in the stadium?

“London 2012 was just unreal! It was amazing. I feel like any words you put it into don’t do it justice. It was just the absolute time of my life. If someone said to me on my last day of living, if you could go back to do one day again in life, I’d do any day in London!

“I feel like I can’t remember it that well and that the memories in my head are just the ones I’ve picked up from the media. I remember going to the stadium and going to compete on the warm up track abut 800m from the main stadium and I could hear this buzzing sound that was like a radio that hadn’t been tuned in that properly. So I said to Peter my coach: ‘Can you hear that? What is that noise, it’s really annoying me!’, and he said: ‘You should probably get used to that, it’s the crowd.’ Up until that point the biggest crowd I’d competed in front of was about 200 people so we went from 200 to 80,000 pretty quickly.

“We went through each call room and the final one was under the stadium on a little warm up track and it was so loud the floor was physically moving. Every other girl was white or green and I just couldn’t stop grinning and the cheer was the loudest thing I’ve ever heard. I love going to concerts and gigs but it had nothing on London 2012!”

Do you revel in being the one that people are chasing or can there be a lot of pressure associated with that?

“Definitely pressure. I do wish I had someone to chase. It’s not even the pressure, it’s just knowing what’s achievable. When you’re at the front, it’s so hard to break the barriers all the time and not really have anyone to push you to do that. Which I think is why I struggled to break the 17-second barrier for the 100m. Once Kare [Adenegan] had done it I did it pretty quickly after her but I needed someone to prove to me that it could be done. Mentally I just couldn’t get there.

“Every time I line up on the track people just automatically expect me to win. You know, it doesn’t matter the situation, who I’m competing against or where we are, it’s literally that Hannah’s on the track and she should win. I think we are getting away from that, especially with the 100m with Kare and that’s the best thing that could’ve happened to me as I know we can beat each other. Everyone wants a bit of competition.

“I used to revel being the person at the front and believed I was untouchable but I wasn’t and I had to change my mindset and deal with that. It’s nice to win but it’s everything else that comes with it!”

Knowing what you know now, what advice would you give your younger self, just starting out in athletics?

“I think I’d give myself the advice that I give young people now. Just try everything and take every opportunity that you get given. You never know where it will take you and if you don’t love it, you’ll learn from it. For me, wheelchair racing wasn’t the first sport that I tried, it wasn’t the first athletics discipline that I tired (I started with seated discus), but if you’re in one then discover a new one as you may uncover a hidden talent!

“It’s great to have a team around you and it’s really nice to have someone to depend on but if it’s really important then just get on with it and stop waiting for other people to do it. If you’re not happy with your training plan or the exercises you think you should be doing in the gym, just ask the questions and make it right. Don’t just wait for other people to do it because it never happens.”

Who do you think are the up and coming stars we should look out for?

“In wheelchair racing in Britain there’s an athlete called Melanie Woods coming through. She’s a T54 so not my classification but I genuinely think she’s going to be an absolute star and she’s flying already which is great to see. Internationally in my class, there’s a girl called Robyn Lambird who’s an Australian athlete. She’s going to be fantastic, she just needs to work on her confidence a little bit but she’s going to be a really good sprinter and definitely one I should look out for!”