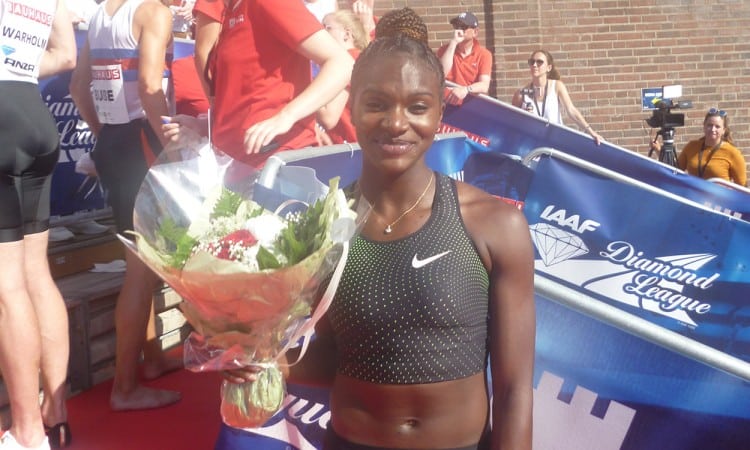 Cuba’s Juan Miguel Echevarría soared out to 8.83m, while Britain’s Dina Asher-Smith and Lorraine Ugen were also among the winners at the BAUHAUS-galan Diamond League meeting in Stockholm.

Echevarría’s leap was marginally wind-aided with a reading of +2.1m/sec but it still puts him sixth on the world all-time list of performances under any conditions and is the longest jump recorded since Iván Pedroso’s disallowed mark of 8.96m from 1995.

“Today, I wanted over 8.50m but I didn’t think I could jump so far!” said Echevarría. “I want to jump at this level for a long time but it’s early season so I will just take it all step by step. I’m not even thinking about nine metres – I will have to keep working very hard in order to jump that, it is a huge barrier.

“The pressure on me was good today and it was good competing against the top guys. Next, I will jump in London and Zurich.”

In the women’s competition, Ugen jumped a season’s best of 6.85m twice for her first Diamond League win, the British indoor record-holder claiming victory on countback ahead of Germany’s Malaika Mihambo.

“I came out trying to win and I knew I could get the big jumps in but because I was injured during the indoor season, I’ve been struggling to find my rhythm until today, luckily,” said Ugen.

“It was a great competition and it was nice to be competitive amongst some good girls. I’ve been injury-free for a while so I’m feeling better on the runway. Next, I’ll compete in Madrid and then the British Championships.

“I always want a medal in a championships so I hope to get a medal in Berlin (at the European Championships), but this year is all about having fun and enjoying competing.”

.@loralski after her 6.85m #StockholmDL win: “It was a great competition and it was nice to be competitive amongst some good girls. I’ve been injury-free for a while so I’m feeling better on the runway.” Report ➡️ https://t.co/lZBuGAUtmz
?: @stuartweir pic.twitter.com/KHwIOgfKH5

Over on the track, Dina Asher-Smith (pictured, top) was one hundredth of a second off the British 100m record she set in Oslo, clocking 10.93 (-0.1) to this time claim victory ahead of Oslo winner Murielle Ahouré who ran 11.03.

Asher-Smith is the only British female athlete to have legally gone sub-11 seconds for the event and now has three times inside 11 seconds to her name. Her 10.92 in Oslo had been run with a +1.6m/sec wind.

“Now I can go and recover and head home for the trials.”

In the earlier non-Diamond League 200m, Beth Dobbin again broke the Scottish record with her time of 22.83 taking 0.01 off the mark she ran at the UK Women’s League Premier Division match in Eton the weekend before. She finished second behind Ivet Lalova-Collio with 22.63. Anyika Onuora was third in 23.38.

There was another Scottish record broken as Jake Wightman clocked 2:16.27 in the rarely-run 1000m for third in a race won by Kenya’s Ferguson Rotich in 2:14.88. Wightman’s time beats Graham Williamson’s mark from 1984, while his fellow Briton Andrew Osagie was seventh in 2:17.18.

Turkey’s world champion Ramil Guliyev won the 200m in 19.92 as Britain’s Nethaneel Mitchell-Blake finished fifth in 20.47. World silver medallist Steven Gardiner of Bahamas looked like he might have tweaked his ankle off the bend and slowed to a jog.

To the delight of the crowd, home favourite Armand Duplantis won the pole vault with a clearance of 5.86m and went on to attempt a world under-20 record height of 5.96m. Duplantis – who currently holds that record with his 5.93, from May – beat USA’s world champion Sam Kendricks with a best of 5.81m.

After clattering barriers and finishing ninth in Rome, USA’s Olympic champion Brianna McNeal returned to winning ways in Stockholm, clocking a world-leading and meeting record 12.38 to win the 100m hurdles ahead of Jamaica’s Danielle Williams with a PB of 12.48.

There was another brilliant battle in the men’s 400m hurdles as Qatar’s Abderrahman Samba broke Diamond League, meeting and national records with 47.41 to beat world champion Karsten Warholm who again improved his Norwegian record with 47.81. Britain’s Jack Green clocked 49.73 in fifth and Seb Rodger 49.87 in sixth.

Commonwealth champion Fedrick Dacres won the discus with a world-leading Jamaican record of 69.67m ahead of Lithuania’s Andrius Gudzius with 69.59m.

World champion Maria Lasitskene continued her winning streak in the high jump but this time only on countback ahead of Olympic silver medallist Mirela Demireva as both athletes cleared 2.00m, a PB for Demireva. Britain’s Morgan Lake was eighth with a best of 1.90m.

» Results can be found here, while the June 14 AW magazine will include a report, photos and results