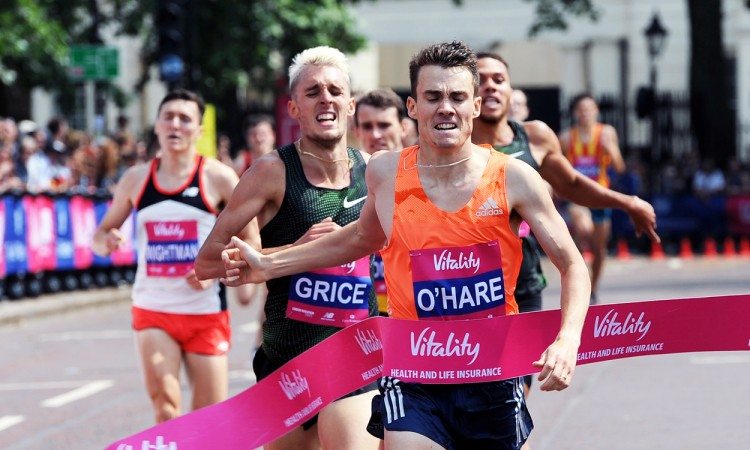 The overnight storms turned into a glorious sunny day at Sunday’s Vitality Westminster Mile which incorporated British Championships events in what was surely the best road mile event ever held in Britain and was the biggest in the world.

There was hope in the year of Roger Bannister’s passing that the men’s race could see the event’s first sub-4:00 but the top runners ignored the pacemaker and it became a tactical affair.

Former winner Chris O’Hare made a move in the last 400m but he said it was just to make others go early. Commonwealth 1500m bronze medalist Jake Wightman powered clear but he was unable to hold the pace – feeling tired having just come down from altitude – and he faded to fifth in the final short straight.

O’Hare, who was injured at the World Indoors and not fully fit at the Commonwealths, had the strongest kick and he won in 4:04 just ahead of Charlie Da’Vall Grice who got the same time.

800m specialist Elliot Giles again showed his potential at longer events with third in 4:05 just ahead of Zak Seddon who confirmed his recent steeplechase breakthrough in fourth.

The women’s race was also very tight with Commonwealth bronze medallist Melissa Courtney winning an exciting race in 4:35 just ahead of Sarah McDonald in 4:36.

The wheelchair races were won by six-time Paralympic champion David Weir and Nikki Emerson in 3:11 and 3:58 respectively.

While the senior mile races took the headlines there were also some high-quality junior British Championships races.

Even more impressive was Thomas Keen who followed up his European Youth qualifiers at 1500m and 3000m with a clear under-17 win in 4:15.

Ava White led a Blackheath and Bromley Harrier’s top four as she won the under-15 race in 5:05, with Zakia Mossi sharing the winning time.

Apart from the juniors the event also featured the British Masters Championships for the first time.

The women’s race was narrowly won by W35 Charlene Jacobs-Conradie in 5:12 from W50 winner Clare Elms who ran 5:13.

Altogether 8048 took part in the day’s events which were all run on a mile circuit starting on The Mall and finishing just in front of Buckingham Palace.

1984 Olympic steeplechaser Eddie Wedderburn won the Olympians’ race in which IAAF president Seb Coe finished around six minutes alongside Anthony Whiteman, who was using it as a warm up for the elite men’s mile.

Mo Farah was the starter for the 12 family races and jogged around in the final wave in just over six minutes.

There was a mascot race won by Bee Active of Everyone Active which claimed him a £1000 prize.

» See the next issue of AW magazine for more