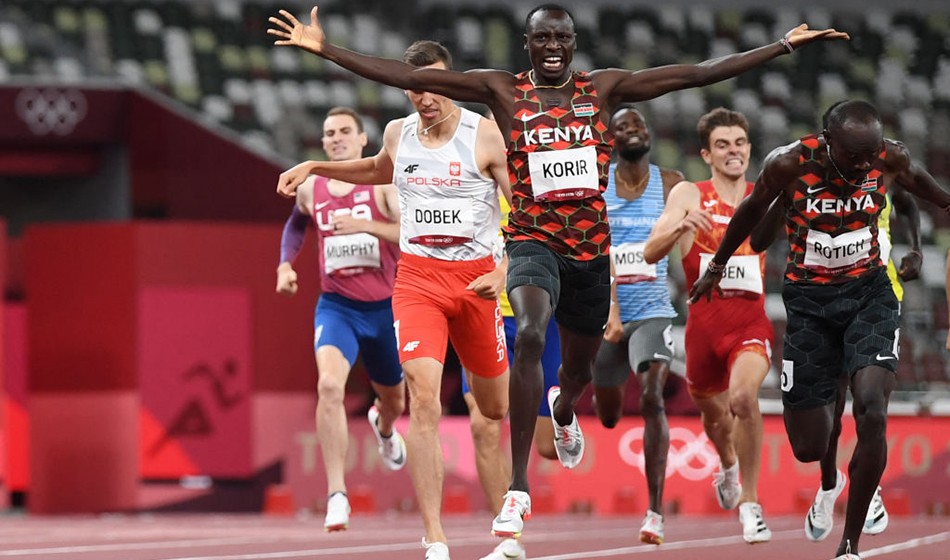 Kenya were not having the best of championships – a pair of thirds in the steeplechase and out of the medals in the men’s 10,000m but on Wednesday they went one-two in the 800m.

The winner Emmanuel Korir is 26 years old but USA can claim some of his success as the former NCAA champion had a great collegiate career.

Possessing great speed – he was sixth in the Doha 400m after a 44.37 semi-final and has a 44.21 PB – he has not previously coped with 800m championships racing having failed to make the final in both the 2017 and 2019 world championships.

He didn’t start 2021 in winning form, finishing third in Portland in 1:45.74 and then a slightly concerning third in the Kenyan trials in 1:46.05, which at least gained him a spot in the team for the Games.

He did not win in Monaco either but a 1:43.04 second place to Nijel Amos at least confirmed he would be a serious challenger in Japan.

He eased through the heats with a win in 1:45.33 but had the semi-final jitters again finishing second and only making the final by five hundredths of a second. That semi-final run was preceded by a quite farcical 400m heat in the morning where he exhibited acting not seen since the likes of ITV’s Crossroads in the 1960s as he pretended to accidentally false start so he could focus on the 800m.

There was no false start in the 800m but it might have enlivened proceedings. France’s shock finalist Gabriel Tual was the early leader at 100m in 12.6 but at 200m Australia’s Peter Bol went ahead in a reasonable 24.9 but then slowed dramatically to run the second 200m in a ridiculously slow 28.9.

It meant at 400m the time was a modest 53.8 with Korir and world leader Nijel Amos (54.0) well placed. The Botswanan, who had finished second in the legendary 2012 Olympic final, had been fortunate to be advanced to the final having fallen in his semi-final.

European indoor champion and former 400m hurdler Patryk Dobek, who must have been rejoicing in his decision after the previous day’s run by Warholm, was well placed on 54.2 alongside Ferguson Rotich Cheruiyot, who had impressed in the heats running the fastest ever Olympic qualifier.

Korir said: “The race wasn’t easy. I had to work extremely hard. This means a lot to me as I have been training twice a day and this is my best ever day in track and field. There was pressure as Kenyans back home have wanted us to win and we have won the event a lot.”

This is Kenya’s fourth successive Olympic title in this event and the sixth in the last nine Olympics.

He said: “This is a historic medal for Poland. I’m very excited and the bronze is a huge performance in a new event and a new future for me towards Paris 2024.”

A gallant Bol finished fourth in 1:45.92 just ahead of Spain’s Adrian Ben (1:45.96) with double world medallist Amel Tuka showing the speed he showed in the semi-finals to deny Elliot Giles making the final to take sixth in 1:45.98.

Amos faded to eighth in 1:46.41 but did at least beat US champion and Rio medallist Clayton Murphy, who never got involved and finished a deserved last in 1:46.53.