For 57 years, Brooks existed as a general sporting good company, then thankfully, they found running!

Brooks only make running shoes and they've been making great running shoes since the early 1970's. Today, they make some of the very best running shoes available. Without making them sound boring, Brooks make solid, no nonsense functional shoes for runners and lets be honest, that's all we need.

We've reviewed the Brooks range so here are the Best Brooks Running Shoes of 2020.

The Ghost is a firm favourite with many runners, making it one of the brand’s best-selling models. The Ghost remains a beautifully riding and well cushioned shoe. If a neutral runner, put it on your short list.

Check out our full review of the Brooks Ghost 12 here

BEST FOR MARATHON - Brooks Adrenaline GTS 20 (yes it's a trainer so not in the same category as Nike Next%, but for the masses - ideal)

Yes, we know it's a support shoe but the Adrenaline GTS 20 is so good that if are in the 99% who are not going to be in the top 100 of a marathon major then this shoe could be for you. It's supporting but if you're a neutral runner it'll work for you. It gives you a great balance lightweight smooth riding, plush and supportive cushioning. The Adrenaline GTS 20 is one of the best shoes on the market, anywhere.

Read out full review of the Brooks Adrenaline GTS 20 here

The Brooks Glycerine is the brands top of the range neutral cushioned shoe offering the most cushioned ride. Perfect for logging the long training mile required for the marathon runner.

Check out our full review of the Brooks Glycerin 18 here

Offering range topping cushioning and support. It's as simple as that. If you need support and have not tried the Transcend, put it on your short-list.

Check out our full review of the Brooks Transcend 7 here

A lightweight, everyday training shoe that can just as easily be used for racing and faster paced running. A good value, versatile shoe for those that want one shoe to do everything.

Check out our full review of the Brooks Launch 7 here

Brooks, the company, have been around since 1914 but it didn’t begin to make running shoes until 1972! It started out in the ballet and bathing business; we guess making bathing shoes for ladies who wanted to get from their beach changing huts to the sea in comfort…

Brooks moved into the sports business in 1921 making cleats for baseball players. Ten years later and via roller skating(!), they began to make American Football boots and at the end of the 1930’s they had expanded their offering to ice skates, gym, bowling, soccer shoes etc. I guess you could say that they were a proper sporting goods company offering sports shoes for the masses, and that’s where they stayed for the next 50 years.

Brooks say that their focussed changed in 1972 when they saw American, Frank Shorter, win the Olympic Marathon in Munich. I have mentioned this period before on other brand timeline histories, but this was an exciting time for US running. There was a jogging boom, major marathons were growing in number and size, new brands were coming on to the market and Americans were succeeding in the sport’s biggest events, thanks to runners like Frank Shorter and Bill Reynolds.

In 1974, Brooks release their Villanova running shoe. They make a great shoe straight out of the blocks and it cements their reputation as a running brand.

In 1977, Brooks launched the Vantage. This was a game-changer in running shoe technology. The Vantage was the first shoe to feature EVA in the midsole. EVA is much more responsive than the rubber used in the traditional shoes of the time. The other big feature was that the midsole featured a Varus Wedge. This was designed to reduce over-pronation, another game changing feature, and laughable as it may seem now, but the Vantage also had a removable sockliner that moulded to your foot. It was no surprise that Runners’ World voted the shoe their number 1 shoe of 1977.

The Hugger GT of 1980 was the first shoe to feature a Gore-Tex upper. The off-road runner featured a rugged outsole with the breathable but waterproof upper.

Your editor worked in a running store in the early 80’s (to support my running ambitions!) and I remember the range well. Brooks were gaining in popularity and reputation. Shoes like the Brooks Graphlex went head to head with the Nike Pegasus and featured a graphite heel counter. They made the Brooks’ Sting spikes which were as good as any available. They began sponsoring athletes and winning Olympic medals; it was an exciting era for Brooks Running.

In 1982, they launched the Brooks Chariot, a shoe that became the go to shoe if you were an over-pronator or just a big person. Beautifully made, the Chariot featured a duel-density midsole: firmer EVA to reduce the excessive pronation, softer EVA to provide a great ride. It replaced their Varus Wedge technology. The outsole was also dual density featuring harder rubber in high abrasion areas, softer rubber in other areas for a smoother, softer ride. This technology has only been tweaked since then and variations of this features in most modern running shoes today.

Brooks launch the Kinetic Wedge in 1987; a softer pad of foam under the ball of the foot. This allowed this area to drop lower when walking / running and is said to stabilise the foot as it allows the arch of the foot to arch more naturally. The Kinetic Wedge helped reduce stress-related injuries. Brooks had produced women’s specific shoes earlier in the decade, but the Kinetic Wedge shoe was the first shoe stated to be designed to be anatomically correct for the female foot.

The 1980’s was a great decade for Brooks but the 90’s was about to get a whole lot better. There are some great shoes in the Brooks line today; shoes that have a huge history going back through the years and bought in the millions by us runners. Two of those stalwarts were launched in the early 90’s – the Brooks Beast and the Brooks Addiction.

The Beast and the Addiction are Brooks’ most successful shoes. The Beast was aimed at the runner needing maximum motion control and it also became a massive hit with the bigger runner due to its strength. The Beast had an exceptionally strong heel counter, numerous suede overlays through the midfoot saddle for support. It featured the brands’ new Progressive Diagonal Rollbar to counteract over pronation. The Addiction was the take down version, the baby beast if you like.

Two years later, the Adrenaline GTS 1 was launched; the baby beast! GTS stands for ‘Go To Shoe’ and it has been for millions of runners who need a degree of stability. The Addiction had become a big hit but running store retailers were recommending that a lighter, more flexible stable shoe might also be required for those who just need a bit of support. The Adrenaline GTS 1 also featured the Progressive Diagonal Rollbar but the Adrenaline delivered a smoother ride and it has now become one of Brooks’ best-selling shoes.

Shoes were tweaked over the next decade, more a case of “if it ain’t broke don’t fix it”. Technologies were launched but it wasn’t until 2006 until they launched a tech, the DNA of which can be found in today’s models – MoGo.

MoGo is a polymer-based material that is much more environmentally friendly to produce – running shoe manufacturing is a ‘dirty’ business and traditionally, environmentally unfriendly. MoGo offered more cushioning, energy return and durability. A year later, BioMoGo was released; the worlds first biodegradable midsole foam. Amazingly, Brooks share the tech with the competition in a bid to keep things green.

Their PureProject line was launched in 2011. Lower, lighter, more stripped back but still biomechanically sound, the line was designed to offer that barefoot feel but with enough cushioning to protect you on your faster runs.

Running shoe technology has tended to correct runners gait issues. The Brooks Transcend was launched in 2013 and took the approach of trying to support the foot through its natural motion. Instead of trying to stop a motion, Brooks incorporated their GuideRails system in to the Transcend, a system used on other shoes today. The GuideRails are an extension of the midsole if you like; strips that rise up and surround the footbed. They help to just steer the foot through your natural gait through to toe-off and are now featured in a number of the brands’ shoes such as the latest Bedlam and Adrenaline GTS. The GuideRail system replaced the Progressive Diagonal Rollbar used in the earlier motion control models.

Brooks have always been at the forefront of over-pronation shoe design. The latest shoes also feature segmented crash pads. These can be found on shoes of other brands but work as if they are independent parts linked to deliver a cushioned brake designed to slow the rate of pronation. As you roll through your gait, the parts work to deliver a smooth and controlled transition.

Brooks followed the trend towards energy-return with their DNA AMP midsole material in 2017. The material is encased in a ‘skin’ so that energy expelled upon impact is returned upwards to the runner. DNA AMP is Brooks’ most energy responsive midsole material ever and is featured in the Brooks Levitate.

DNA Loft is a blended material – foam, air and rubber blend to make Brooks’ softest material. It delivers a luxurious, comfortable ride that is still responsive. It is also durable and doesn’t break down easily. This means that shoes containing DNA Loft offer decent value for money. The material can be found in the Brooks Ghost and Brooks Glycerin models.

We rate many of the Brooks shoes highly, enough to put them in our Best Shoes of 2020 feature. Find out which made the cut for the 'best of the best'.

Brooks only make running shoes these days. Long gone are the ballet shoes and football cleats and we’re thankful for it. Long may it last! 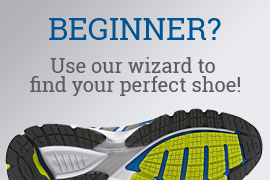