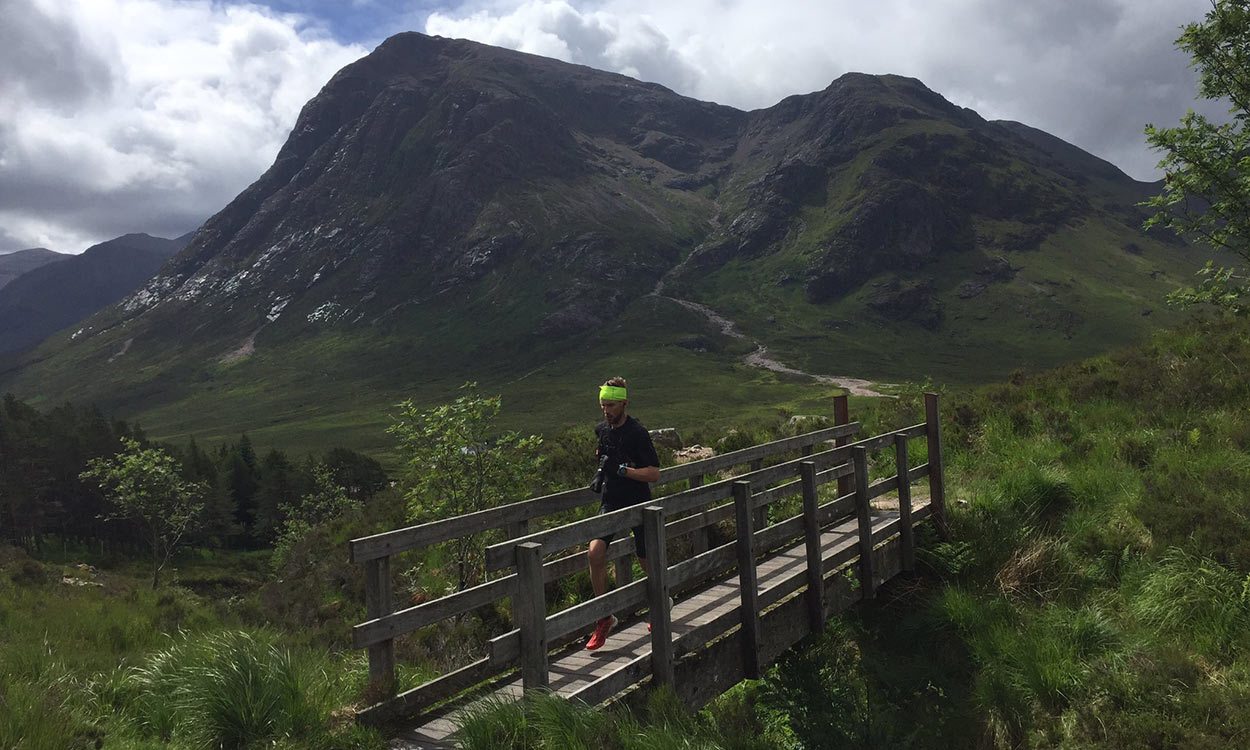 The passengers getting off the last train from Glasgow tend to do at least one double take at the sight which greets them.

Coming out of the station at Milngavie, a small town which lies just to the north of Scotland’s largest city, the bemusement on the faces of the Friday night revellers is clear as they find themselves having to unsteadily pick their way through a crowd decked out in all manner of running gear and armed to the teeth with hydration packs, compression socks and head torches.

In fact it’s not even really Friday night any more by the time this scene is played out. It is after midnight and a safety briefing is fast approaching.

The gathering which these travellers have unwittingly happened upon is the start of the West Highland Way Ultra Race, an event which begins at a somewhat unremarkable pedestrian underpass but unfolds over a 95-mile long course which takes in 14,000 feet of ascent, a truly spectacular landscape and finishes in the shadow of Ben Nevis in the highland town of Fort William.

Every June, on the weekend closest to the summer solstice, and after those instructions are issued in that train station car park, the 1am starting hooter is sounded to unleash some of the hardiest running souls it is possible to find as they head off into the night in search of adventure.

Some have been through this many times before. For others, it’s the first attempt at going in pursuit of the sought-after engraved crystal goblet which is presented to every finisher.

One such debutant this year was a 27-year-old Aberdonian called Rob Sinclair, a man who was already having a good year after he broke the course record for the Highland Fling, a 53-mile race run over the first section of the West Highland Way footpath, in April.

Few expected the performance he produced, however, when he returned to run the whole thing.

The furthest Sinclair had run previously was 70 miles and many participants past and present will tell you it can take time to master everything that will be thrown at you during this highland journey.

International ultra runner Paul Giblin’s record of 14 hours, 14 minutes and 44 seconds – which he set in 2015 – was expected to stand for years. Sinclair, however, caused many a jaw to drop by running 13:41:08.

One of the few he didn’t surprise, however, was experienced ultra runner Mike Raffin.

“I don’t really have a coach but Mike is one of my really good mates and has been like a mentor,” says Sinclair. “He’s been really helpful this year and he and his wife were my support crew. About three weeks before the race he said to me he thought I was going to run sub-14 hours.

“Mike’s prediction was 13:48. I ran 13:41 but, given how steadily I was able to go to run that time, I would say there’s definitely scope to improve that.” 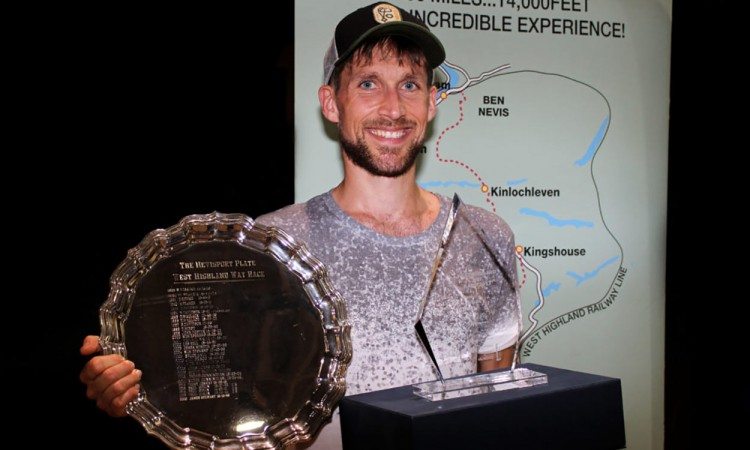 Sinclair was a keen footballer who always ran to maintain fitness. It was only around three and a half years ago that the football boots were ditched completely and he joined Garioch Road Runners. After a few events on the tarmac, he entered the 43km Lairig Ghru hill race – and promptly found his true sporting love.

“I did the Lairig Ghru as my first marathon and I was 11th,” he says. “I’d always done a lot of hiking with my grandad and my pals and I just instantly thought ‘I’m going to start running in the hills’ and that was it.

“Now I very, very rarely train on the road. I try to do all my speedwork on the trails as well.”

He adds: “I think I’m maybe a bit different in my ultra training – I go for a hillier approach and will do a lot of climbs as opposed to lots of flatter miles all the time.

“I just really like long days in the hills – big back-to-back runs are my main thing at weekends. Perhaps that gives you more strength in the legs but the fact is that I like it and it doesn’t feel like a chore.

“I find that hillier stuff engages me and it’s what I like doing all the time. It definitely helps that I can get over that terrain at a good pace.

“I also really like the challenge of ‘how fast can you go over that sort of landscape?’. With running in the trails and the hills it’s more about the experience than just the pace. I don’t really run on my watch pace – I run more on feel.”

Sinclair’s instincts seem to serve him rather well. After all, he sealed West Highland Way victory by over three hours.

The winning margin perhaps could have been more, too, but for what he calls ‘a shaky start’.

“I was running with another guy,” he says. “It was dark and maybe you’re still a little bit delirious from not sleeping but we went off course by a couple of hundred metres. People were shouting and we had to run back. I think I pretty much had to run past everybody in the race to the front again.

“I probably wasted a little bit of energy doing that but I think that was quite good, because it woke me up and got me really engaged.

“It will never happen again, though!”

He certainly didn’t look back from that point onwards and it is perhaps one of the most impressive aspects about Sinclair’s performance that, with no challenger in sight, he had to look inward for motivation.

“It did become more about me against the clock,” says Sinclair, who had to battle with fierce winds and heavy rain on much of the route. “It was a race but it was more about me taking on the times rather than anybody being close and pushing me.

“I didn’t really care – I was just really focused and I was just going for it.

“I tend to race quite hard and I think it would be quite different if I was racing in Europe or somewhere like that because there I’d probably end up hanging on to other people.

“If I was to go international I’d maybe have to think more about strategies and how to run with other people rather than just thinking about the time. I think it would change everything.”

“You go through dark spells but, when you come out of them, the runner’s highs are an incredible feeling”

Thoughts of looking to continental competition have certainly crossed Sinclair’s mind but he has time on his side and no desire to burn himself out by reaching for too much, too soon.

And, while he may have made it look easy, taking on the West Highland Way was not without its significant challenges.

“For most of the race you are enjoying it but there are points where you just have to go to that dark place,” he adds. “I did have my music to listen to but I didn’t do it very often as there was too much to look at. Most of the time I was just being in the moment.

“I try to stay in the moment and, when the pain comes, you’ve just got to remember that you’ve trained for months. All the stuff that’s happening in the race is only temporary. It does hurt for a few days after but there’s no point leaving anything behind.

“That’s how I approach it, anyway. When I get to a moment where I’m in a dark place – because you do go through peaks and troughs – I just try to remind myself how much effort, how much time and how much training I’ve put in just so that I can get through it.

“And the thing with ultras is that you go through dark spells but, when you come out of them, the runner’s highs are an incredible feeling.

“At times, you feel like your body is brand new again. You can be at mile 80 but you feel great!”

Breaking that second ultra record of the year made Sinclair feel even better. It has also got him thinking about a race strategy which might not fit with the received wisdom about ultra distance events but seems to work rather nicely for him.

“I’m probably not that sensible in the way that I go out really fast, and a lot of people say that’s a bad thing,” he admits. “But I find it just gets me going. I try and have faith in the training I’ve done, just go out quite hard and not be scared of doing that. You don’t want to blow up – and I’m certain that will happen to me in the future – but it’s about learning your capabilities, isn’t it? It’s about learning what I can do and, over the next few years, seeing where I can go with it.

“After things like this you do wonder what you could maybe do and it’s a cool, kind of surreal, feeling.”

» This feature was first published in the July edition of Running Monthly magazine. Check out Athletics Weekly’s monthly guide to running in the first edition of AW each month