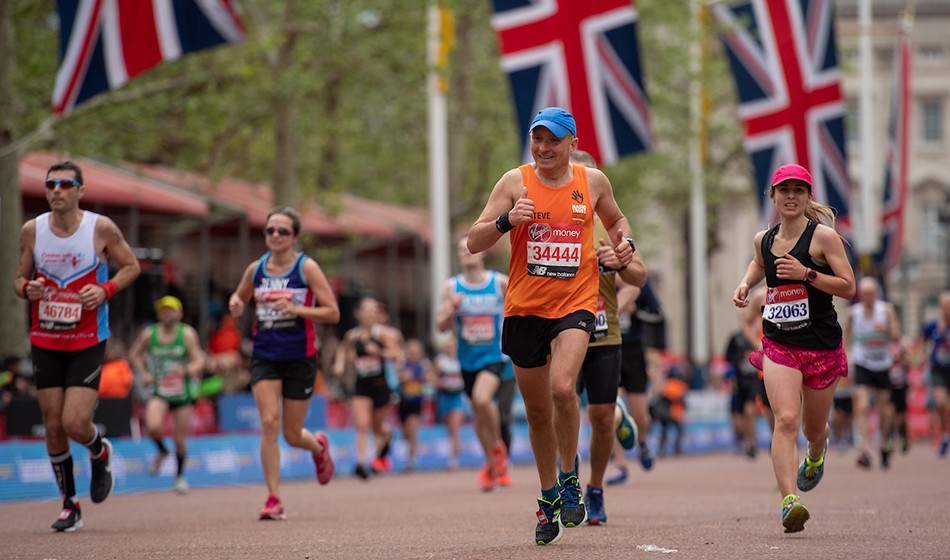 Over that period I did manage 60 sub-3hr marathons, the last of which was in 2017, and at the time that gave me a world record span of 41 years from my first to last although quite a few Americans have since bettered that and possibly London ever-present Chris Finill will break three this year (having run his first sub-3 on May 5, 1979) and take his span to 42 years. His last one was in April 2019 and it will mean he will become the first British or European runner to achieve a sub-3 in six different decades.

So with 75 marathons behind me over 45 years, I do have, in theory, a good knowledge of the event. It won’t help me much this year – in almost certainly my last marathon having been diagnosed with pulmonary embolism (blood clots) in both lungs earlier this year which did nothing for my marathon training and means I will be lucky to run double my PB (2:29) having gone into every previous marathon at least expecting to break three hours.

Course changes
This year’s mass course is pretty much the same as a few years ago with a few minor changes and runners will need to keep a look out for the increased number of bike lanes on the course. There will be no out-and-back section along Aspen Way around 21 miles this year as there is an extra loop around Canary Wharf which has not been available in recent years.

Fundamentally though it is a reasonably quick course apart from the sharp turns with a fast downhill third mile. Stay in control and if you do gain a few seconds and feel you have picked up, try and get back to your earlier slower pace as you go towards Greenwich.

Pacing
In terms of pacing, my marathon record suggests near even-pace is still probably the most efficient method. A faster second half is a good way to do it but you do have to be very fit and have exceptional endurance to run as fast from 13 to 26 miles as you do when fresh and for most runners it’s just a case of hanging on whatever time they go through halfway in.

That doesn’t mean it is good to get lots of time in hand as the easier and fresher you feel at 20 miles, then the easier you will find the last 10km to the finish. Even runners who have run marathons for 40 plus years still make mistakes and struggle in the last few miles if you overreach yourself and are too ambitious in the early stages.

Conserve as much energy as you can to run stronger in the second half. That doesn’t mean you will speed up but your de-acceleration will be less and you will feel better and less likely that you will be hanging on for dear life.

Injury and illness
If you have had an injury or illness in the build-up, be realistic and adjust your aims. You still might well be in shape to run a good 5km but a marathon is a different matter and the race will find out any weaknesses in the last six miles.

Logically, if you are carrying an injury you shouldn’t do it and any injury is not going to clear up during a marathon but get much worse and potentially become a long-term problem.

Target times
Make sure your goal is realistic. That is, if you ran a flat-out half-marathon in 1:31 in the build-up, you aren’t going to run three hours even if it is your long-term target. Adjust the target and go for the faster time next time when you are fitter and stronger rather than attempt an impossible target and have a totally miserable second half and end up with a much slower time than if you had gone out slower.

Fluids
Even though it won’t be as warm as in previous years, you will still get dehydrated and need to top up fluids. Drink regularly but not huge amounts at every drinks station as drinking too much can be more dangerous than drinking too little.

Clock watch
Regularly check your watch and be careful you don’t suddenly pick up in the better supported areas. Most people in London because of the high buildings and tunnels tend to find their watches over measure the distance and just because your watch says you have run 40.8km when you reach the 40km mark doesn’t mean you have run 40.8km so you may need to run a quicker pace than the watch suggests you are running to reach a suggested target. If you have a target use a pace band or write times on the arm and compare that with the actual markers rather than the distance your watch suggests.

Wind effects
This year’s weather looks like it will be dry – with around 12 degrees with a 12mph south-westerly which is not ideal (overall the race goes in a westerly direction) but much better than the forecast earlier in the week.

It is calculated that running into that sort of wind makes around 30 seconds a mile difference to a 4:00 marathon pace runner in normal circumstances but as the race is so crowded around that area of the field it is unlikely that it would have anywhere near as much effect but the wind is gradually picking up during the race and could be a negative factor in later miles alongside the Thames. 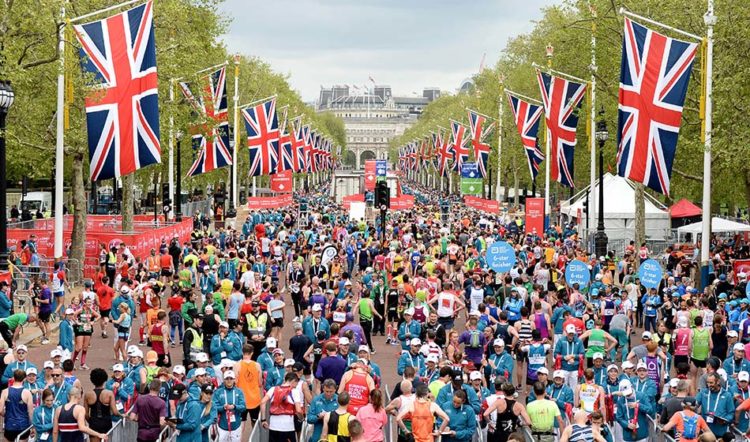 Halfway analysis
At halfway it is good to rain check how you feel. If you feel strong and in full control then you can keep going for your original target, but if you are struggling then adjust and go for a secondary target.

The second half
The first half should be relatively easy unless you have inexplicably chosen to go for a half-marathon PB. The second half will really test your training plus your levels of concentration and your mental resolve.

If you do struggle then try and relax and think of all the training you have done and why you want to run a fast a time as possible. If you can try and use other runners to focus on or run with then it might make it slightly easier.

The last mile
Even if you have been struggling, most runners can pick up a little when they get into the last mile and know they are in the final few minutes of discomfort and the crowds are usually good there and everyone is encouraging. If you feel good, gradually up the pace as you reach the 800 metres, then 400 metres, then 200 metres to go signs and drive as hard as you can and see how many runners you can overtake.

Post-marathon
Try and get fuel back inside you as soon as you feel able and make sure you re-hydrate, but this does not mean just lots of beer! You may not feel like food straight away but the quicker you eat the better you will recover and focus on carbohydrates.

Walking may be painful initially but a short walk will help your recovery and is better than lying down initially.

It is also a good idea to try a short walk later in the evening and get the blood circulating and a long soak in a bath is good but if you feel your legs are traumatised ice them before you get in too hot a bath.

Days after
Usually you feel worse the day after the marathon and even worse the next day before there should be a gradual recovery. Try and get as much sleep as you can and top up your sleep with naps.

A swim or bike ride will be a lot easier than a run initially. Occasionally if you had a very bad last 10km, it can be until Saturday before you can even jog again.