How they train – Harry Coppell 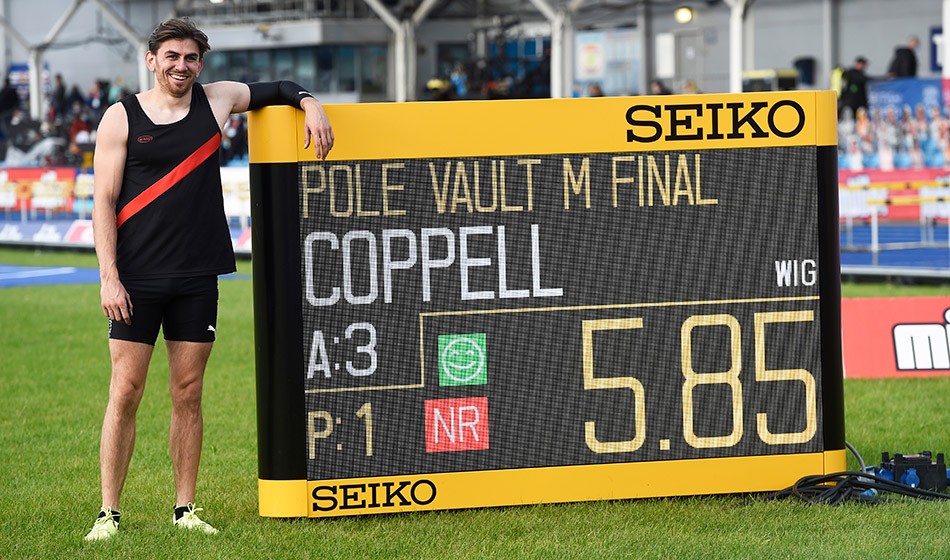 Less than 12 months later, the former World U18 champion defended his national pole vault title with a British record of 5.85m at the 2020 Müller British Championships in Manchester.

“Before I moved to Scott I’d been with the same coach (John Mitchell) since I was 12 years old,” explains Coppell. “He was an amazing technical coach and I’d always been a good vaulter, but the formal physical preparation around the pole vault – the programming, strength and conditioning, running etc. – wasn’t what it should have been.

“Now, being put into a situation where I’m training as a professional next to Holly (British champion Holly Bradshaw), has massively helped me improve. Not only that, but Scott’s knowledge of the run-up and how the physical preparation of pole vault works – it’s perfect for me and I’ve become a better athlete because of it.”

The 24-year-old Coppell believes that, while he’s always had good technical input, the clarity regarding each session’s objectives has been key to his progression since he linked up with Simpson.

“Before a vault day we always pick a focus – whether it’s the run-up, the pole work, trying to move bigger poles – then we come up with a plan to achieve that,” he says.

“For example, my focus ahead of the British Champs was to get onto my competition run-ups, so fast progression from doing nothing to full run-ups.

“Aside from a pole vault session, I’d say multi-jump and multi-throws sessions.

“I’m quite an explosive athlete, and from a jumping perspective I’ve always been quite springy. We do explosive throws quite a bit for activation and, if they’re good, I know I’m in decent physical shape.

“I quite enjoy the gymnastic part of the training, too. Not so much the strength side, but the explosive stuff like flips. It’s a great feeling to be able to do things like that, especially when I’m not from a gymnastics background.”

“I don’t really enjoy circuits, or core and abs routines – the stuff that we do a lot of over winter. That feeling when your body is shutting down…it’s not my kind of fun.”

Sometimes what you want, isn’t what you need…

“Pole vault is the kind of event that you try when you’re younger and you fall in love with it instantly,” says Coppell. “You can easily get caught up in it and jump too much, but that’s not always the right thing to do.

“One of the best pieces of advice I could give to a young athlete in any discipline is to focus on what’s needed rather than what you want to do.”

*Based on a training block where the group is focused on pole vault and not on competition. Depending on their focus, the sessions can move around

“I think most vaulters would say that if you could jump six days a week without doing anything else – and as long as you were performing well and not getting injured – then you would, but you have to prepare your body to be ready for the impact and forces it’s going to go through,” says Coppell. “To be a good pole vaulter you have to be a sprinter, a weightlifter and a gymnast all rolled into one.”

» Monday: pole vault day mixed in with some sort of running e.g. rhythmical runs. Nothing too intense. “If we pair a vault day with running it would probably be more technical runs, so instead of just hitting it hard it would be more upright tempo stuff or sometimes running with the pole.”

» Wednesday: either an easier day or a gymnastic day. “Our active rest day moves around, depending on our schedule,” says Coppell. “It’s usually either Wednesday, Thursday or Friday.”

» Thursday: probably another vault day (as Monday), or active rest

» Friday: as above. “We do a lot of gymnastics and circuits – the back half of the week really depends on what our focus is.”