How they train – Andrew Morgan-Harrison 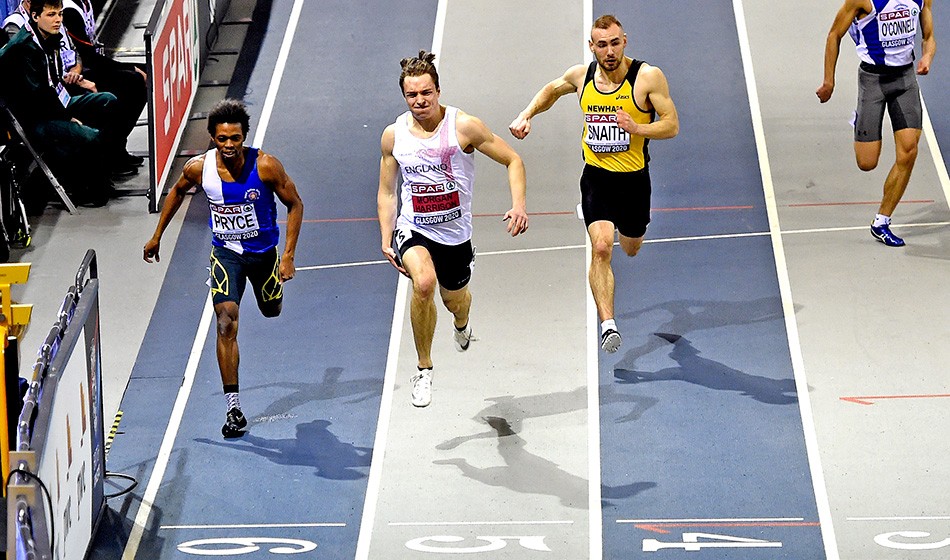 The stadium falls silent and six men settle into their blocks for the final of the British Indoor Championships 200m. Blasting off on the outside is the blue-vested Nicholas Pryce from Royal Sutton Coldfield. At the halfway stage, the man in lane 5 is edging it, with the commentary team noting that a threat is emerging from the inside in the form of the yellow-vested Ben Snaith from Newham and Essex Beagles.

At that point, the Humberside man clutches his hamstring in pain but despite “it looking like the bits were failing apart and he was about to unravel at the crucial moment”, Andrew Morgan-Harrison remarkably manages to maintain some kind of form for the last 50m to clinch a dramatic gold medal.

He’s in pain but the winces soon turn to smiles as a ‘British champion’ bib is slapped on his vest before he faces the cameras raising a Union Jack flag above his head.

So let’s meet this regular guy – ‘Andy’ to his friends – who usually just likes to chill with his girlfriend at the cinema every week or and who spends his time searching for quirky restaurants as a self-confessed “foodie”. I ask the Kingston upon Hull athlete to reflect on his success. Enthusiastically he responds: “After becoming BUCS indoor 200m champion and setting a new championship record by nearly 0.4 seconds (20.66), I was going into the British Indoor Championships confident but still hungry for more success.

“For my heat and semi-final I just wanted to get out of the blocks safely which I did, highlighted by my reaction times of 0.295 and 0.277 seconds respectively. Then I just wanted to come into the home straight ahead so I could conserve energy by easing off over the last 50m. I was happy with my execution throughout the rounds.

“When the final came I unfortunately felt a twinge in my hamstring coming out of the blocks and so I knew I had to run slightly reserved and come off the final bend in the lead which I did and just try and hold that position to the line. I managed to cross the line first which is what championships are all about.”

After placing an inauspicious seventh in an English Schools 100m final back in 2016, how did he come to athletics and was he a ‘multi-sporter’ at school? With a grin he says: “I’ve always enjoyed running fast. My earliest memories of this were when I was three. My gran and I used to walk her dog and on the walks I would start at one lamppost and run to the next and she would time me, albeit not very accurately. Whatever time I got I would then try and beat it between the next two lampposts.

“I always looked forward to sports days at school and PE was my favourite lesson. I pretty much won every race I can remember although a few of my school friends might disagree. My primary school head-teacher told my mum that I should join an athletics club, so I did just that and started when I was 11. My focus when I was younger however was primarily on football which I started when I was six and although I could run down the wing my shots ended up being more like crosses most of the time and eventually I stopped playing football in my mid-teens to focus on athletics.”

Interestingly, after being guided by Pam and Bob Piercy, his current coach, Alex O’Gorman, comes from an endurance background.

“He works as a physiotherapist in elite track and field and cycling (previously for British Athletics) and has postgraduate qualifications in strength and conditioning and has spent time learning from a number of top level sprint coaches,” Morgan-Harrison tells me. “He takes a very individual approach, blending the requirements of the event with the individual profile of the athlete.”

I press him as to what his thinking is when it comes to having a double peak periodisation plan for an indoor and outdoor season.

Thoughtfully he responds: “Double peaking is something that fits me as an athlete. It allows us to modulate training and naturally cycle through different stimuli without spending too much time away from any one aspect of training. Plus, competing exposes me to certain intensities I don’t get exposed to in training.”

With a 100m PB of 10.71, will he continue to attempt to combine short sprints with the 200m? “My times suggest I am better at 200m than I am at 100m,” he acknowledges with candour. “However, I haven’t run 100m injury free for a couple of years so I believe I can bring that 100m time down by a few tenths. There have also been talks of 400m which my previous coaches would love because they always said I was a 400m runner.”

Currently in his final year studying sport rehabilitation at the University of Hull and with hopes of setting up his own injury clinic in the near future, what are Morgan-Harrison’s long-term ambitions in our sport?

“To represent Great Britain at the Olympics,” he says. “I am yet to gain a GB vest and hopefully that is something I can tick off soon.”

He ends by returning to that hamstring tweak incurred when he took the gold on the Glasgow boards. “I’d much rather focus on staying injury free and being in a good position to race well when it matters and that should hopefully help me achieve my long term goals,” he says.

We say our goodbyes by watching a re-run of his win. With the BBC commentary team noting that “he dug in and just about managed to hold it together to the line”, we can expect even greater things from a fully fit and ‘firing on all cylinders’ regular guy who is articulate both on and off the track.

Sample week of training in light of the current coronavirus pandemic

Morgan-Harrison advises he is currently running to time and not distance.