The path to gold 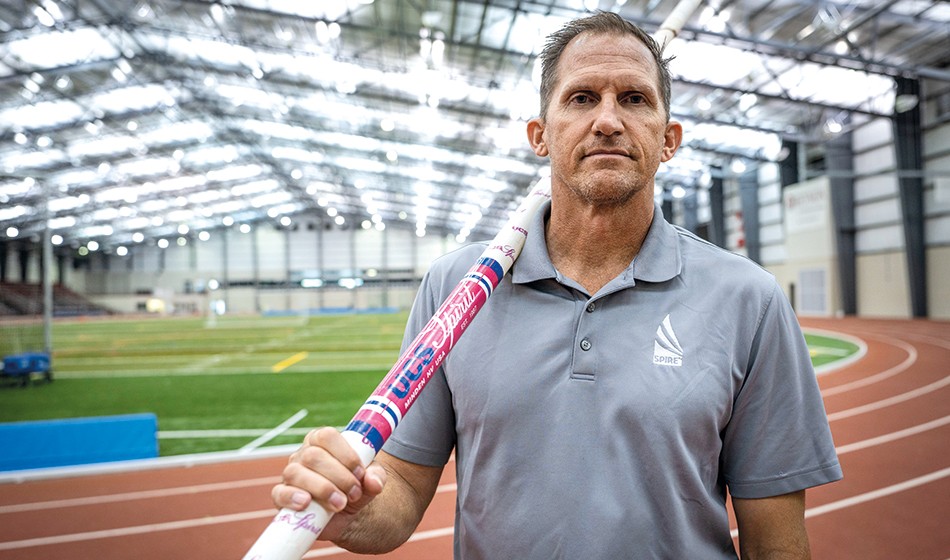 Tim Mack, 2004 Olympic pole vault champion and SPIRE coach, outlines the mental approach which took him to the very top

It was the year 2000 and I was sitting in Hornet Stadium in the Sacramento heat, sick to my stomach at my second failure to make the USA Olympic team. At 27, I was in my prime, had put my life on hold, was in the top five pole vaulters in the US and had jumped 5.80m. Now, I was watching my competitors celebrate the realisation of their own dreams.

Months passed and the pain began to subside. The way I saw it, I had two options. My first option was to quit. The second was to try a third time and do everything possible to make it to Athens 2004.

I had this feeling deep within my soul that I had what it took to be an Olympian. I was not the fastest, strongest or most physically gifted. I would also be training on my own and writing my own daily workouts for the next four years, while still working a full-time job as a fitness trainer. Still, I had to try again.

My first call was to my pole vault coach from the University of Tennessee, Jim “B” Bemiller. He went on to coach me twice a week and kept me grounded and focused.

Next, I called sport psychologist Joe Whitney at the University of Tennessee. Joe had helped me in the past with some basic mental training and now he agreed to help me with a total transformation in the way I talked, thought and even carried myself.

My first step was setting the goals that would guide me throughout the next four years. The biggest goal I could think of was to win the gold in Athens. Joe said I needed to see it every day. I had to break down those barriers and it had to become part of who I was. I chose [email protected] for emails and ended up typing it every day for the next four years. It was now a part of me.

I set 32 major goals for the next four years. If I succeeded, then I was on track towards “goldnathens”. If I failed, I would use the failures to learn. I failed at 19 of them, but they weren’t disappointments; they were teachable moments.

I qualified for the 2001 World Championships in Edmonton, placing ninth, and qualified for the Goodwill Games in Brisbane, Australia. Two weeks ahead of the Goodwill Games, I developed shooting pains on both sides of my legs and couldn’t run. Doctors could not figure out the problem, so I decided to stay in the hotel for two weeks, stretching and using ice and anti-inflammatories. I mentally rehearsed my vault thousands of times during those two weeks, walking my rhythm and counting my steps in my head, imagining I was in the air and vaulting in real life. 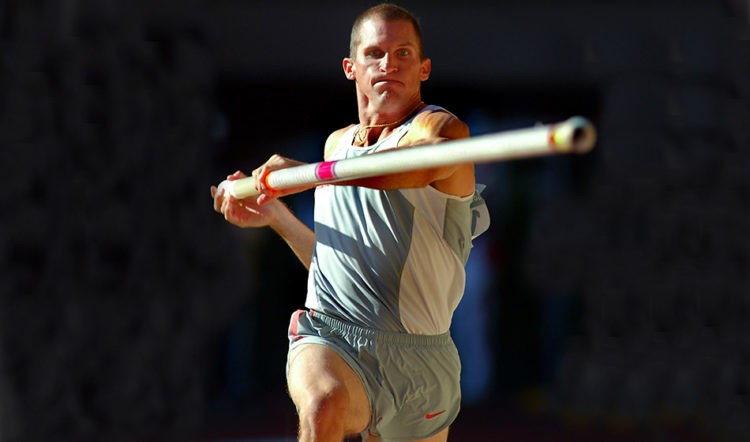 I ended up winning the Goodwill Games, tying my personal best of 5.80m! I beat those that beat me at Edmonton, plus I won $20,000, which meant I could now quit my personal training job and dedicate more time to my craft.

After watching video footage of Edmonton, I realised I had an enormous technical flaw that would take years to fix. Still, “what was going to get me closer to ‘goldnathens’?”

Taking the risk of improving this weakness caused a decline in performance in 2002 and 2003, but I still managed to make the 2003 World Championships in Paris. I tied for sixth, which was better but still short of my goal. Analysing this competition, I realised I had to correct my running posture. This would take a while, and I would be cutting it close to the Olympics. Again, “what was going to get me closer to ‘goldnathens’?”

Come 2004 I was making the final changes on my technical and running flaws. One day, I went to see Joe for my usual mental training session. He said, “I have something to tell you, Tim. There is a chance you might not make the Olympic team. It just might not be your day.”

I could not believe it. My confidence was immediately shattered.

Then, Joe said, “Tell me, why will you make the Olympic team?” I started shouting my reasons at him. “I put my life on hold, created my own training programs and became an expert in running, weight training, gymnastics and plyometrics. I showed up on time with no one watching, kept good people around me and never cut any corners. I typed ‘goldnathens’ for four years and looked in the mirror every day, telling myself, ‘you are the greatest pole vaulter to ever live!’ I created my own running sled from scratch, invented hundreds of drills, watched thousands of hours of video and stayed true to the sport and my dreams!”

Joe replied, “Good. I just wanted to make sure you knew that, Tim.”

Now, at SPIRE Academy, I have the honour of passing along my knowledge, experience and struggles with the next generation of athletes on a daily basis. It’s a true joy to watch them go through some of the same challenges that I faced and apply my learnings to help make them better athletes, both mentally and physically.

Years later, I realised what my journey to ‘goldnathens’ really signified. It happens to be the creed of the modern Olympic Games. Baron Pierre de Coubertin, founder of the International Olympic Committee, said it best: “The most important thing in the Olympic Games is not to win, but to take part, just as the most important thing in life is not the triumph, but the struggle.

“The essential thing is not to have conquered, but to have fought well.”

» This article first appeared in the December issue of AW magazine, which you can buy here